Last month we visited Knebworth House in Hertfordshire, to watch Medieval Jousting being demonstrated in the grounds. As eagle eyed readers will know, Knebworth is a large stately home just outside of London, which is most notorious for hosting a variety of rock concerts from the 60s through to the present. In fact, the house itself is a funny old beast that looks like it last received love and attention in the 1890s (that’s totally unfair, I know the estate does a lot of work on the house). 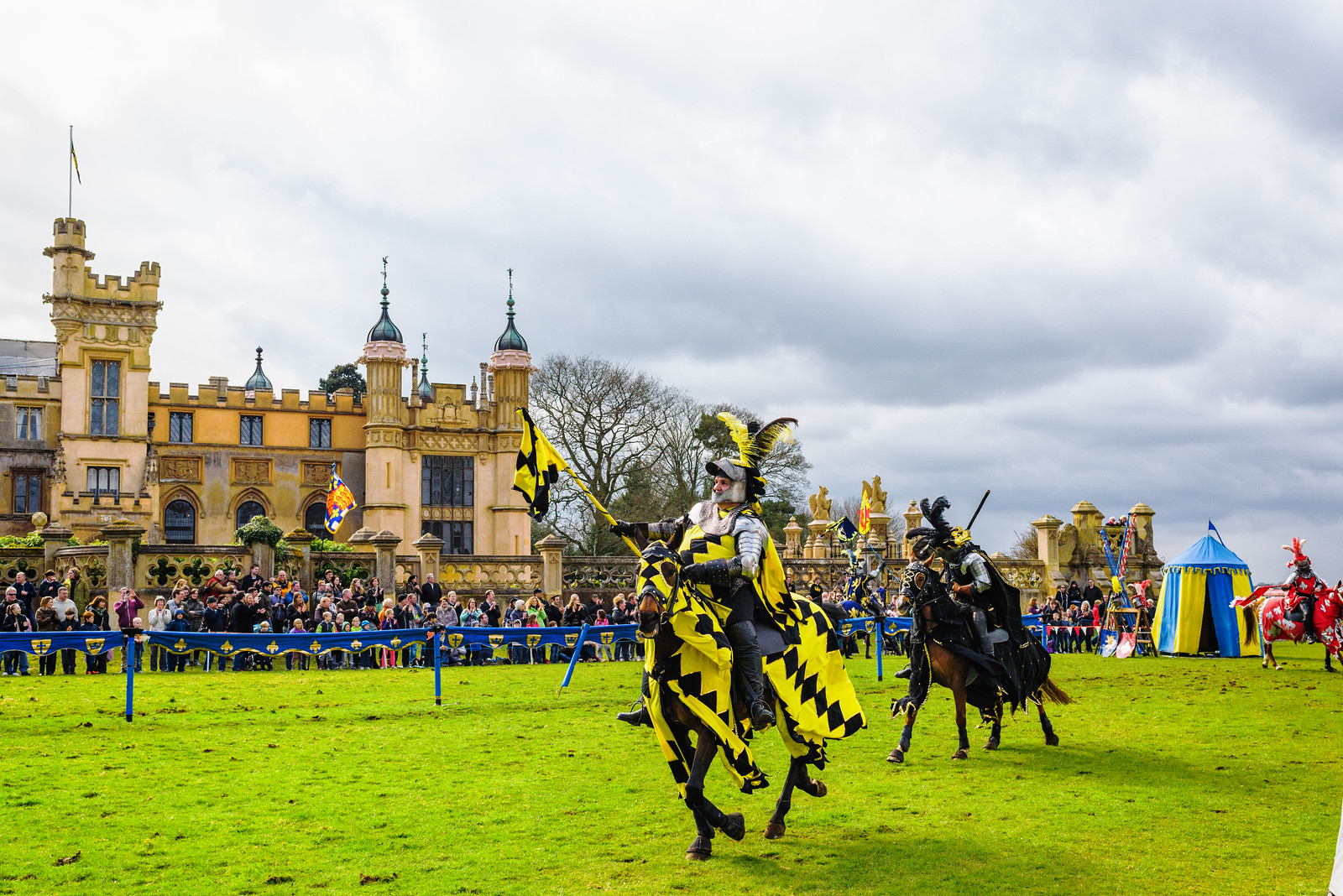 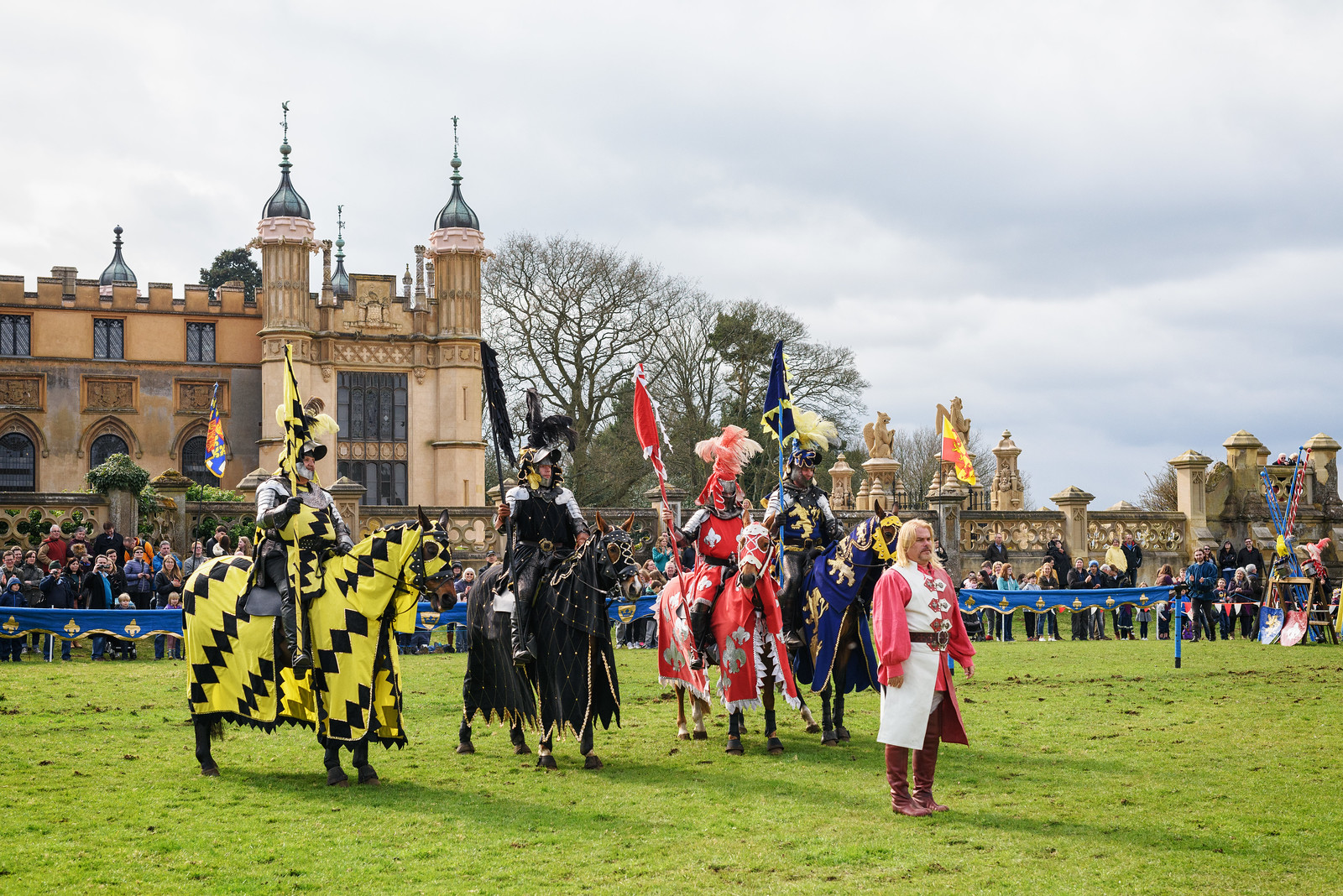 Last time we were here, we visited the Dinosaurs in the park, and this time we visited too. Unfortunately, this visit to the dinosaurs was somewhat spoiled by my son pulling the pin on a poo bomb. For those who don’t know, this is what happens when a toddler announces in a low voice that he needs the loo. It’s generally associated with a madcap rush to the nearest toilet ideally within about 5 minutes! Needless to say, someone did this funnier than me – this sketch from John Bishop* is priceless:

“Everyone knows if you’ve got a toddler, and the toddler turns to you and says, “I need a poo” that means he could have a poo now, or he could have a poo next Tuesday. You’ve basically got a poo bomb in your hands. You don’t know what to do, you don’t know whether to take the risk and walk, or just run in a panic to the nearest place, to get rid of this potential poo.

I picked him up in the Trafford Centre and run through the shops. There’s a place that I never knew existed in the Trafford Centre. I come to this place, they must have them in shopping centres all over the country. It said on the door, “family toilet.” I walked into the family toilet. It WAS a family toilet. It had the little toilet and the daddy toilet. I thought, “This is wonderful.” I sit him on the little toilet. … It’s bonding, the modern way. The family who shits together stays together.” 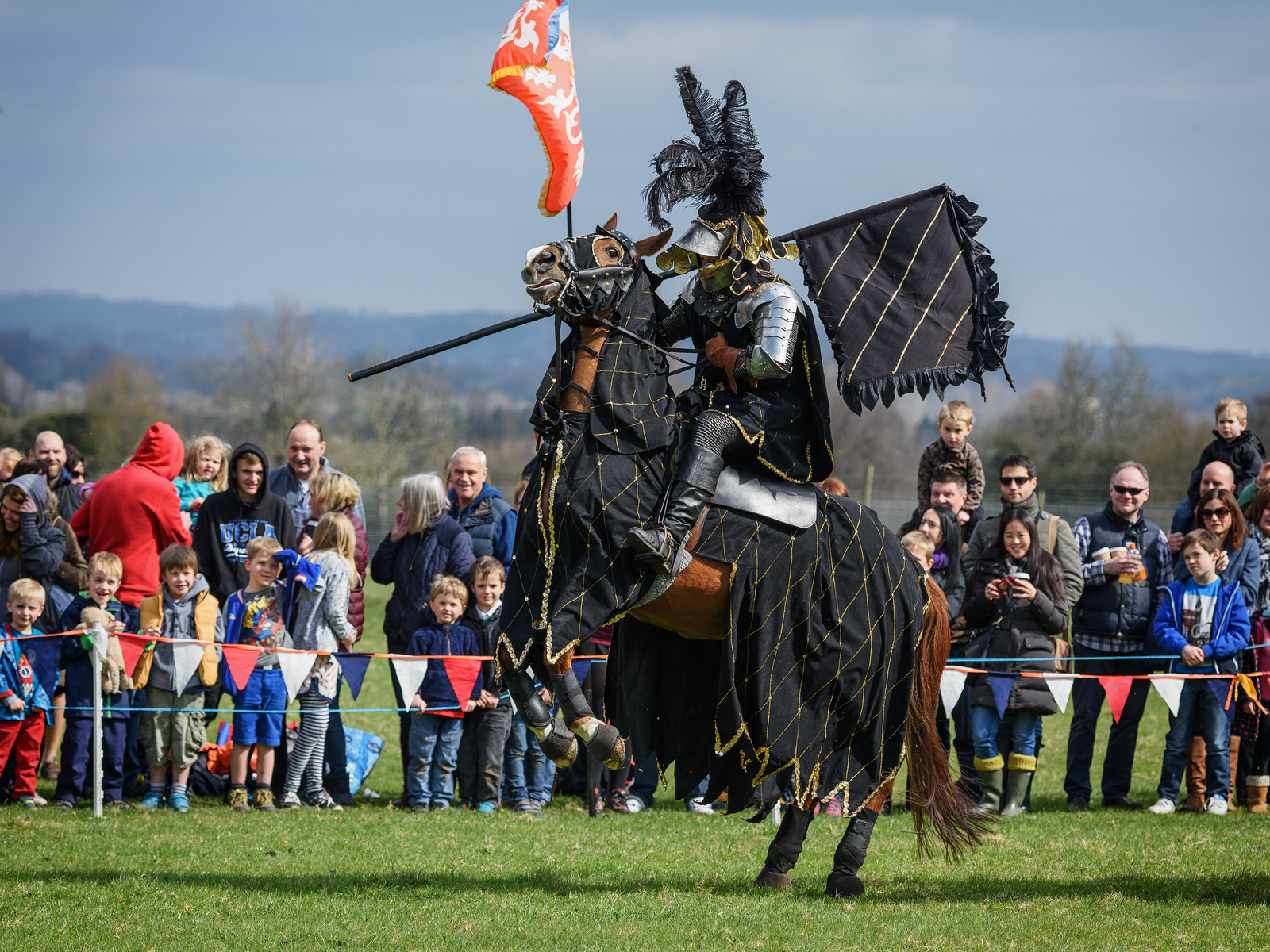 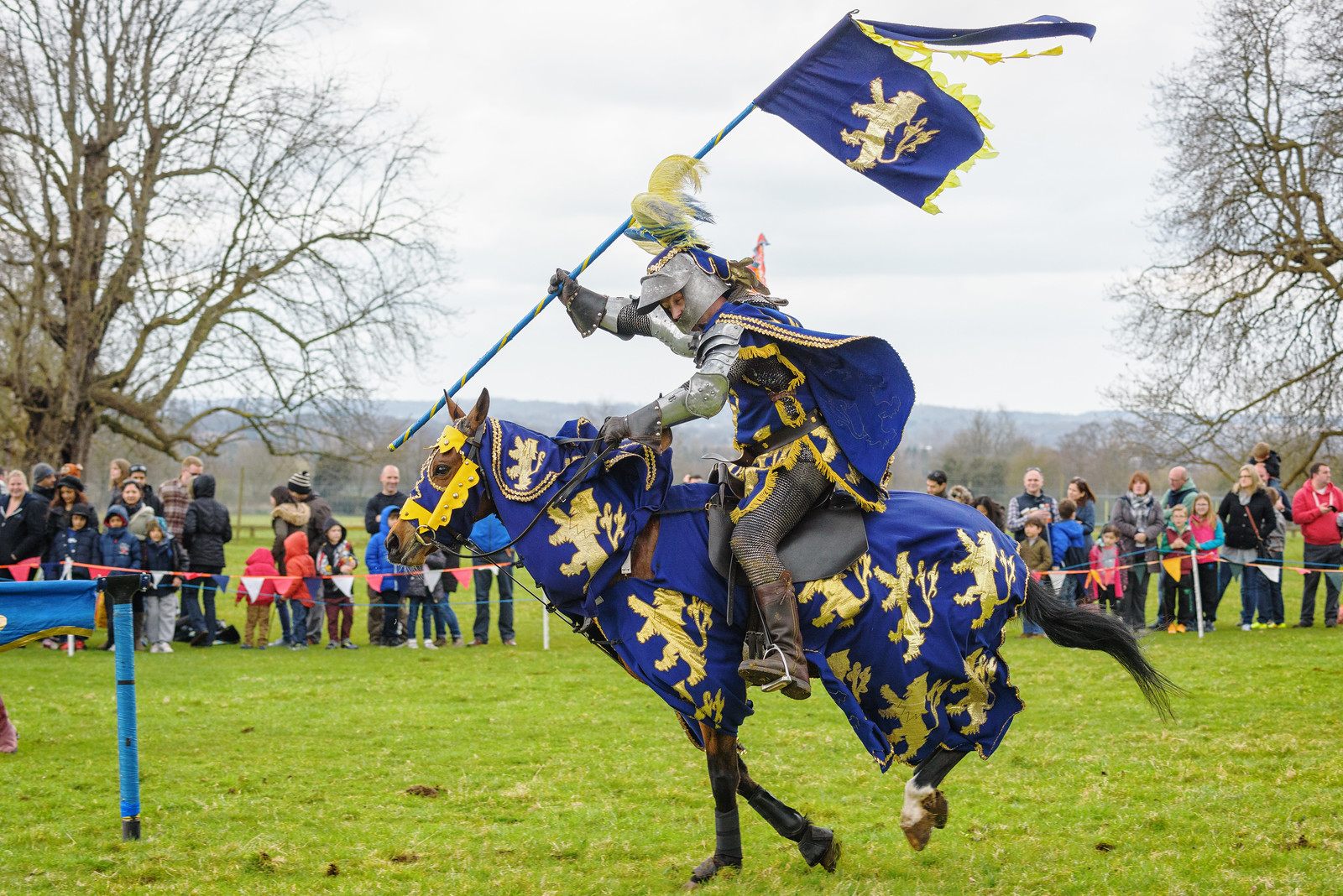 The queues of cars outside delayed entry for 20 minutes, but one of the reasons this estate has played host to many concerts is the enormous space near the house, which in this case was serving as the car park. Once inside, we hurried over to the parade ring and watched the event from the back of the crowd. Unfortunately this meant I have many shots of people’s noses, armpits, arms and the tops of their heads, rather than the jousting display. 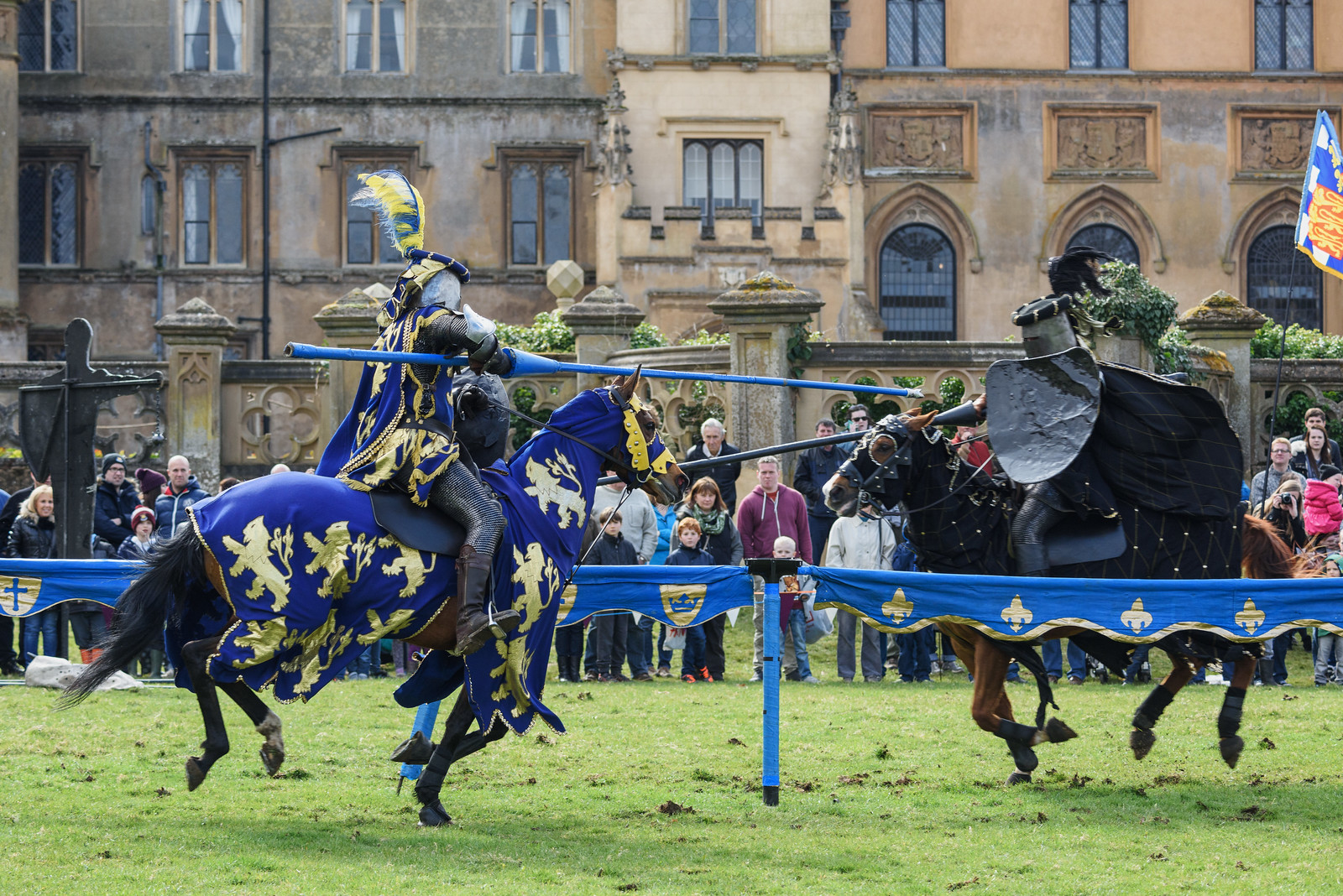 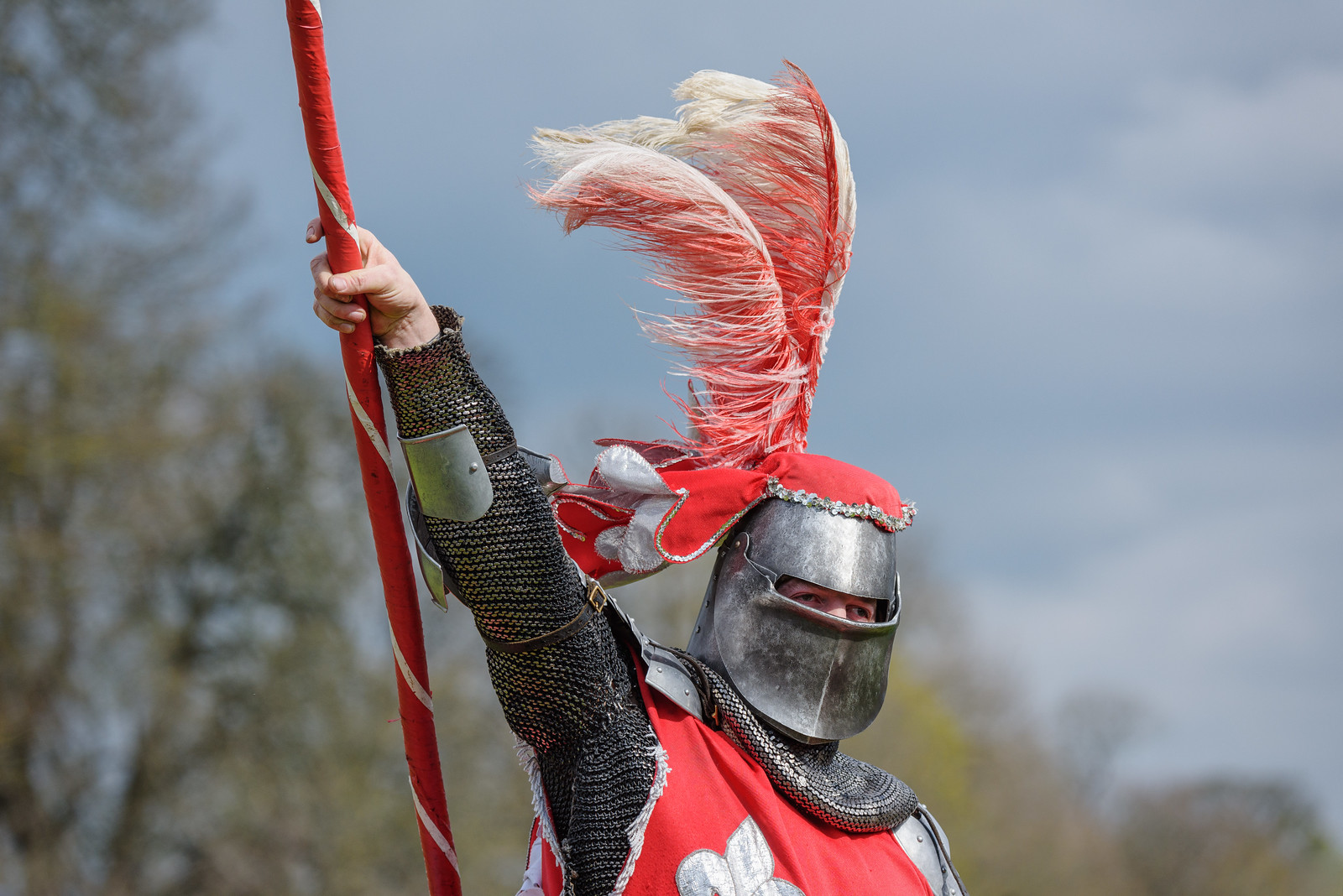 The display itself was spectacular however and was provided by the Knights of Arkley, a professional jousting display team from Llanelli in Wales. The display included swordplay, which included a chance for some surprisingly savage participants including children to take part in a sword fight with a squire, use of morning stars and cudgels, and of course jousting. Despite the fact it’s a display team and the outcome is predetermined, it’s great fun to watch and both the wider crowd and children were very excited to watch it. Sadly there was a little pushing and shoving in the crowd and our son had his view blocked by some children who turned up after we got there. What was really nice was that their mother noticed and moved them out of the way. I have to say that displays of courtesy like that cheer me more than a mere momentary apology or thank you (because politeness and courtesy are not completely dead). 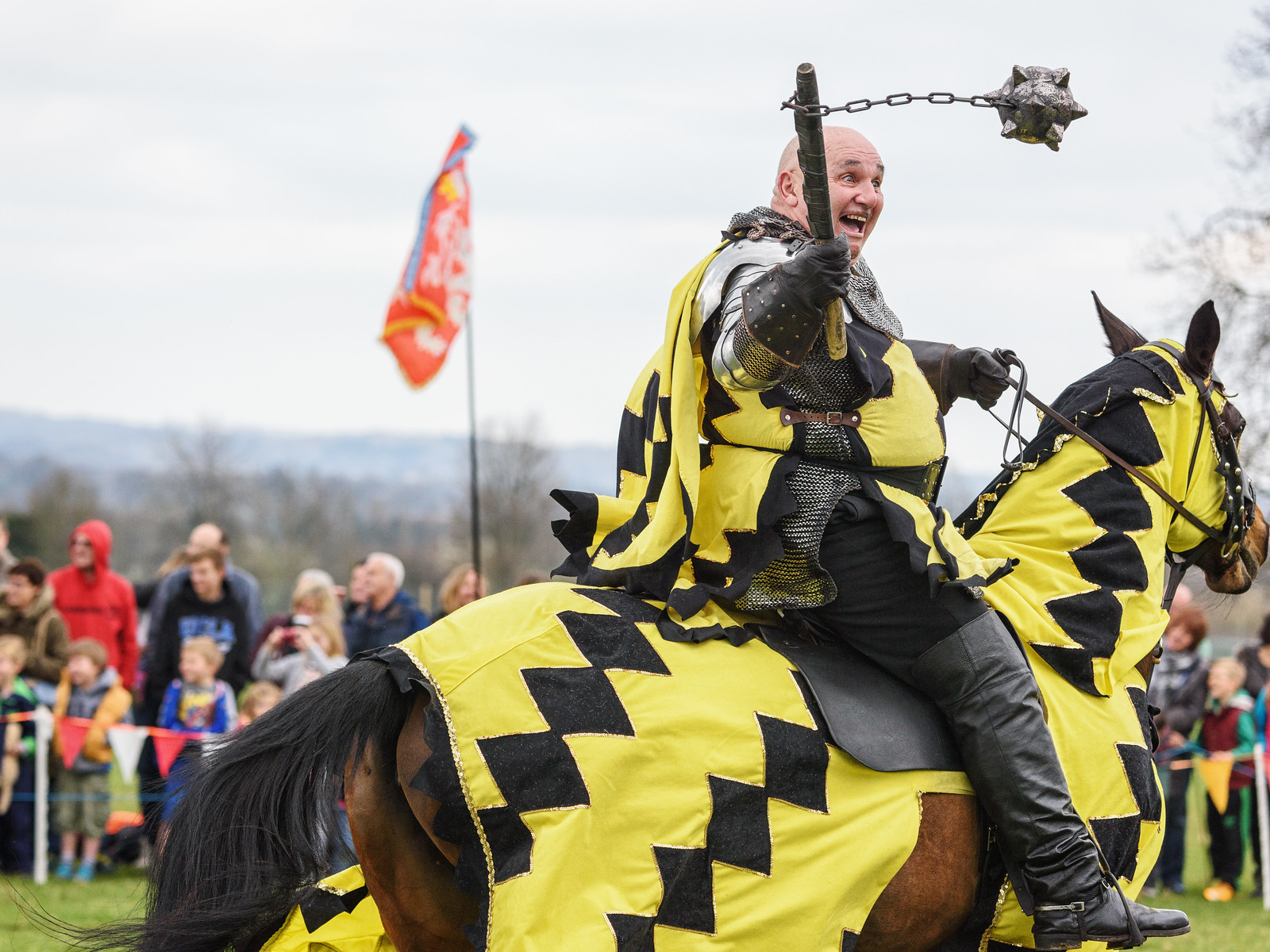 Finally the display finished and a fruitless quest to the restaurant was rewarded only by the view of an impressively sized queue. Shortly afterward it was realised the only option was a burger van which sold 58% meat burgers (mmm, nostril) and we settled down to eat what food we had next to the parade ring to watch the second display. In the meantime my son got into the spirit of things during a display of swordplay to the crowd. He shared this gem with us while the “squires” were requesting volunteers from the crowd:

Son: that knight, he wants you to [muffled]

Me: speak up son, I can’t hear you

Son: [loudly] That knight, he wants you to come inside the ballerina.

Me: You mean the arena son [smiling at him and everyone around us in the crowd]

Me: [decides to leave it there and changes the subject] 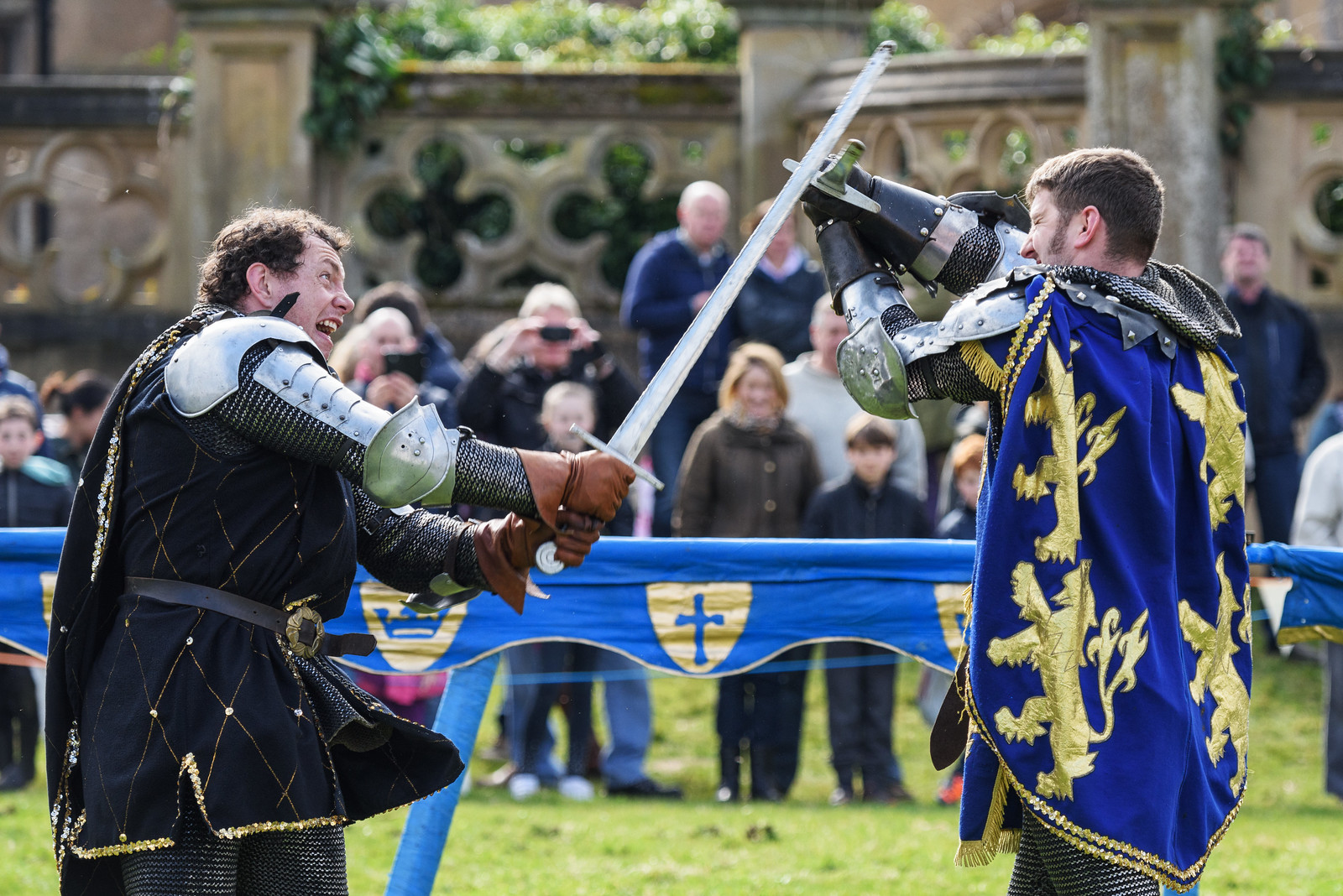 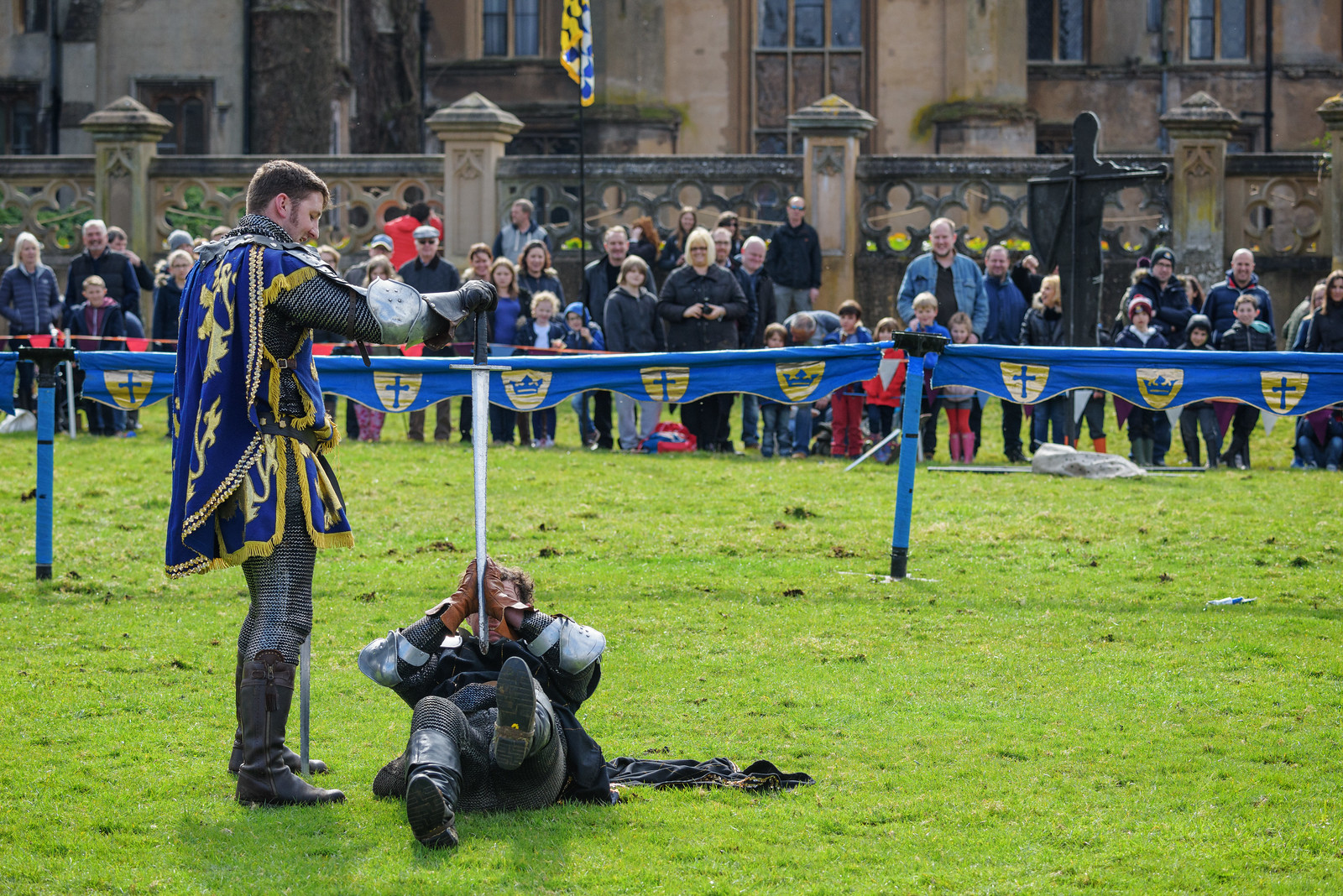 For the second and final display, we were at the front (having taken the step of sitting down next to the parade ring to eat lunch). This afforded a fantastic view and now the only battle I had was which lens to use and to stop our son from wandering off before the event started. I wish I had used my 35mm lens more – some of the shots of the Knights riding past are spectacular because of the backgrounds. 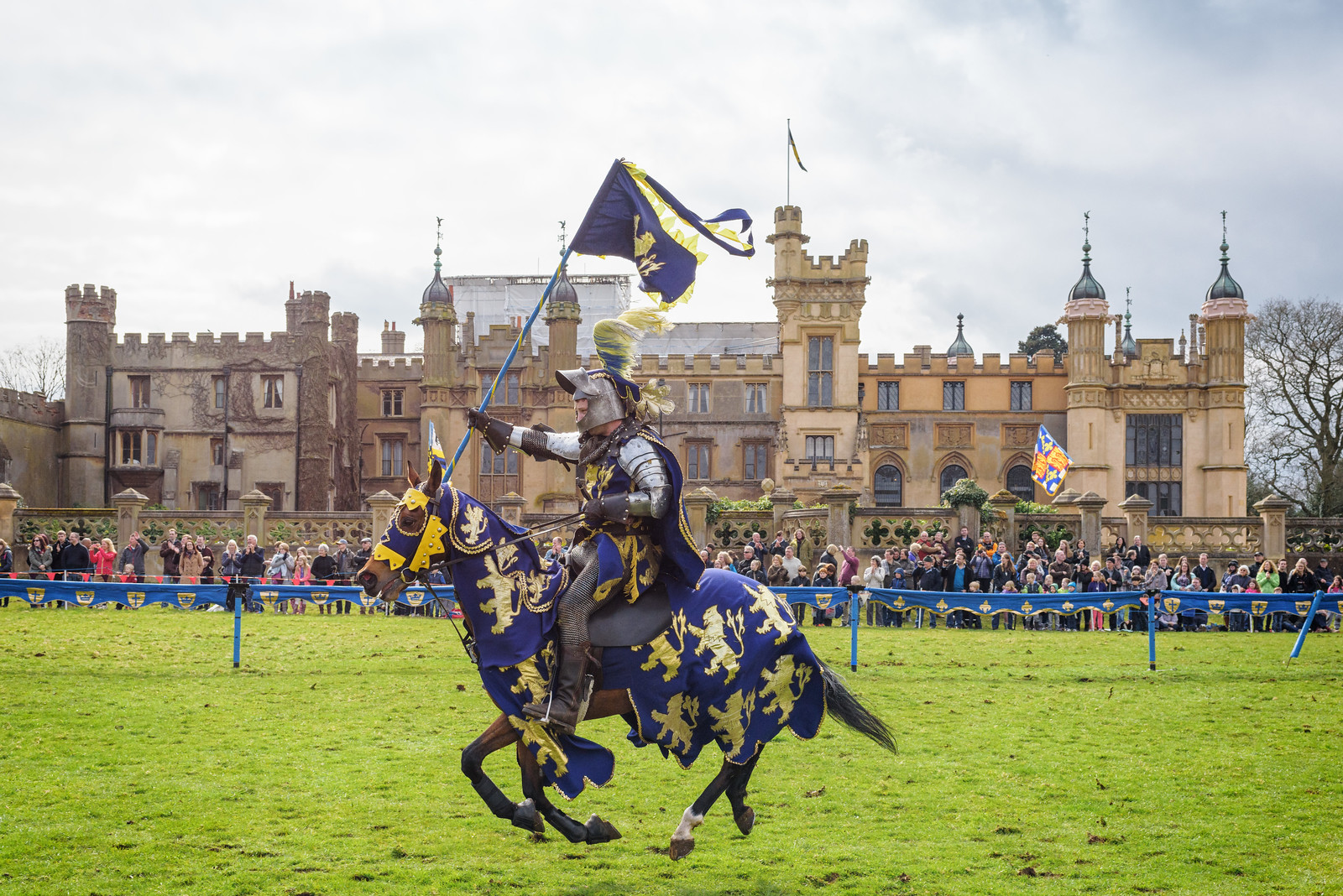 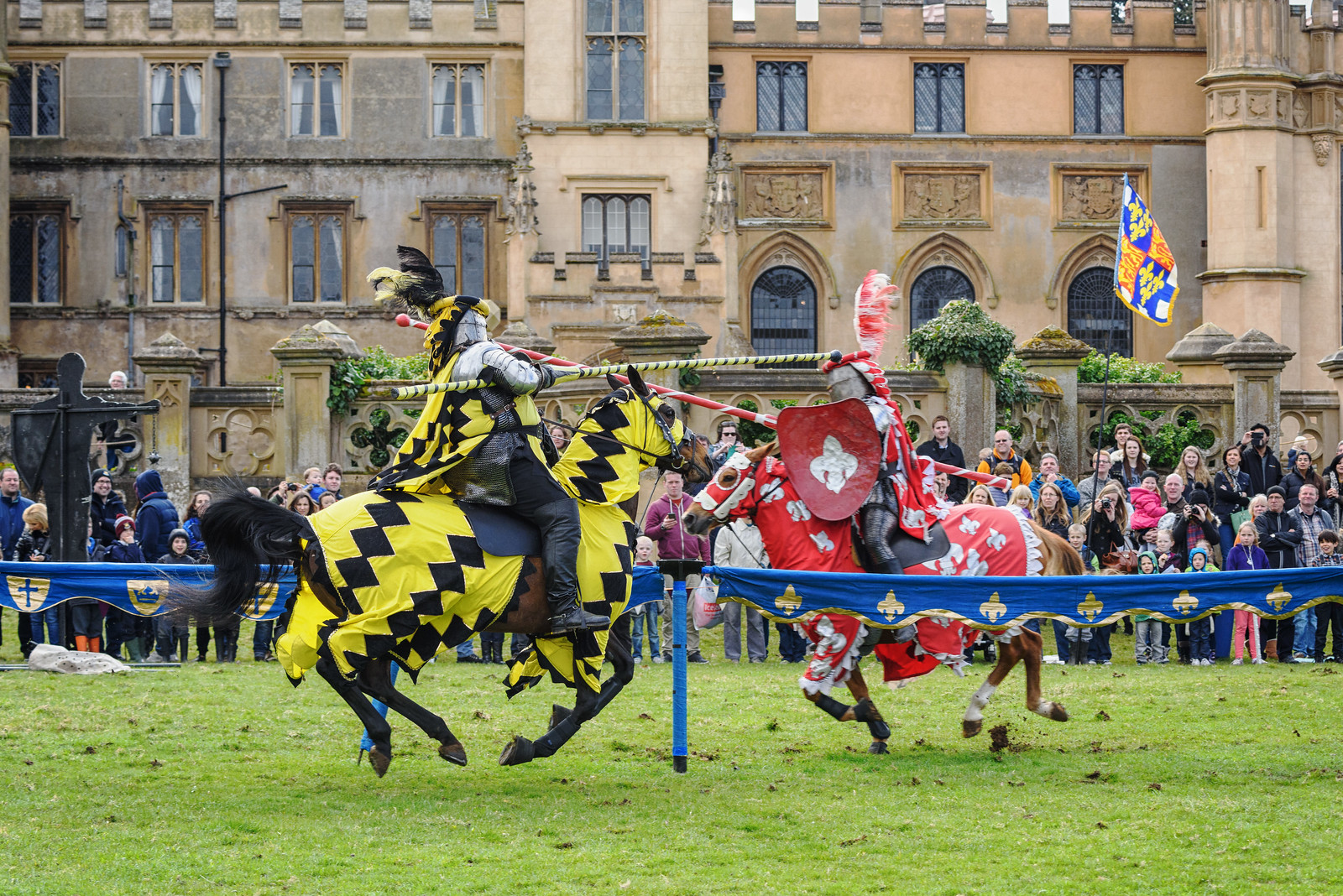 My Nikon 80-400mm G lens (new version) did sterling duty during the display. No, it cannot achieve the resolution of a prime and if I don’t have to haul it around all day I might take my 150-600 Tamron for extra reach, but it’s of a size with my 70-200 f2.8 VR II which means it fits neatly into a shoulder bag with a couple of other lenses. It also focuses faster than the Tamron, which was essential for the action shots. I did wonder if I should have taken the D750, for its flip out screen and faster frame rate, but the D810 produced results that were sharp enough and that managed to capture the action. An added bonus of the D810 is its extreme croppability and that proved handy once again for these shots. 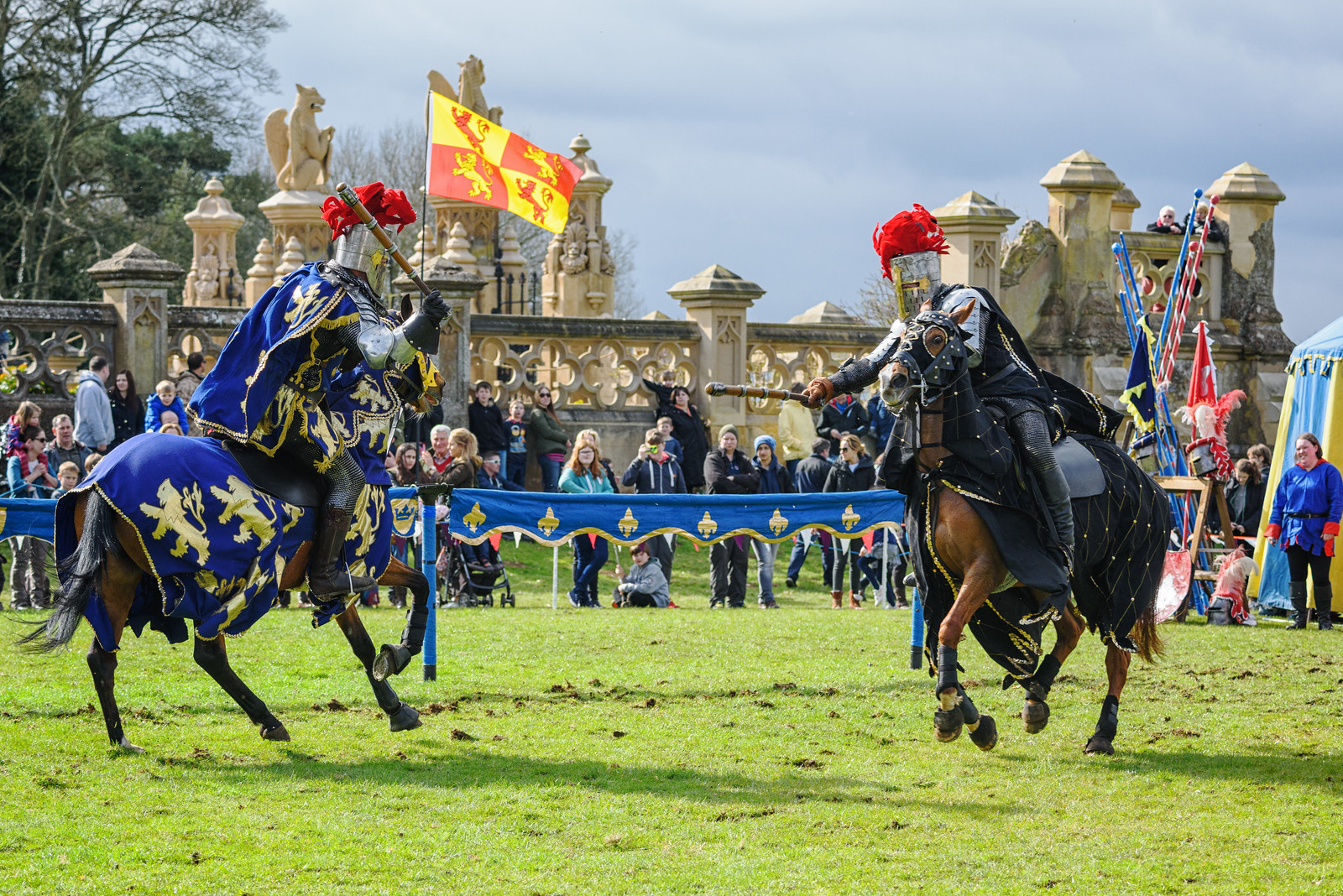 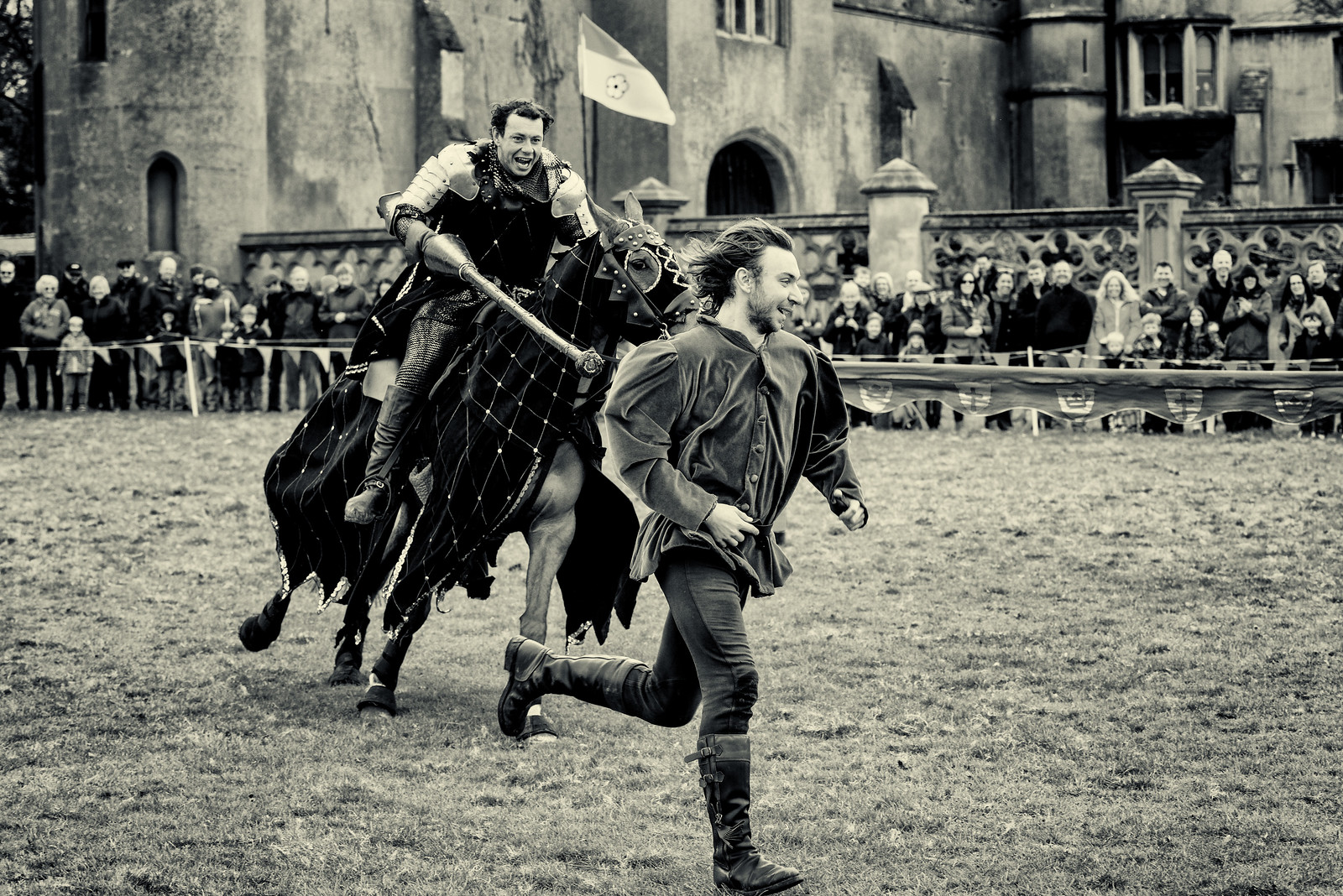 The display itself was exciting and well played for laughs by the “Black Knight”. My son throughly enjoyed watching it and aside from occasional demands for food or embarrassing statements was (mostly) quiet throughout. All in all a great day out! 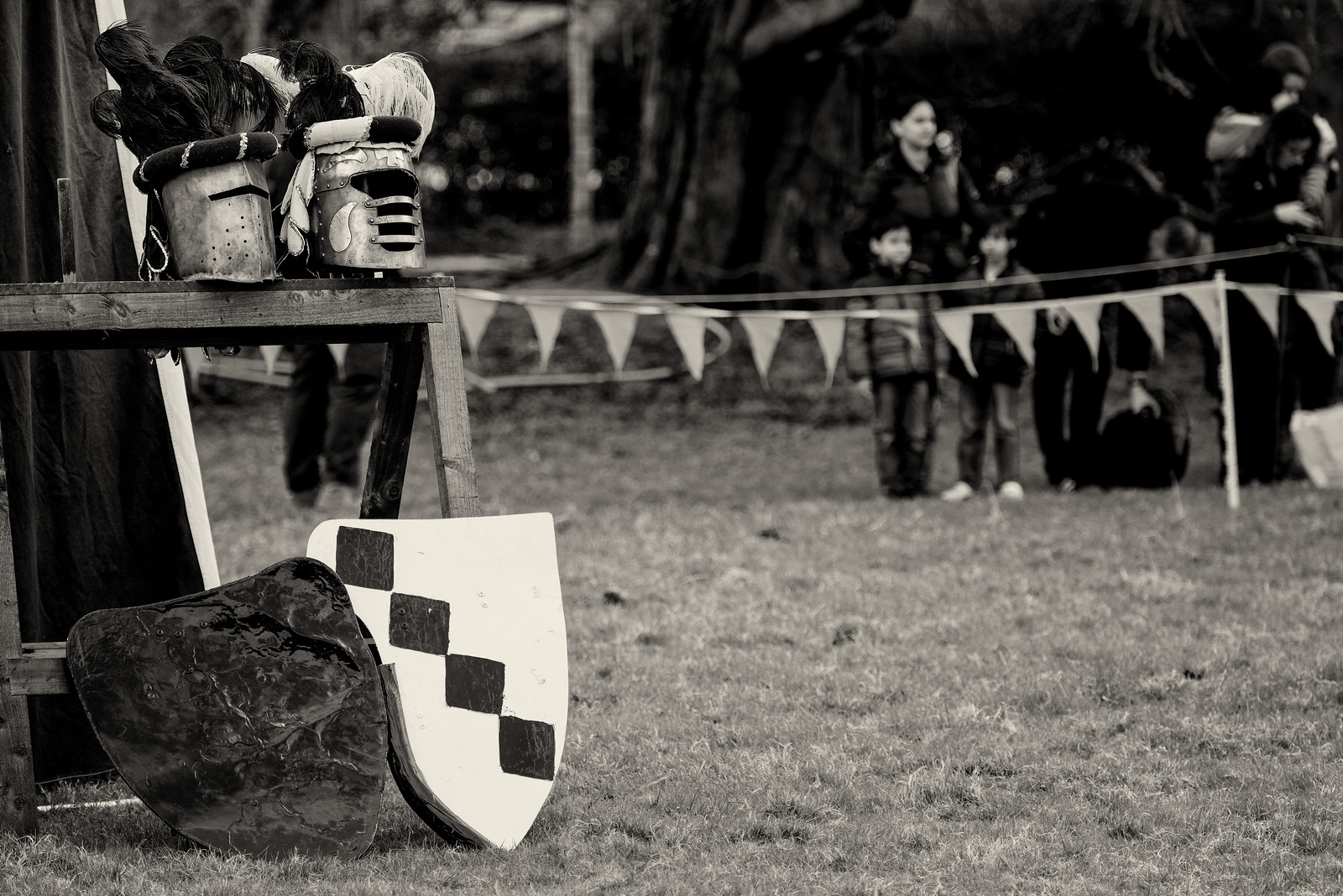