I was lucky enough to spend last week in sunny (at least last week) Dorset, in Studland on the Isle (though not an Island, “just” a penisula) of Purbeck. It’s a very beautiful location, particularly in great weather. I’ve always enjoyed visiting, partly because of family holidays in the area but also because of a field trip I made to Swanage when in junior school.

While in the area I like to think there are some things which are just a given, if they are open. The Swanage Railway is one of those, if you happen to like steam trains or just have a small child who might. The Amazing views from the coastal Path at Durlston Country path are also worth a look. Corfe Castle is just magnificent, oddly enough more so when viewed from the distance later at night or earlier in the morning – if I worked nearby I suspect I would drive past everyday on the way too and from work just to look! Abbotsbury Swannery is much more spectacular than you would think. Lulworth Cove and Durdle Door are spectacular whether you are someone who likes scenery, enjoys learning about geology or simply a 2 year old who has become convinced Durdle Door is actually a Dragon… Leaving all of those to one side the coast itself and the beaches are great fun.

The Swanage Railway is always an enjoyable experience, even if all we did this time around was to ride to Swanage on the train and then ride straight back again. Last time we stayed in Dorset (back in 2010) we stayed very close to the railway so you could watch the steam trains sail by all day, it was an amazing experience.

Durlston is somewhere I recall from visiting when I was in junior school, particularly the huge globe with the geography of the late 19th century/early 20th century imperial period. The views of the coast and the Anvil Point Lighthouse are spectacular. 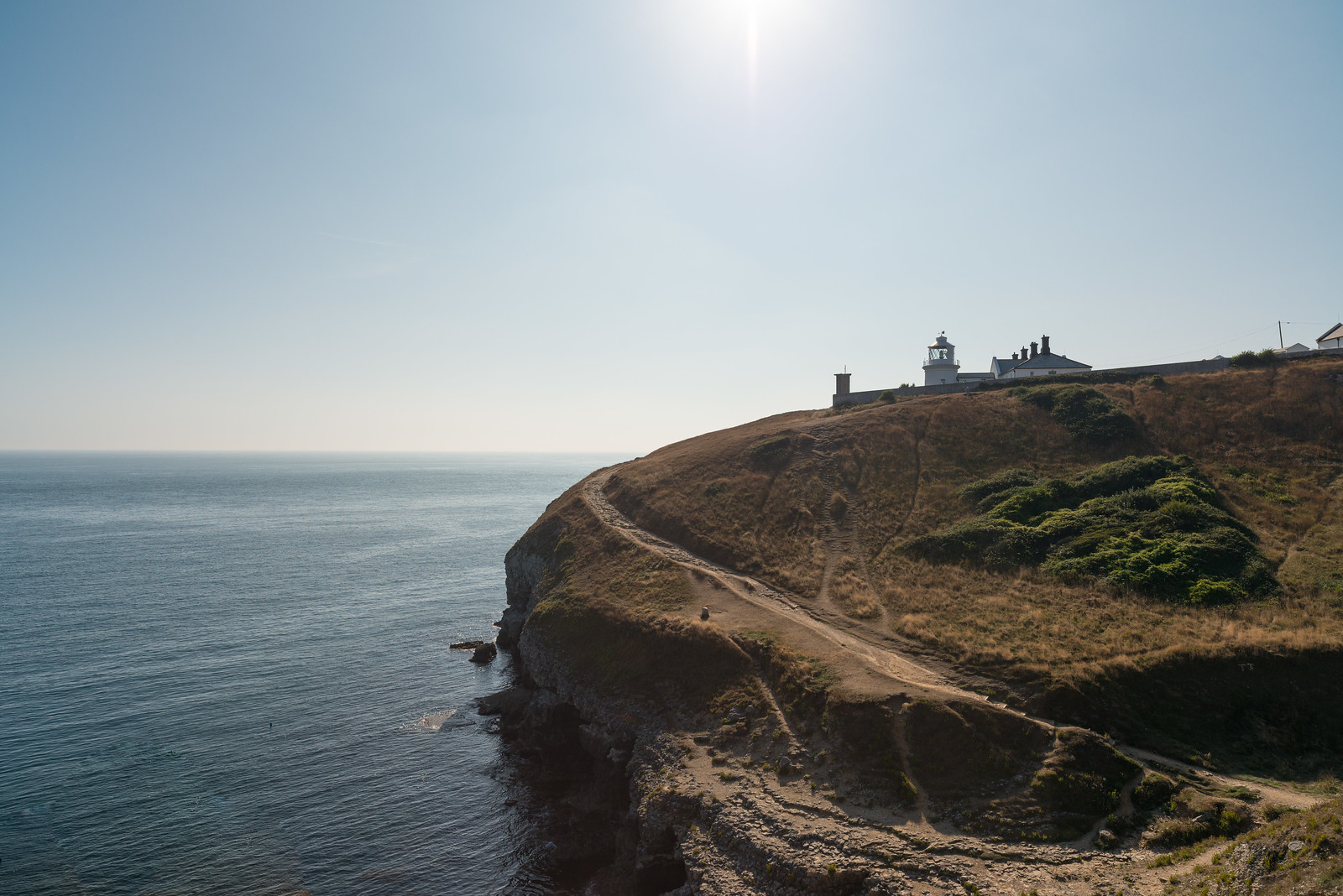 Durdle Door was unfortunately a nightmare to visit, partly because our son hadn’t had enough sleep, and partly because the steps leading to the beach hadn’t been repaired this year due to a dispute between the Lulworth Estate and Natural England. I can only say that this is a real bummer and I hope it gets fixed for next year because carrying lots of stuff and our son down and up a steep rocky path wasn’t much fun at all.

Lulworth Cove was beautiful in its own right, but particularly because of the exposed sedimentary rock formations. Puts me right back to school studying Geology in sixth form. Our son also had a lot more fun because he managed to sleep for an hour!

Corfe Castle was fun for all the usual reasons that exploring a ruined castle was fun. However there were people who were re-enacting medieval life which we and our son found interesting, particularly the knights in armour.

The beaches of Studland were just great and I could happily spend all week there but for the swarms of angry wasps (in fairness, this isn’t a Dorset thing – wasps seemed to have been out in force this summer for some reason!) that descended as soon as any ice cream or lolly or other food was produced.

To spend a little time on the photography for a second, both the D800E and D600 did sterling work, but for some reason I gravitate more towards the image quality from the D600. Sometimes the results from the D800E can be a little flat, I’m not sure why. I did come to the conclusion that I need a UWA solution that’s small. Happily I think the Voigtlander 20mm F3.5 is part of that – it won’t win competitions for sharpness but the results are sharp and contrasty enough for my purposes.

Another part is my recently arrived 18-35mm G lens, more on that in a future post. The 50mm F1.2 AI-S is undoubtly my favourite lens by far for my Nikons, the results at any aperture are amazing.

I surprised myself by picking up the E-P5 I had mainly bought to get the lack 17mm lens that came with it and really enjoying using it. Some of the shots with the E-P5 were amongst my favourite from the trip. More on the E-P5 later.

All too soon it was over and this week I’m back in the office in London. Nevertheless, there will always be a soft spot in our hearts for Dorset and the Isle of Purbeck in particular.