I’ve not been posting for a while, mostly because I’ve been on holiday and away on and off the last few weeks. We headed back to Cornwall for a week away in April and as ever it was welcome. This time we stayed in the lovely village of Pentewan, nr to St Austell and just down the cost from Mevagissey. 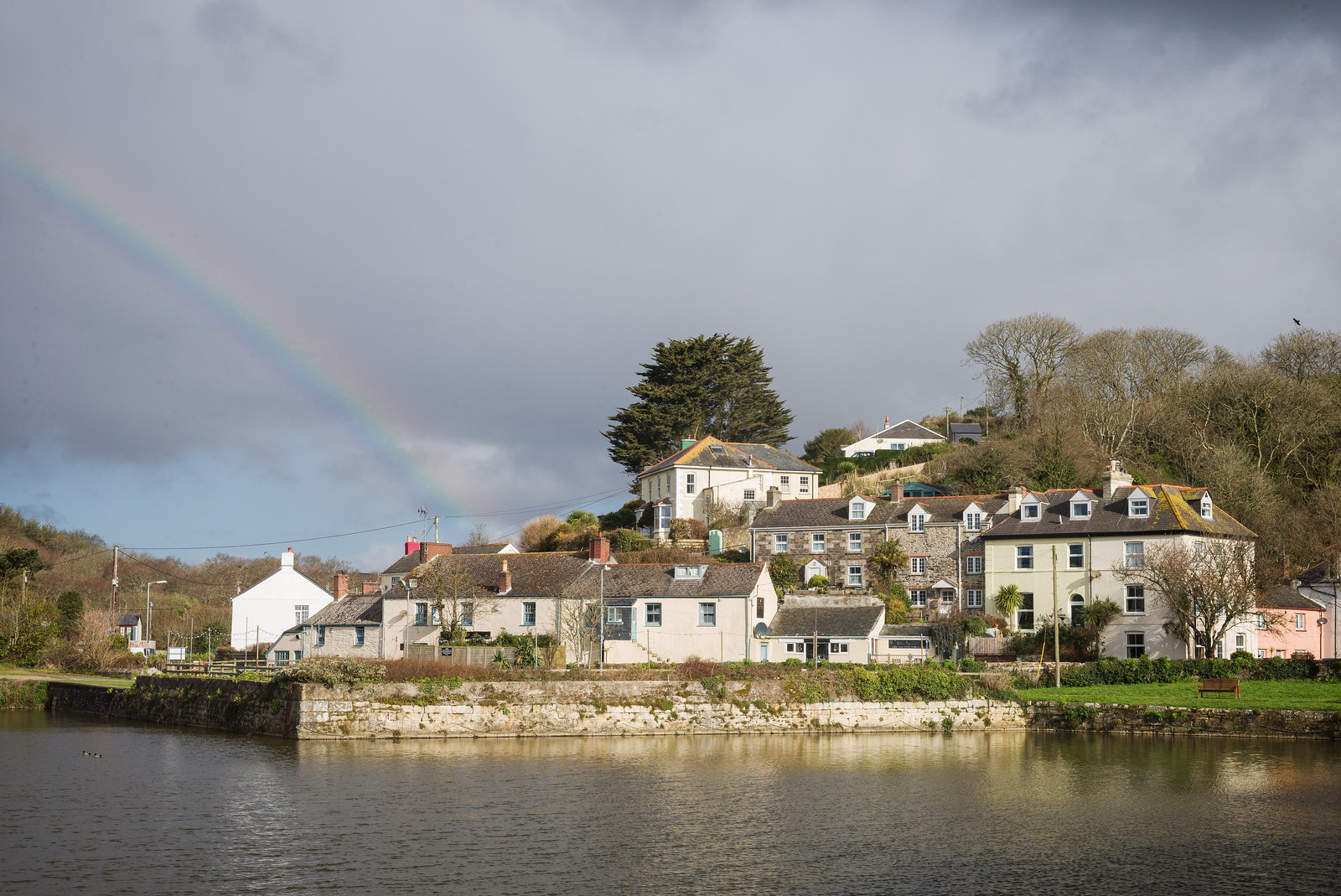 This was partly because of the terrifying drive over the hill out of Mevagissey and my other half’s desire not to have to do that drive each day. I almost fell off my chair laughing (or I would have done had I not been strapped in) as she drove us in to Pentewan down a single track road with a 30% gradient. In fairness, there is a less terrifying way into Pentewan that doesn’t involved a 4 mile detour, but it’s sometimes hard to believe the sat-nav isn’t having fun with you. 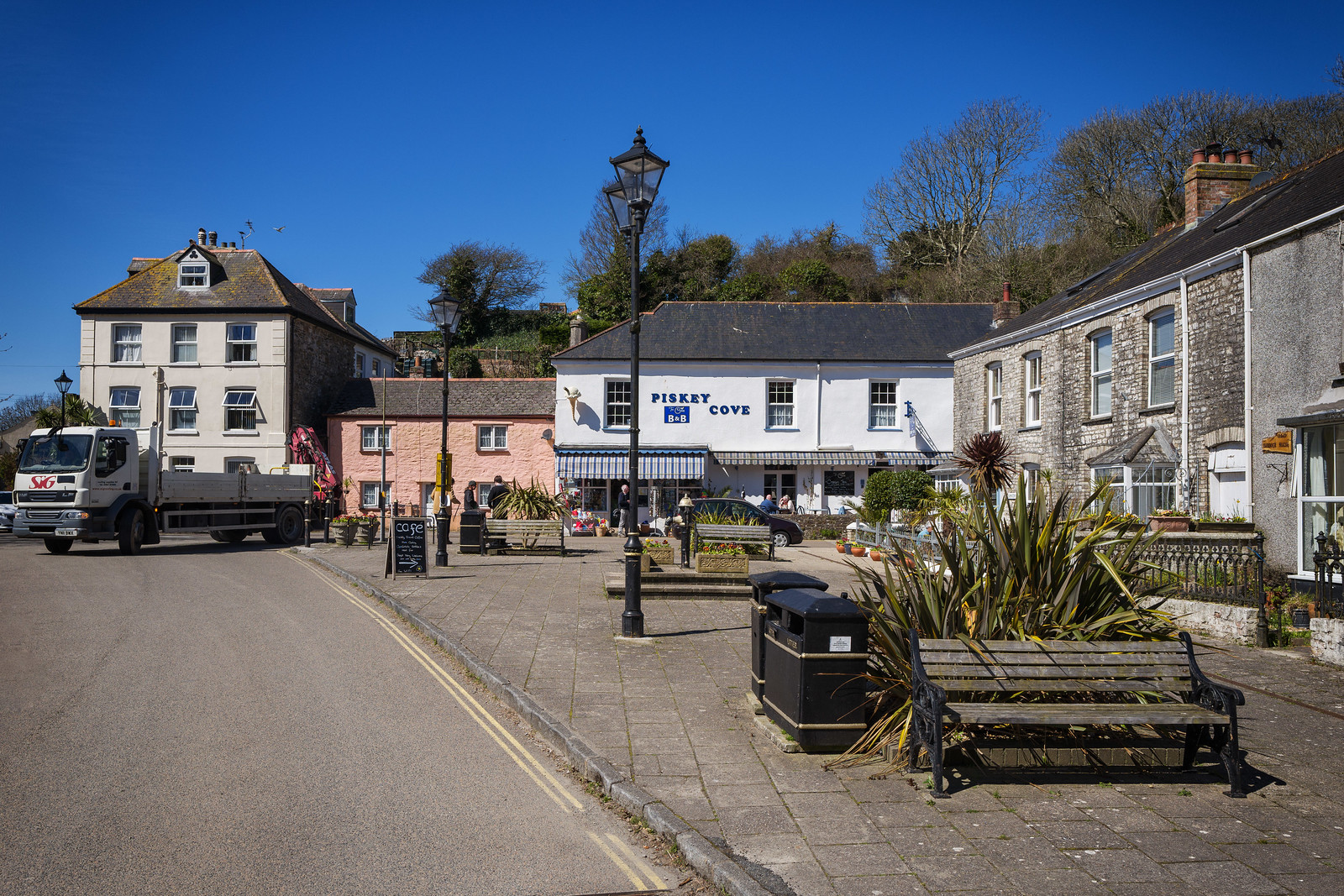 Pentewan is a former port used for the export of China clay, the harbour of which silted up in the 40s and 50s. The harbour itself still exists in the middle of the village, but is cut off from the sea. There’s a huge holiday park next to the village for those wanting to caravan or camp. The village itself sits in a horseshoe shaped valley, with houses terraced up in levels from the bottom and centre of the village. It’s very beautiful, but very compressed at the same time. 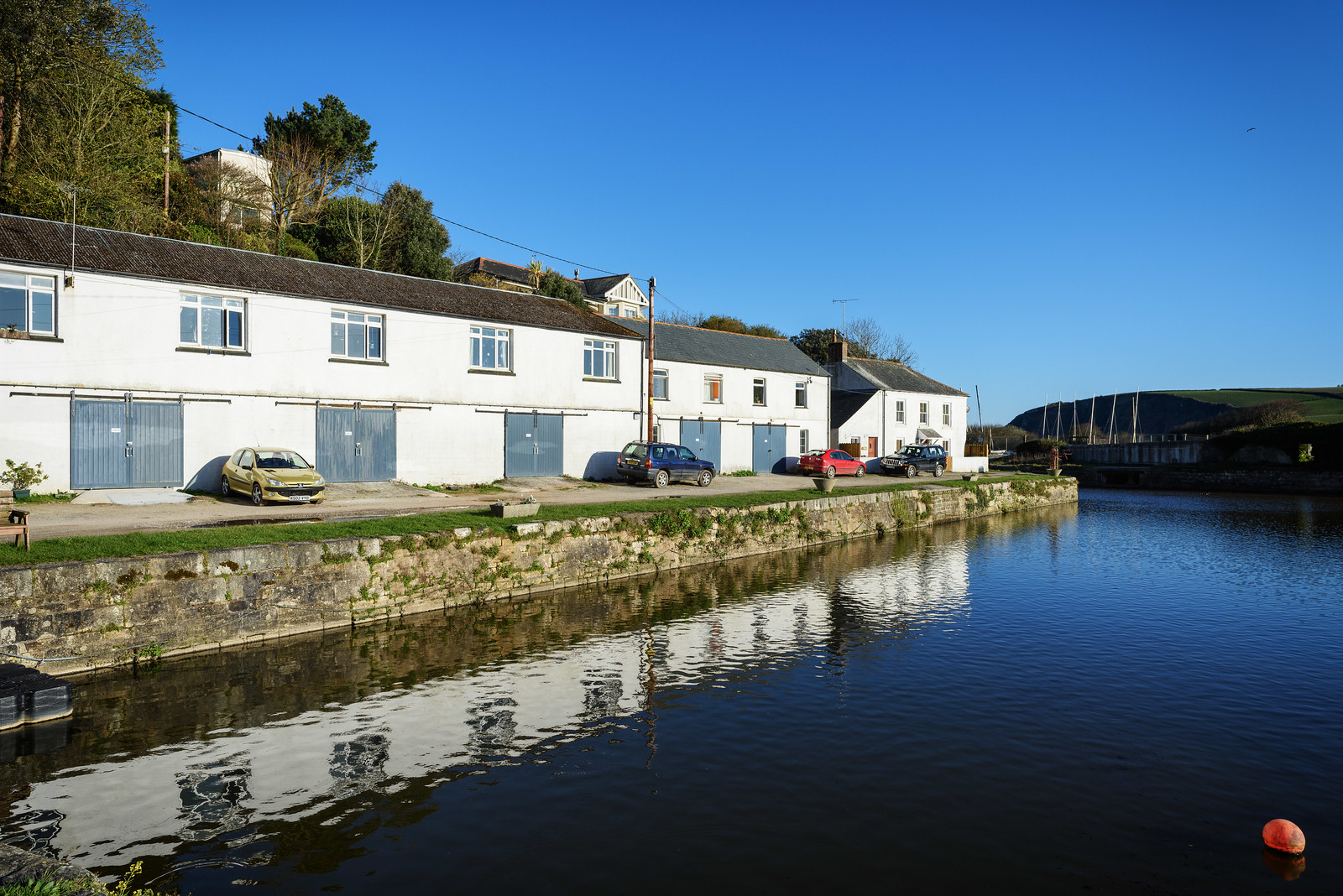 Parking is a problem in the village and I confess I would think twice about staying in the height of summer. There was parking at the cottage we rented, but the way people parked made it very hard to consider parking there, which meant we ended up taking space in one of the village car parks. An episode a few years ago where I managed (somehow) to end up crashing our car on the first day of a holiday to the Lake District has put me off dodgy parking! 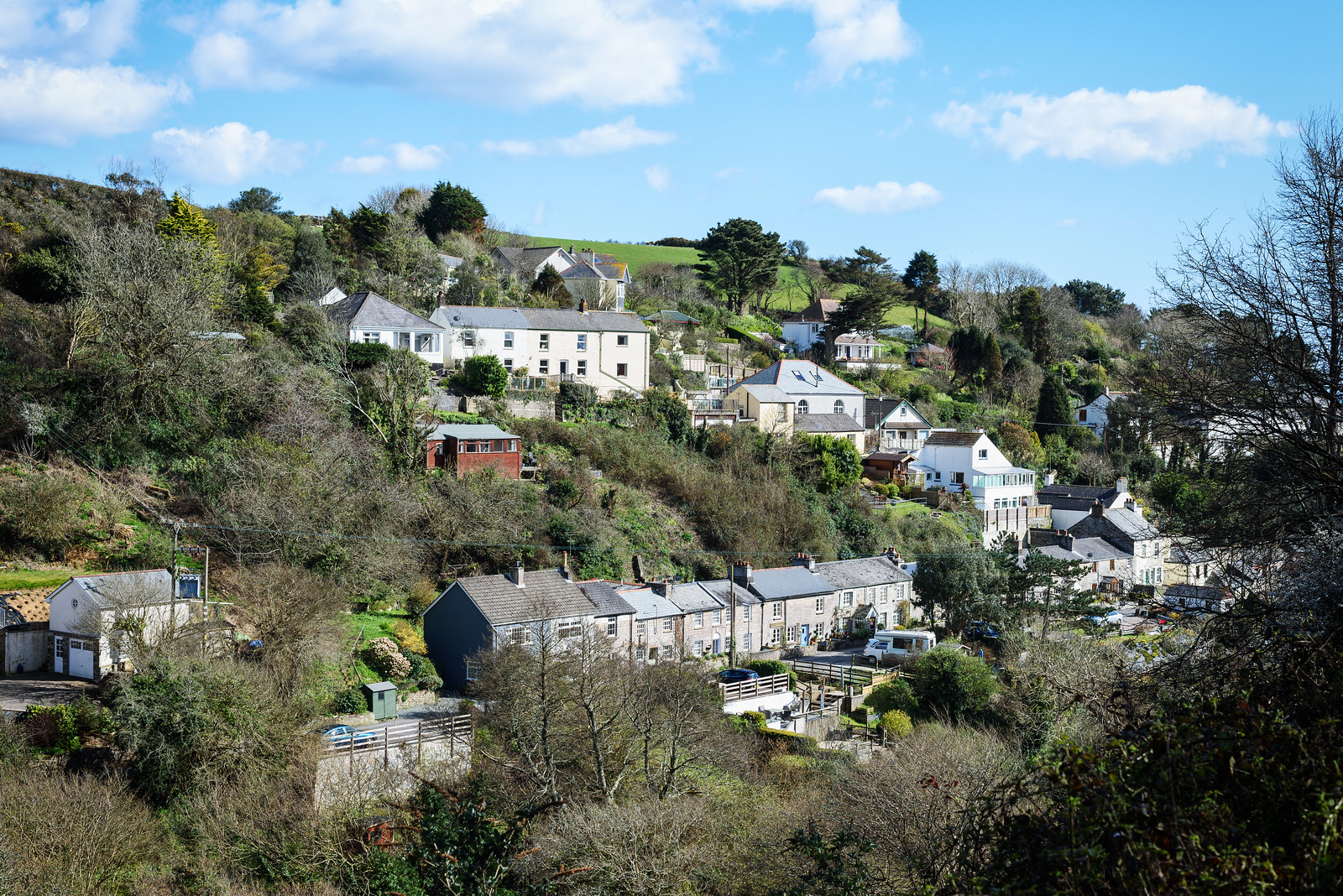 The beach at Pentewan is lovely, but it’s worth noting the side by the holiday park is better than the side close to the village. Both are fantastic for flying kites when the wind gets up. The holiday park also has a very, very cool playground right on the beach that our son absolutely adored. 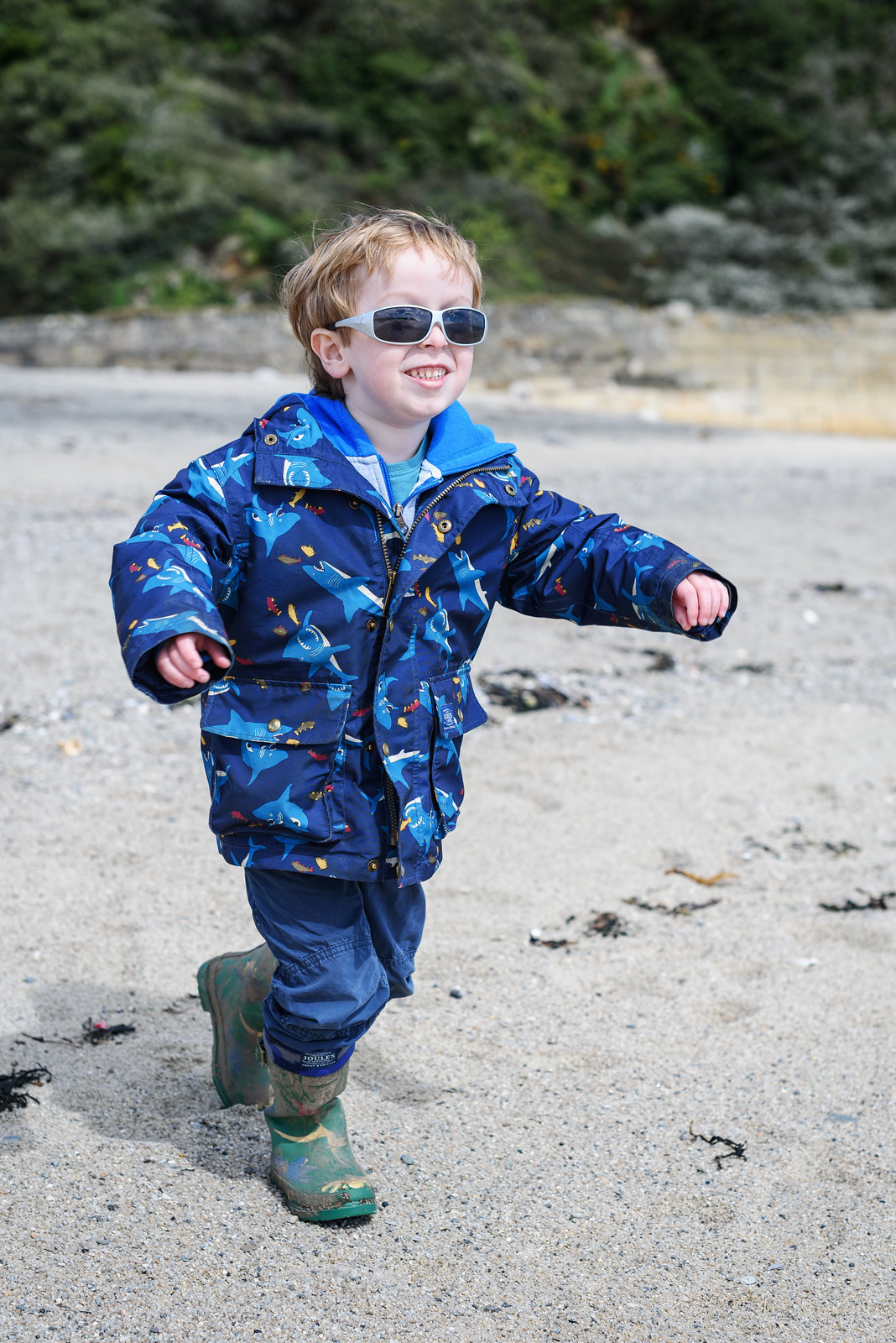 If you look closely on the way down to the beach, you can see evidence of how industrial the village previously was, with railway tracks running almost to the edge of the beach. Walking out of the village by either of the two walks on the village website provides amazing views. 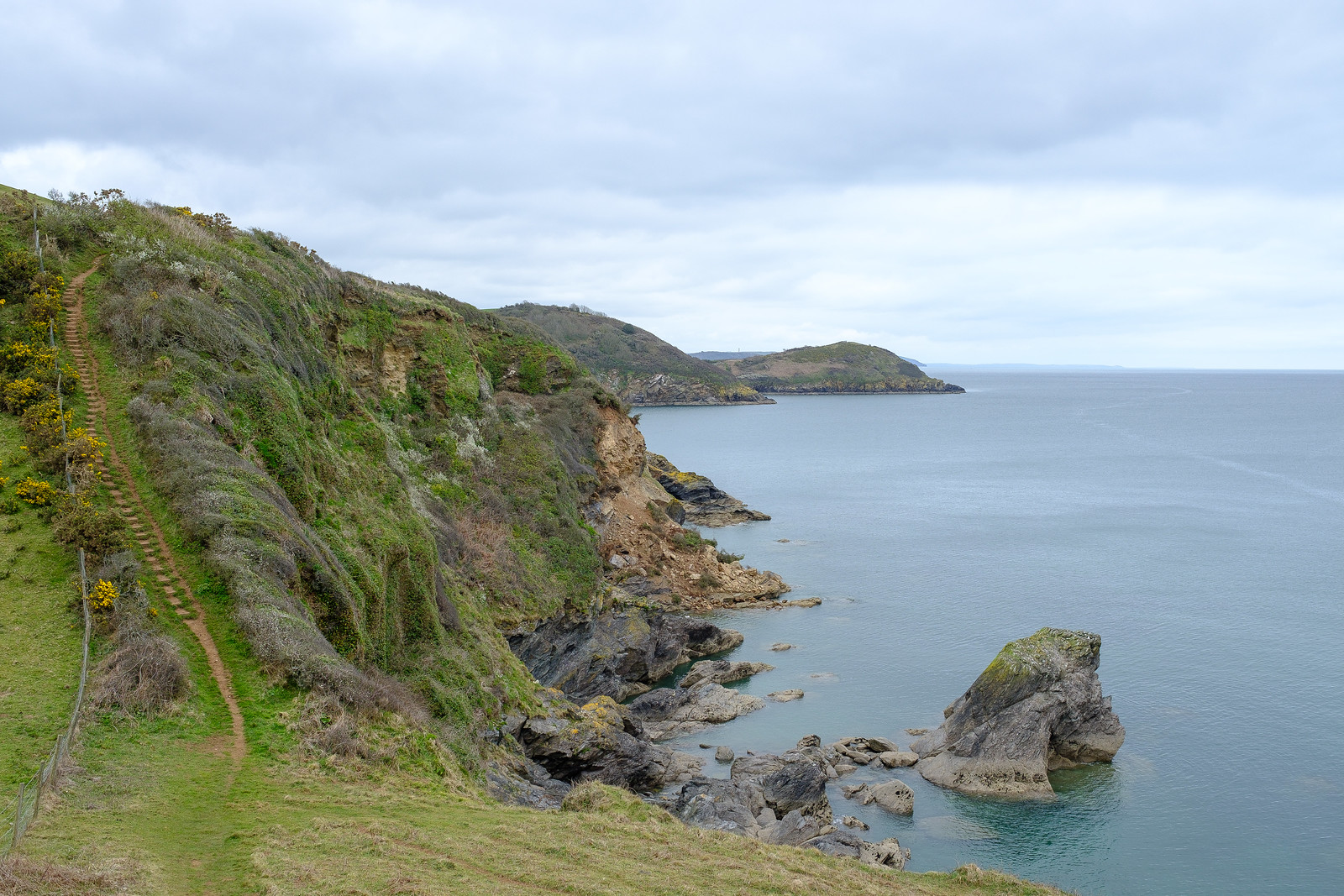 We also faced a (small) house invasion, from a somewhat pushy tabby cat. The only way we found to remove it from the house we rented was to put some poached salmon outside the front door! 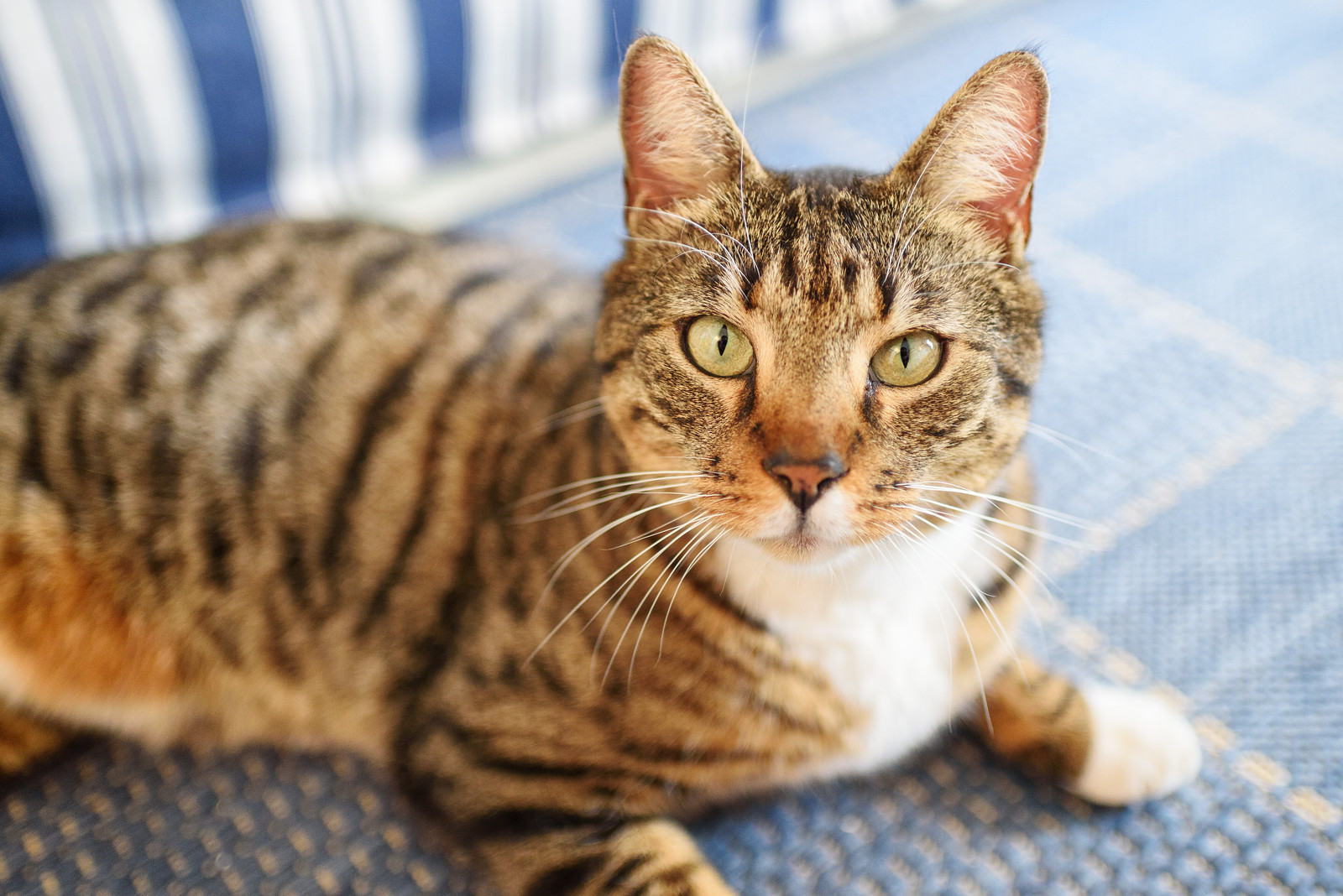 As ever, our son was keen to visit the Eden project, which provided ample opportunities to run around everywhere and explore. Lots of people seem to think the Eden project is rubbish because it’s environmentally conscious. All I can say is that I don’t agree with every single statement or example peppered around the site, but I do agree with the general theme of sustainability. 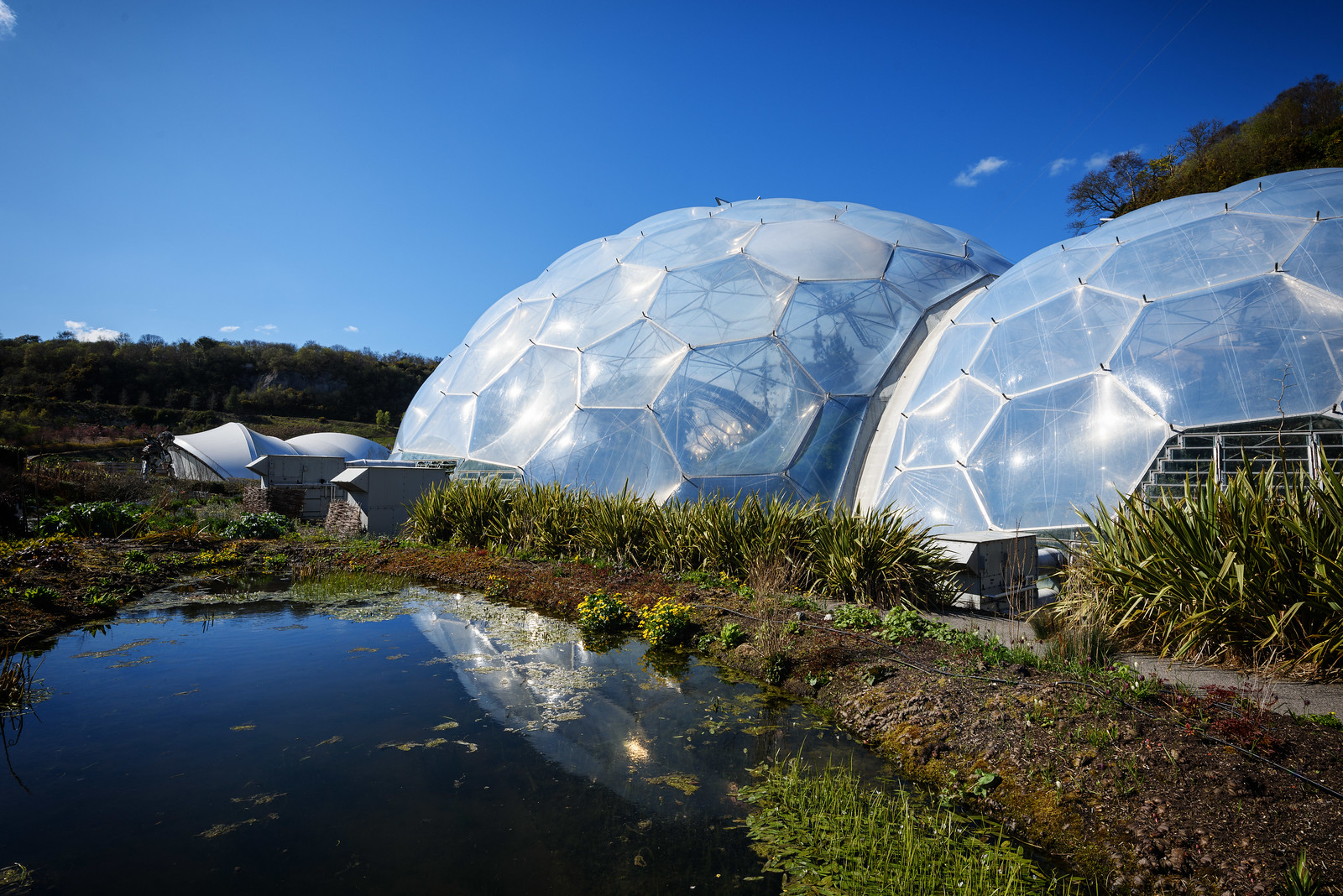 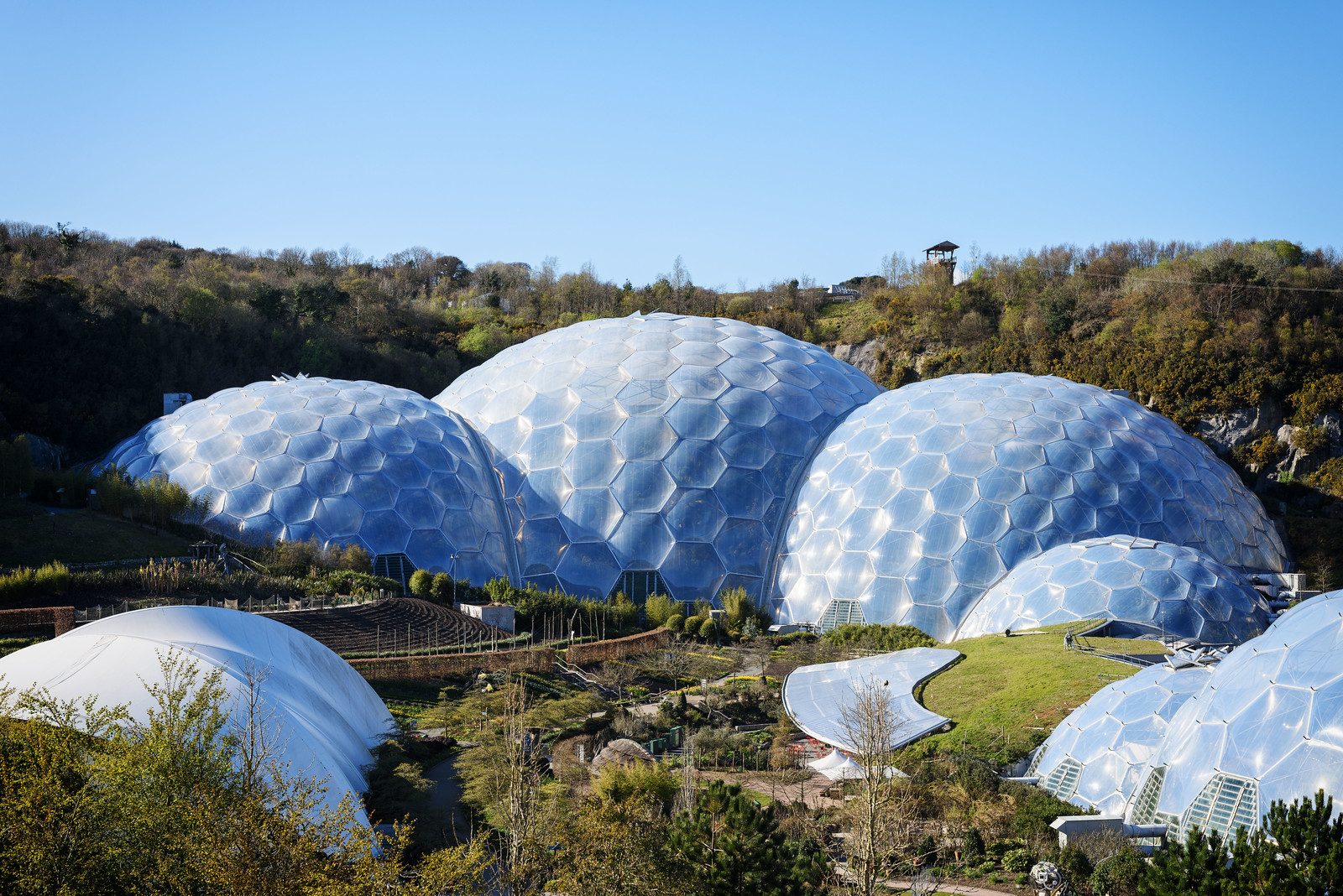 I also think the Biomes are simply fantastic in their own right. The rainforest biome is exhausting but amazing and getting to see it from the “lookout” platform was simply brilliant. 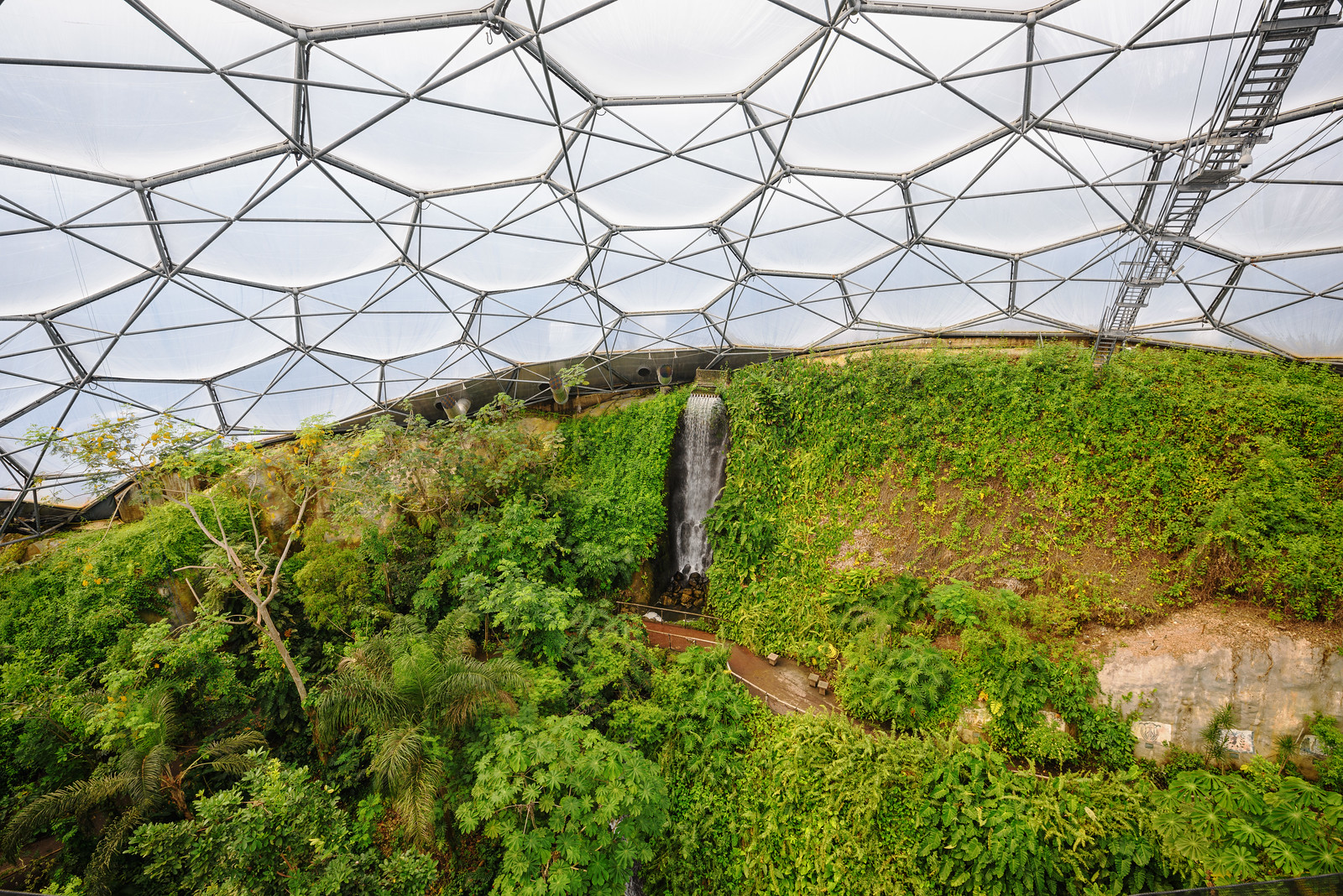 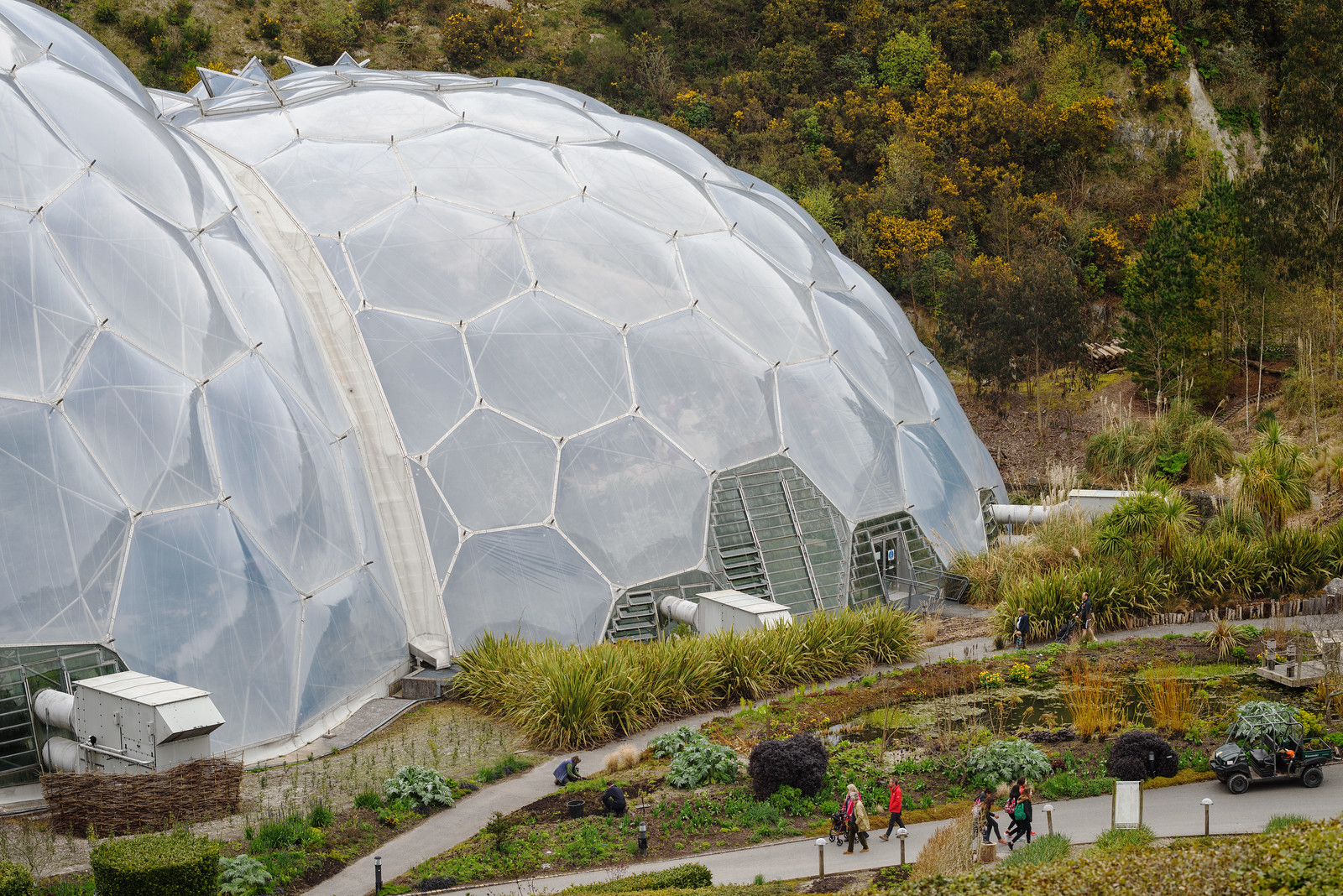 Lastly, our son just loves the place, he runs around like a mad thing and I do think that elements of the message that the natural world is precious and shouldn’t be taken for granted do permeate his consciousness. 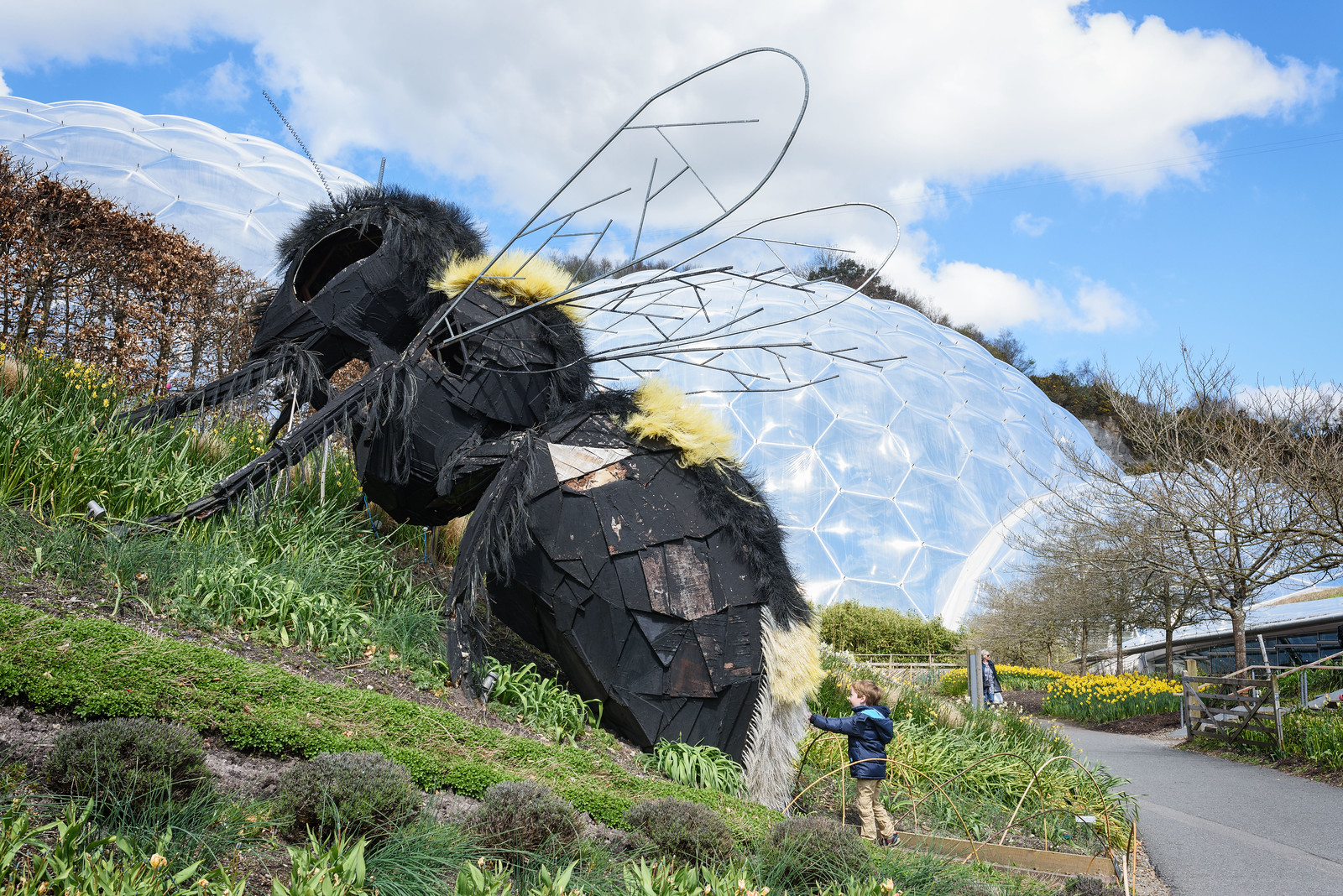 The restaurant has also started offering delicious Burritos, which is good because the walk around the terraces builds up a fierce appetite. 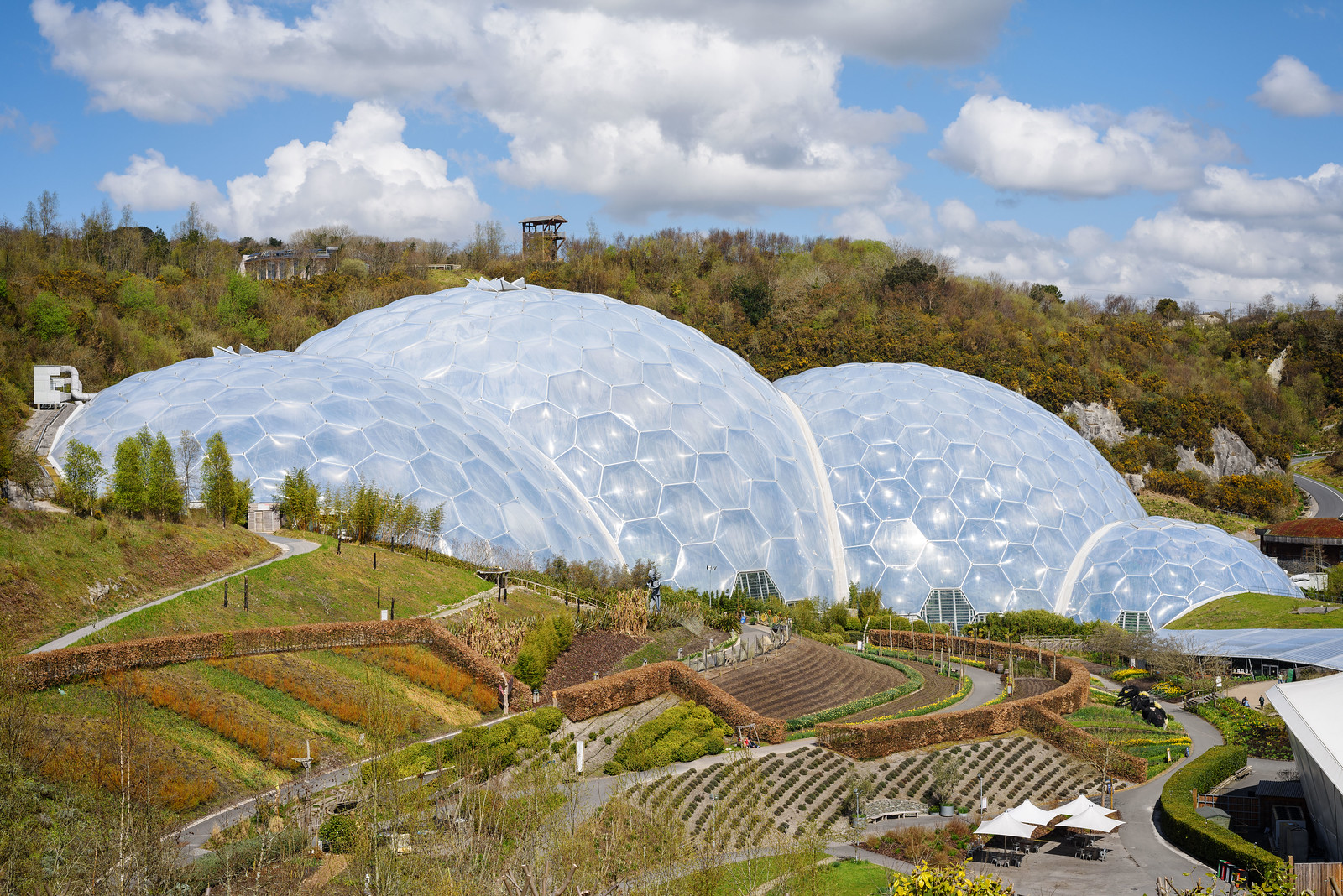 The lost gardens of Heligan are the grounds of an old stately home, renovated many years after they fell into disrepair. If you can time it to visit on a bright day, the colours simply explode in front of you, the greens in particular being a spectacular sight. Again, this provided ample opportunity for our son to charge about (the site is massive) and there’s some terror in the form of a rope bridge across the valley too. 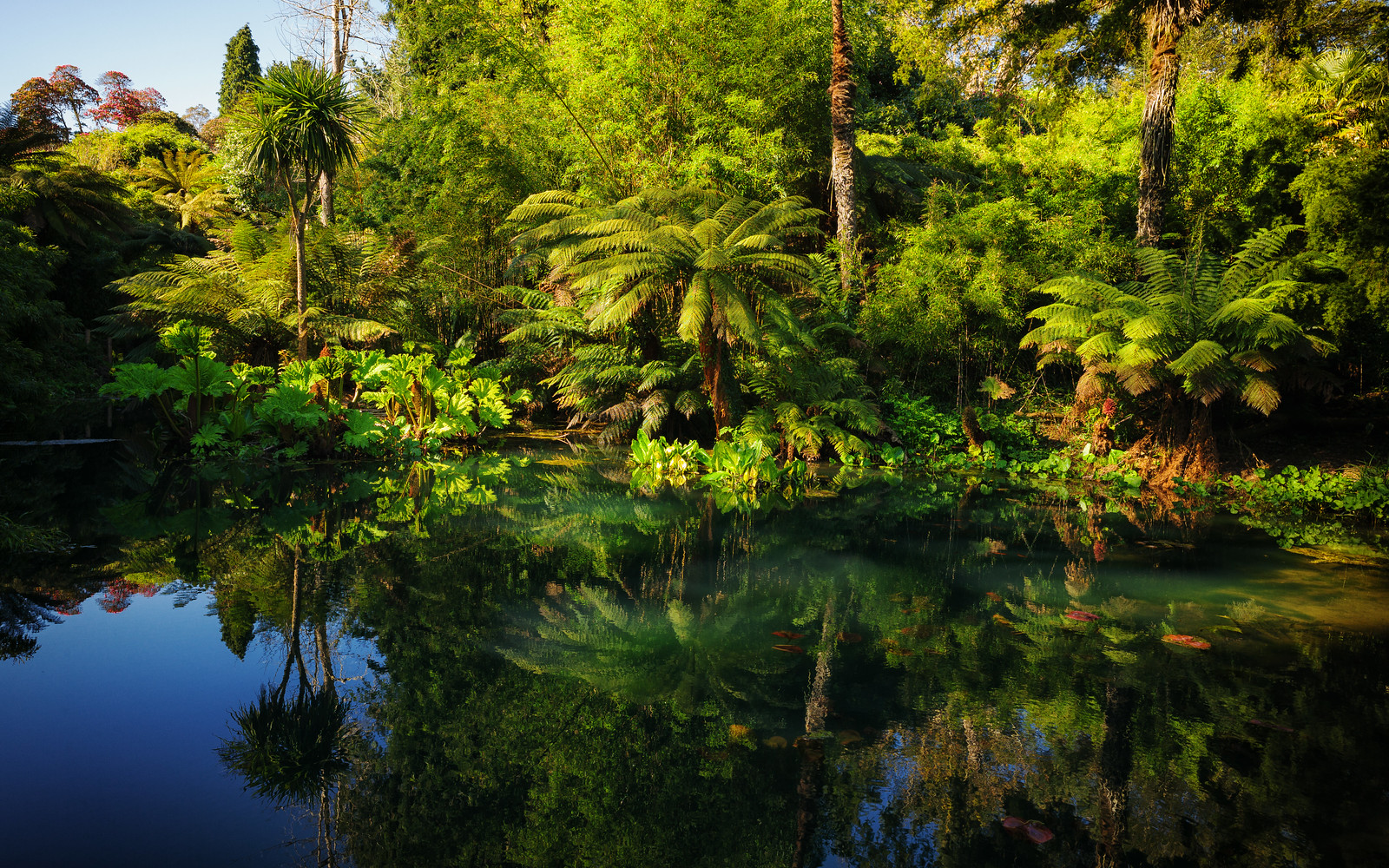 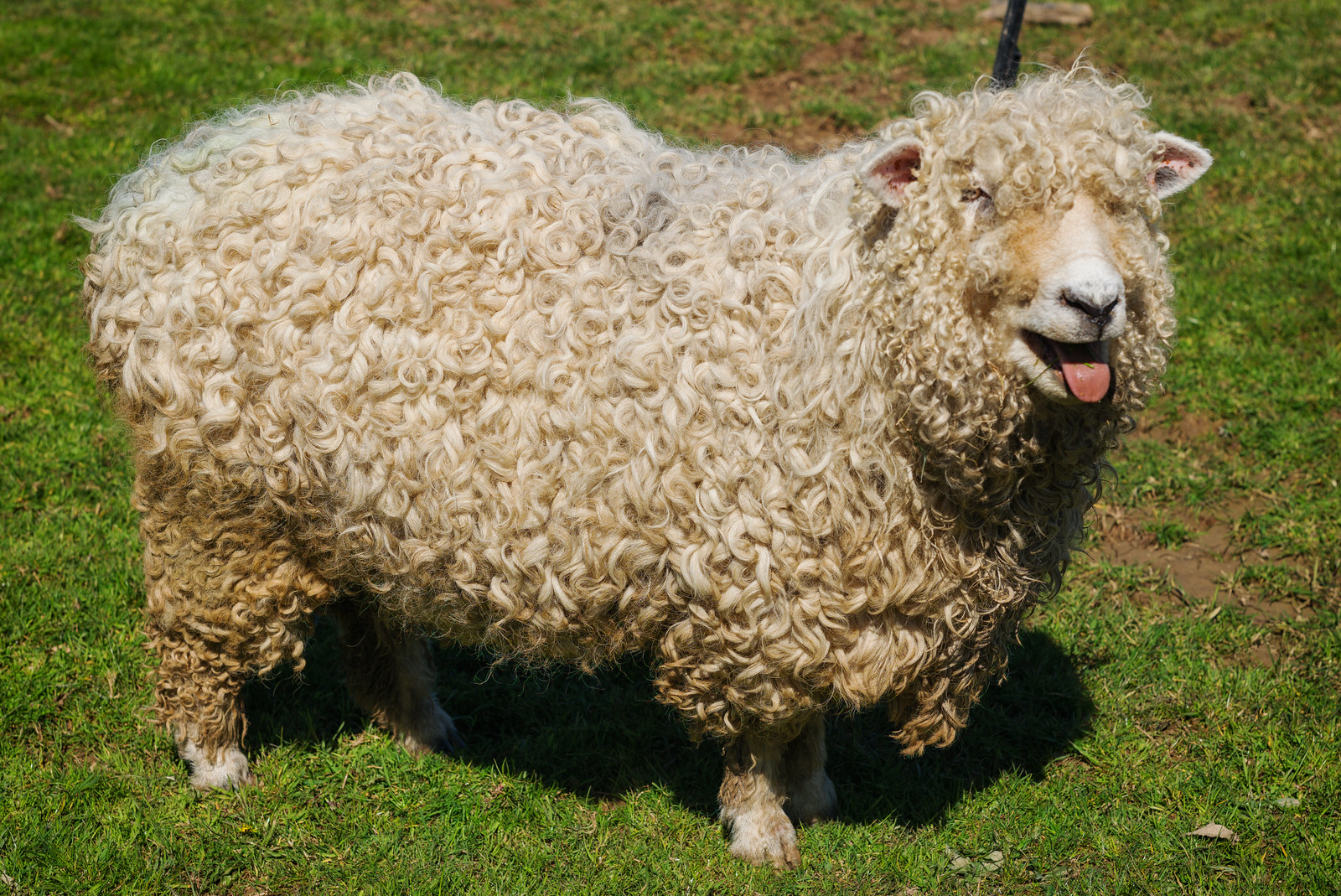 If you appreciate gardening and plants, this is probably a better place to visit than Eden, as it has a variety of native and non-native species that can grow in the particular micro-climate of Heligan. 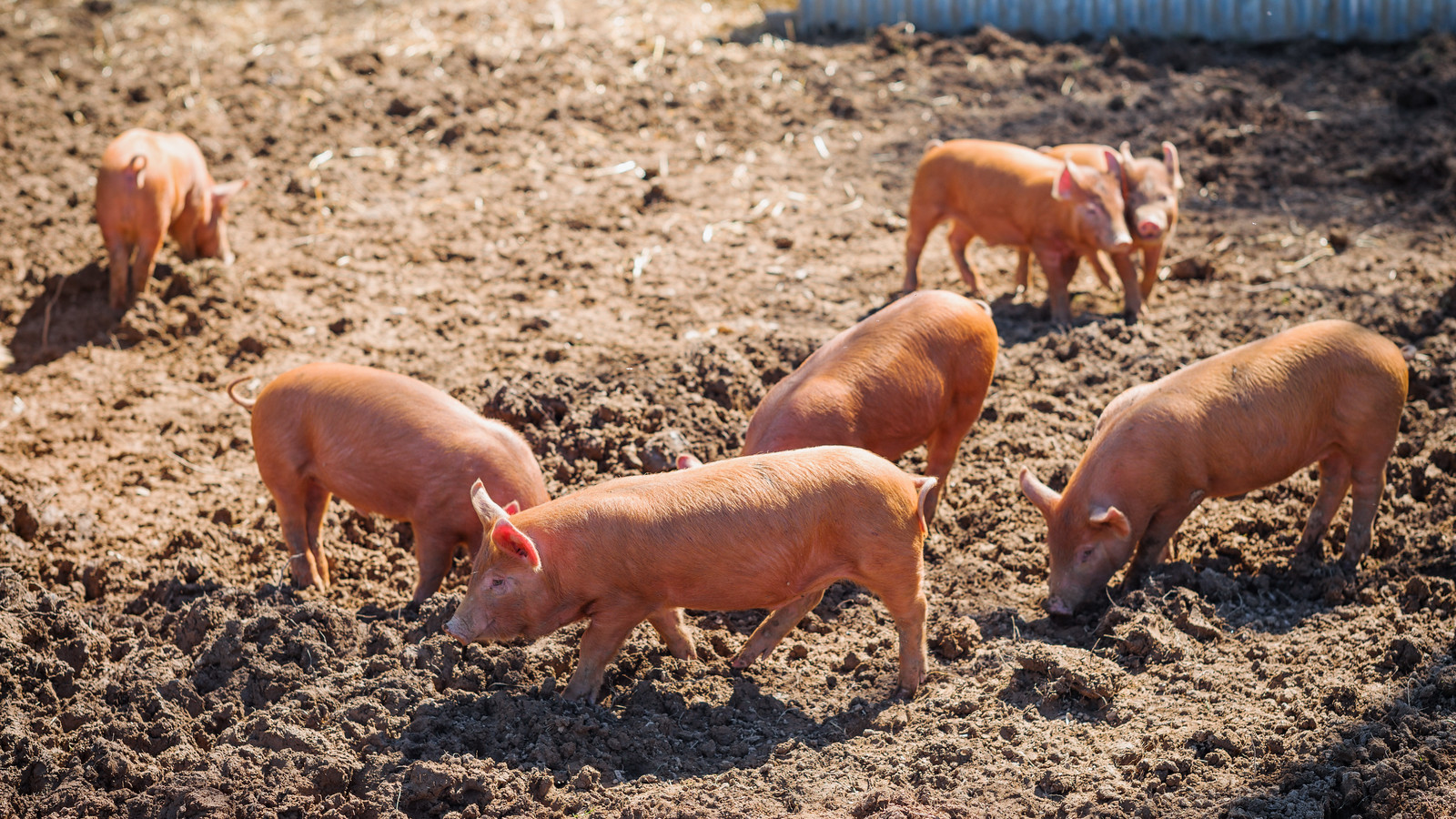 It’s less spectacular, but for some will be more interesting. That said, I will always visit both if I have the opportunity. It’s worth taking your time in the hidden valley. Some of the best views aren’t obvious from the paths. 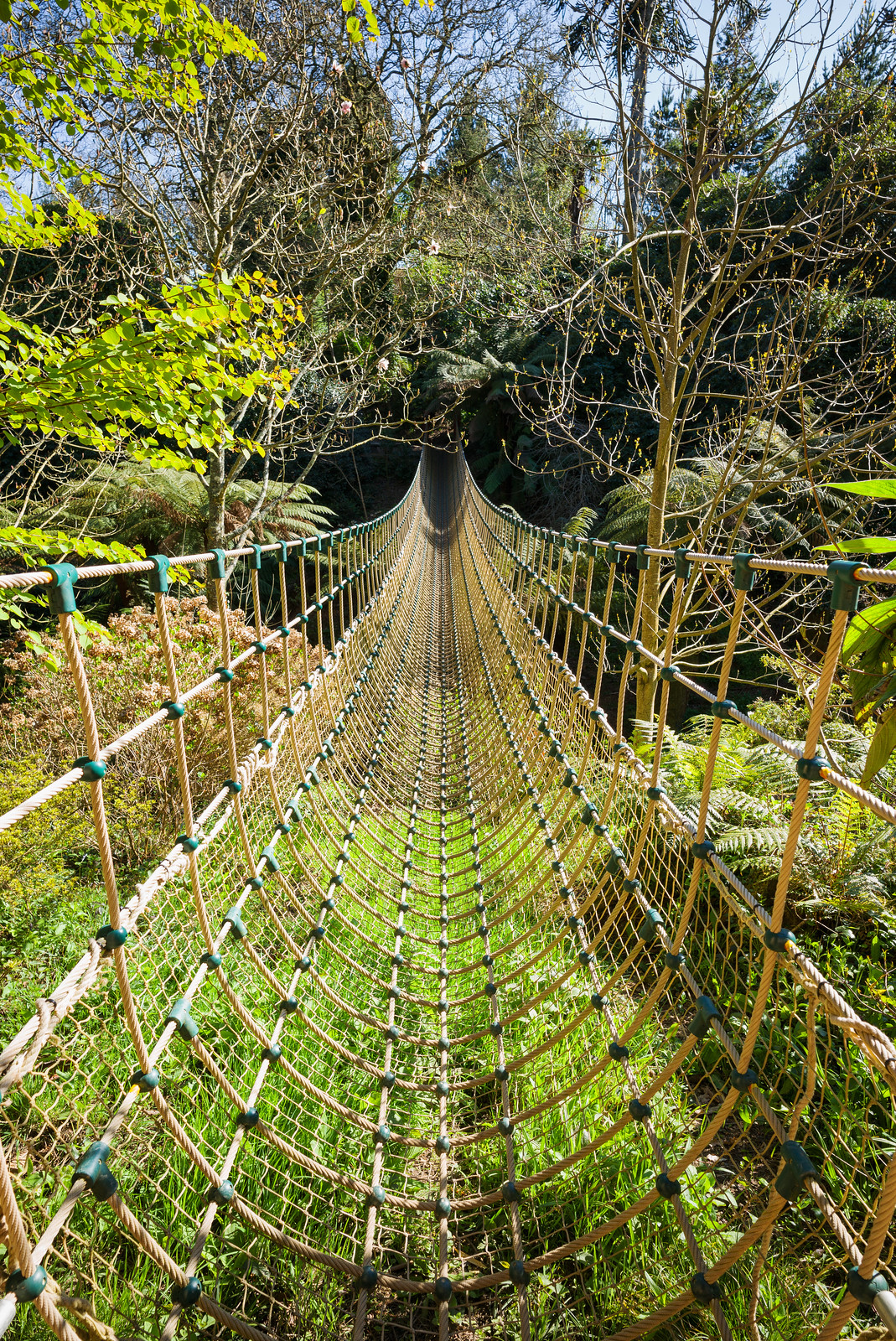 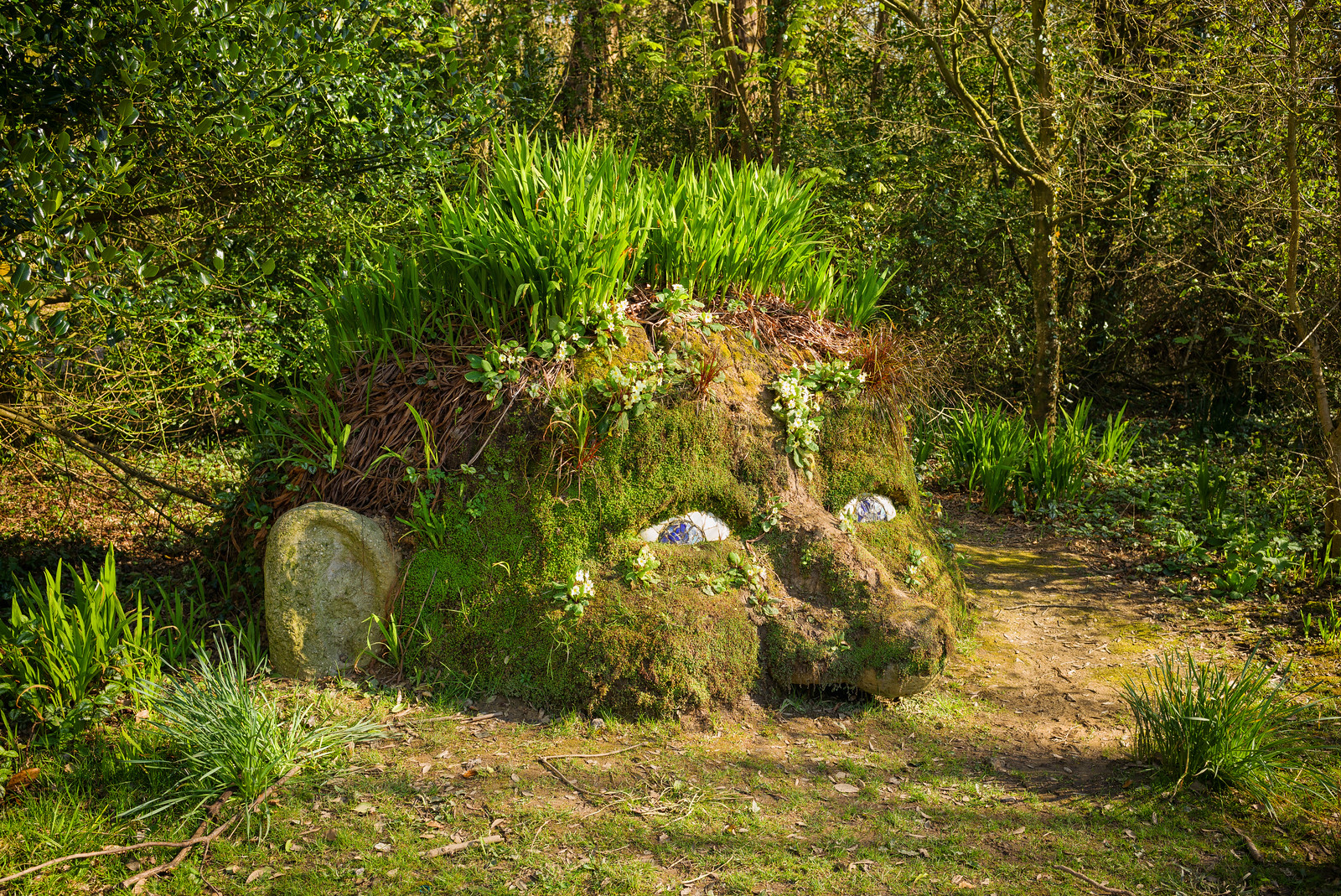 Having missed out on visiting for one reason or another in the past, we headed to Porthcurno to visit the Minack Theatre. The Minack is an open-air theatre, constructed above a gully with a rocky granite outcrop jutting into the sea. It’s spectacular here, but beware of: getting stuck behind tour buses on the way to Porthcurno (there’s no easy way to pass and the road is very steep); the windy road up to the theatre (usually scattered with people from tour buses who haven’t realised that cars also enter and leave the way they are walking); and it can be extremely windy. 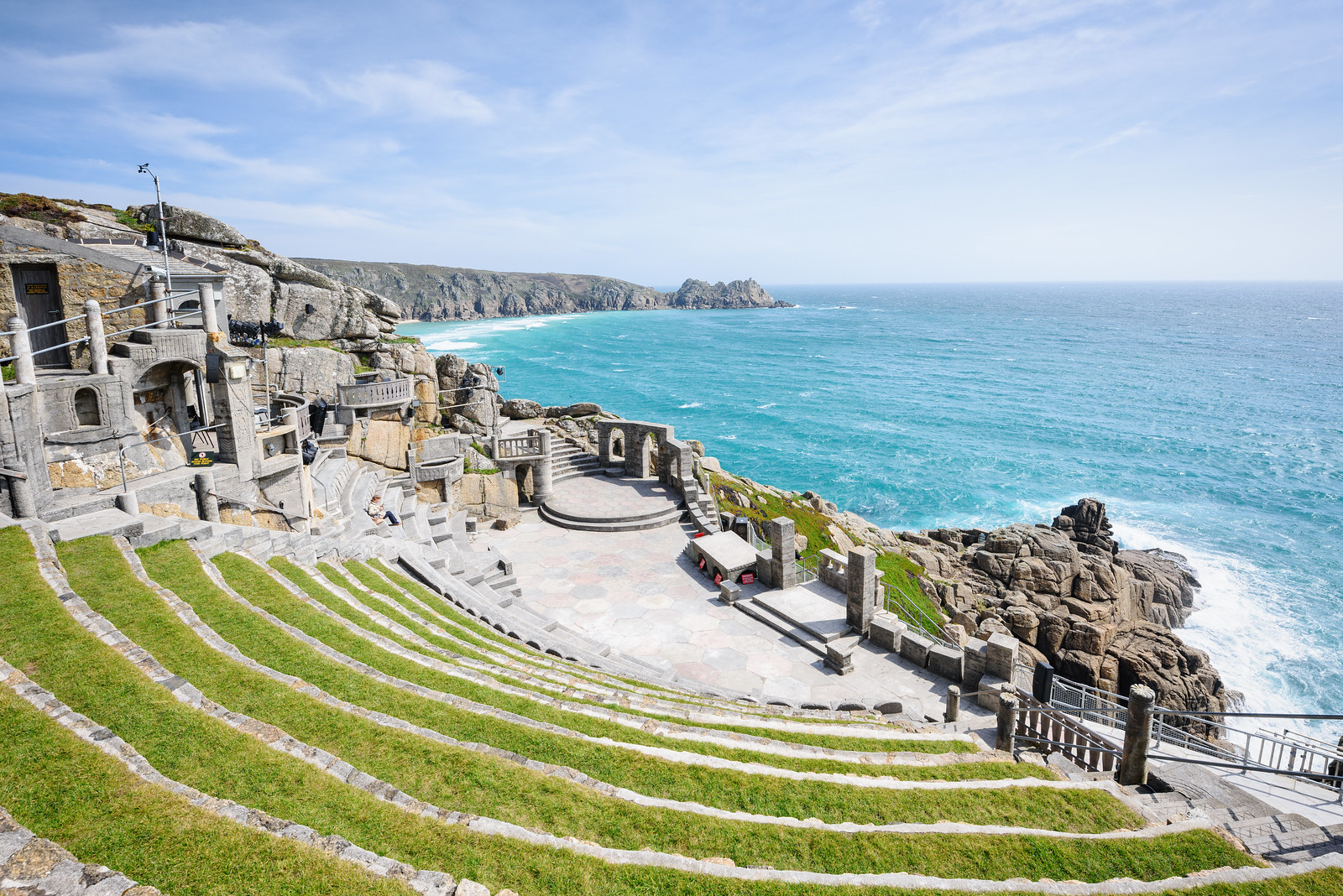 The theatre was the brainchild of Rowena Cade, who moved to Cornwall after the First World War and built a house for herself and her mother on land at Minack Point. In 1929, a local village group of players had staged A Midsummer Night’s Dream in a nearby meadow. They decided that their next production would be The Tempest and Rowena offered the garden of her house as a suitable location, as it was beside the sea. 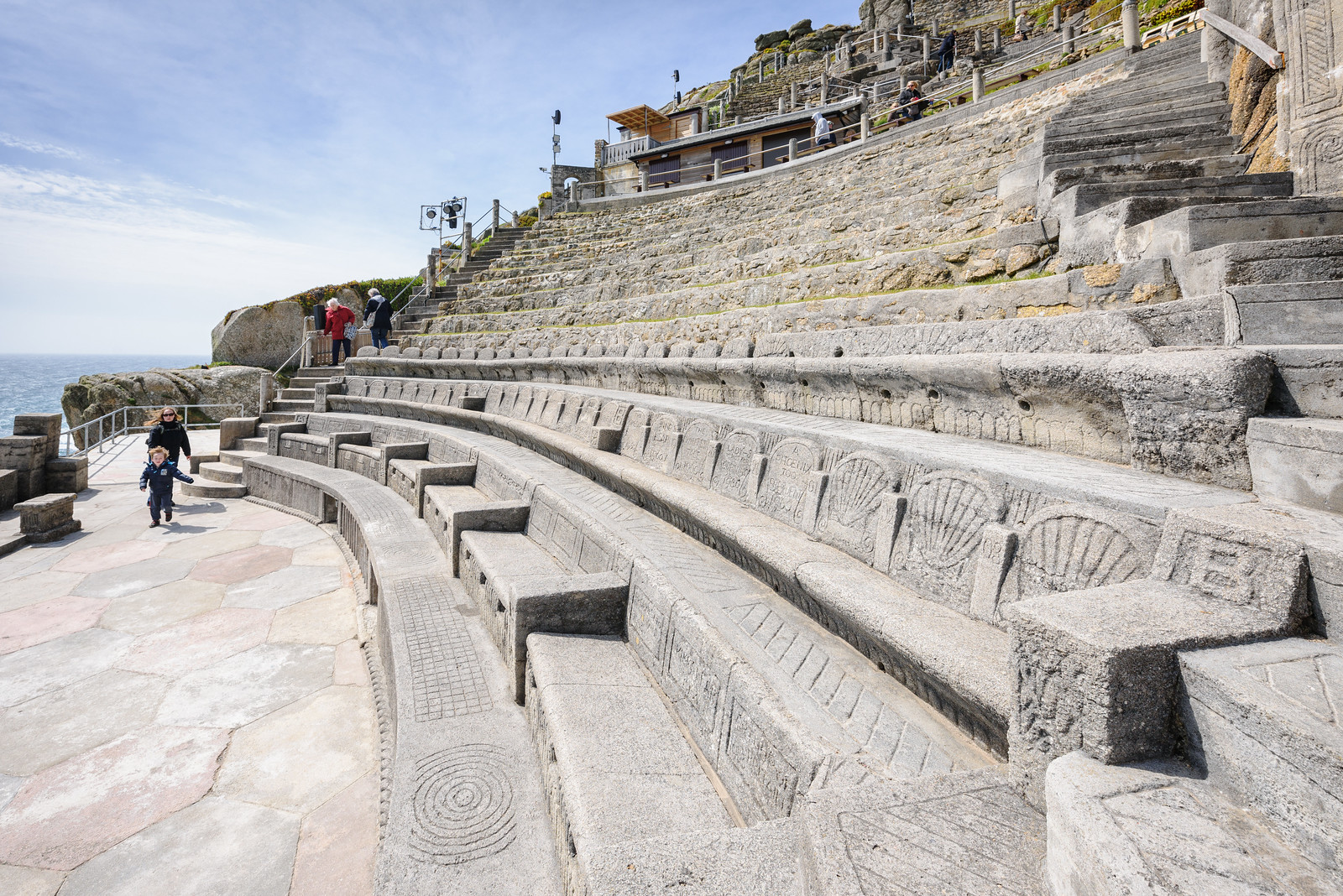 In 1932, The Tempest was performed with the sea as a dramatic backdrop, to great success. Rowena resolved to improve the theatre, working over the course of the winter months each year throughout her life (with the help of Billy Rawlings and Charles Angove) and the current theatre is the product of all that hard work. 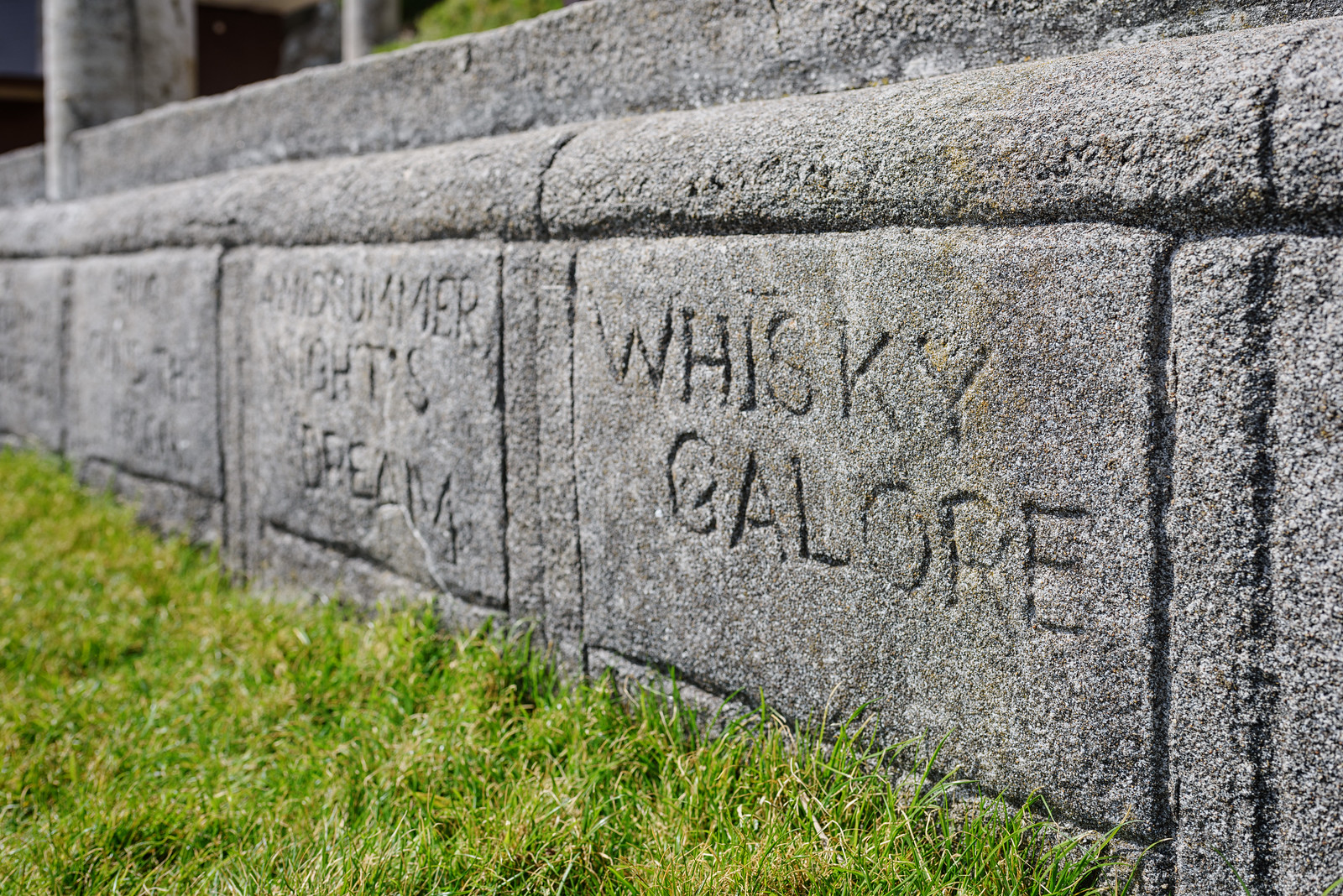 The season runs each year from May to September, with around 80,000 people a year seeing a show, and, like us, more than 100,000 pay an entrance fee to look around the site. As well as getting to admire the view and appreciate the effort that goes in staging performances at the theatre (never mind building it and renovating it) our son danced all over the stage (which was only mildly terrifying in the wind!) and then we retreated for baked potatoes in the cafe. 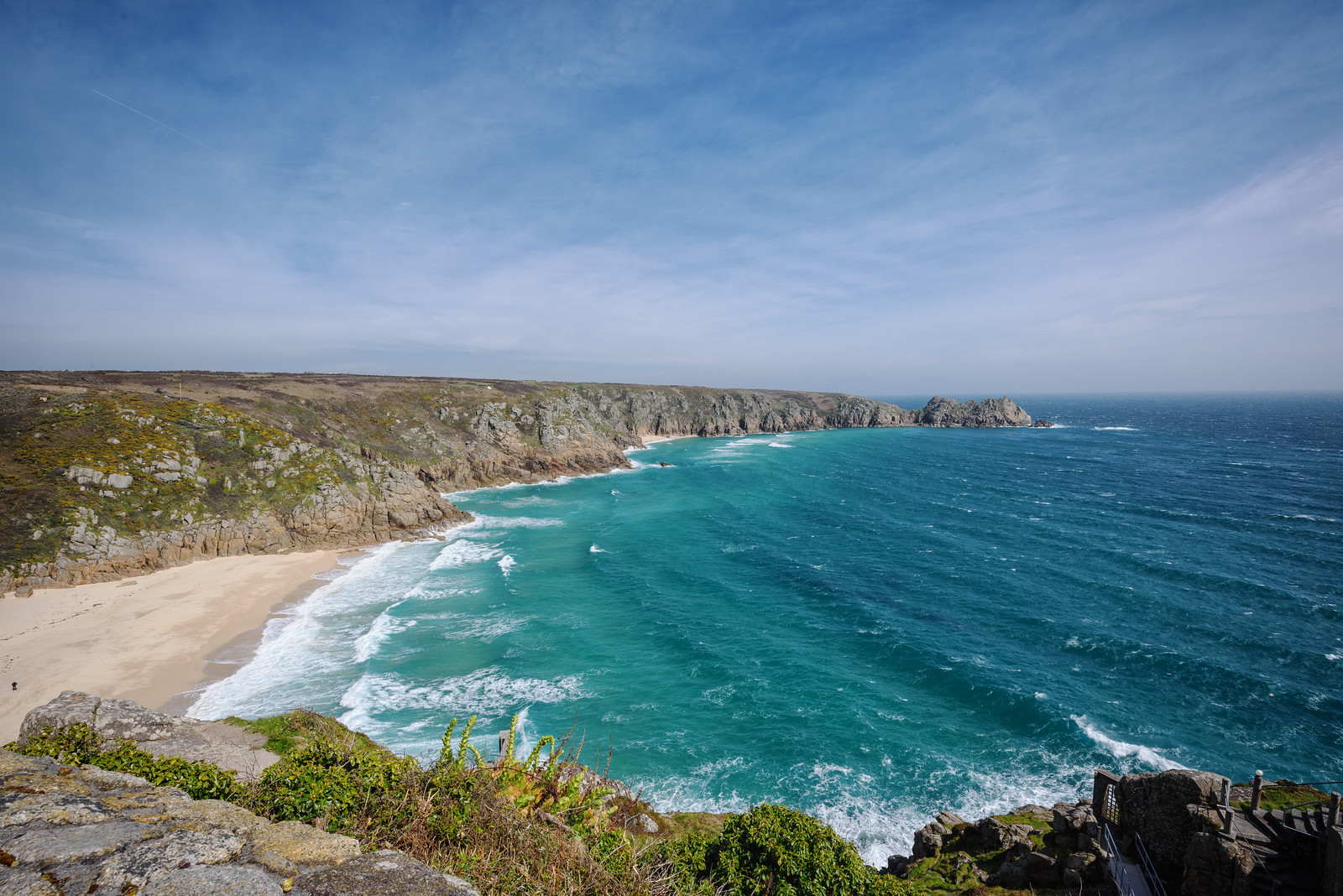 For those who don’t know, before the Internet and telephones long distance communication was largely by telegram, short, text message like messages sent via morse or similar codes by physical wires or radio. The network of cables that supported this was enormous, extending around the world, and the entry point into the UK for telegraph cables going right around the British Empire was Porthcurno.

This museum is an absolute gem. My view of this might have been skewed by the fact we visited after the tour groups had departed, but it takes what could be a dull subject and draws it together with the history of the 19th and 20th centuries and draws parallels with our own Information Age (fibre optic cables still enter the UK at Porthcurno). The museum sits in the building in which the staff College of Cable & Wireless (the UK’s main telegraphy company in the age of empire) resided for many years. The museum has lots of things for children to play with, interesting talks, and fascinating equipment for the adults to marvel at.

When you’ve finished in the main building, you can visit the wartime bunkers, full of working gear from the 30s and 40s and carved out of the cliffs. These were built to house the staff and keep them safe from bombing. They include a secret escape route you can explore with the aid of a hard hat. Not huge, but decently sized, this museum rivals those in London for standards and the staff are all very friendly.

Otherwise known as the village next to St Michael’s Mount. We stopped here on our way home from Porthcurno. Sadly, the tide was in and the sea was a bit rough to take a boat to the mount.

However, I don’t think we had seen the tide in before when visiting, so it was fun to see that and of course use it as an excuse to have fun in the beachside playground…

Despite not staying here we did of course visit to enjoy the views of the harbour and the excellent food. We also made friends again with a scary Hannibal Lecter style long haired cat, who scarily chattered away about all the small birds it wanted to eat (while wisely avoiding the Pterodactyl like seagulls). 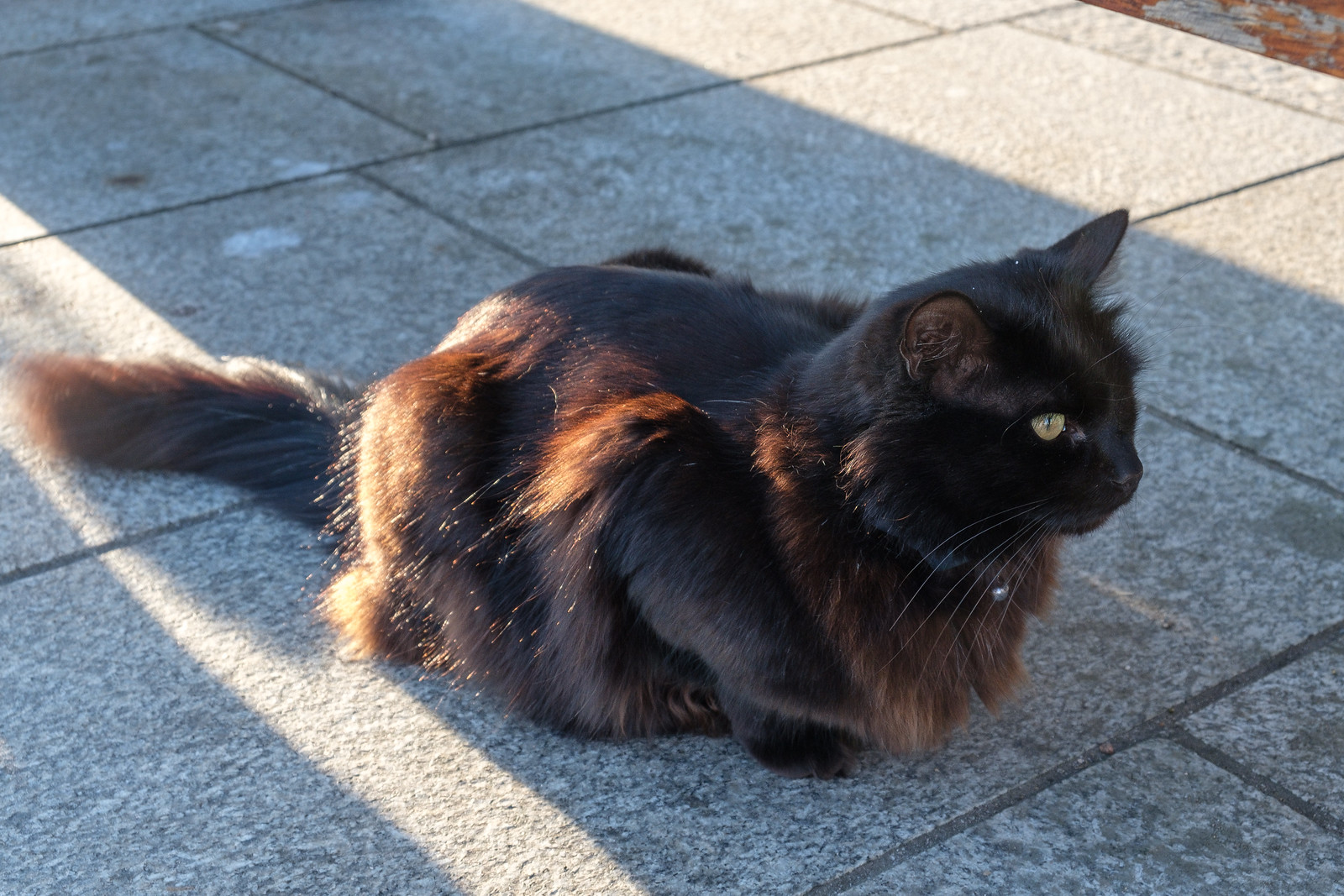 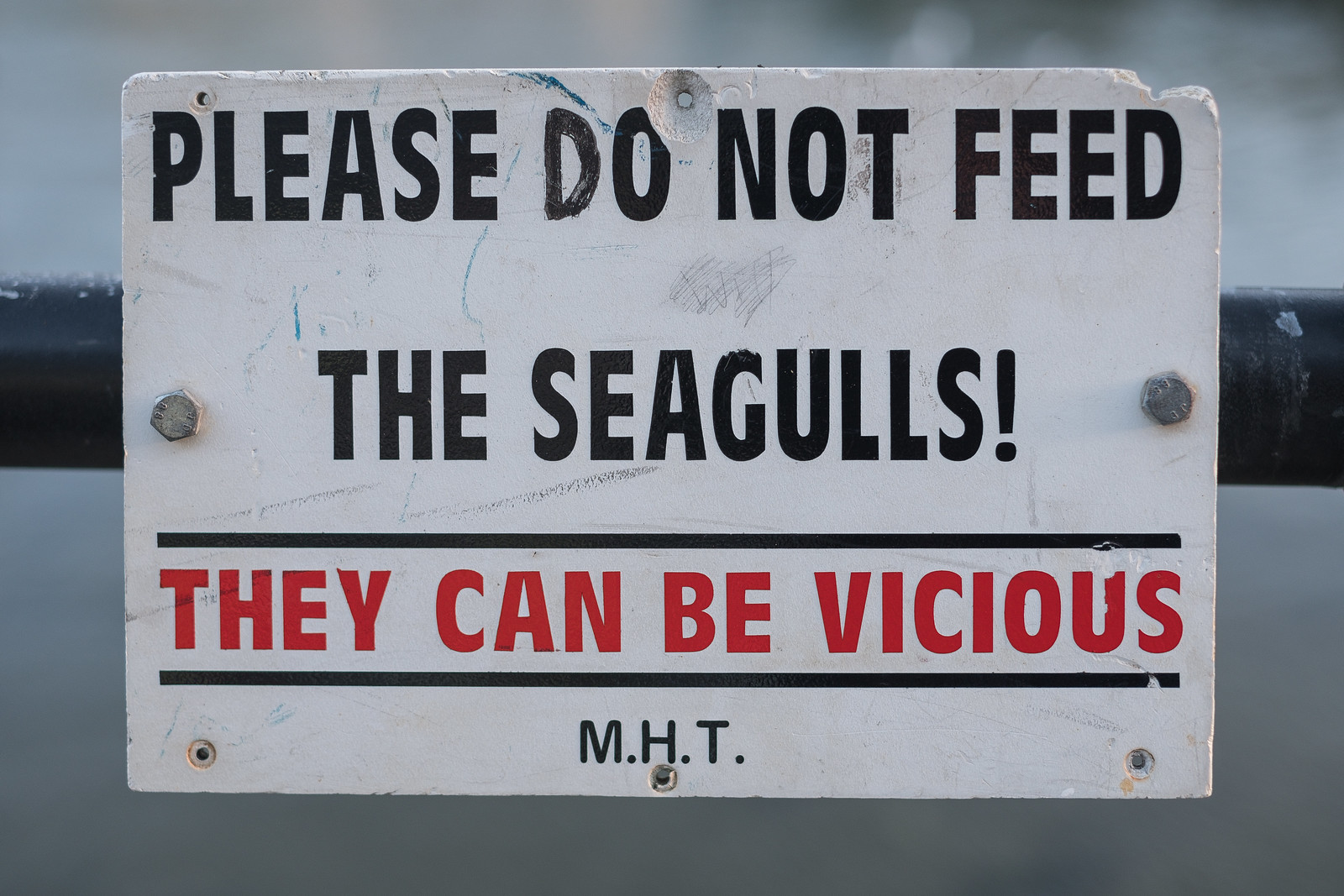 Speaking of seagulls, it must be a constant battle to keep the seafront clean – it looked like a a drive by with a guano machine gun had happened shortly before one visit! I will also mention in despatches the aquarium, which is small but perfectly formed and has tanks at the right level for children. 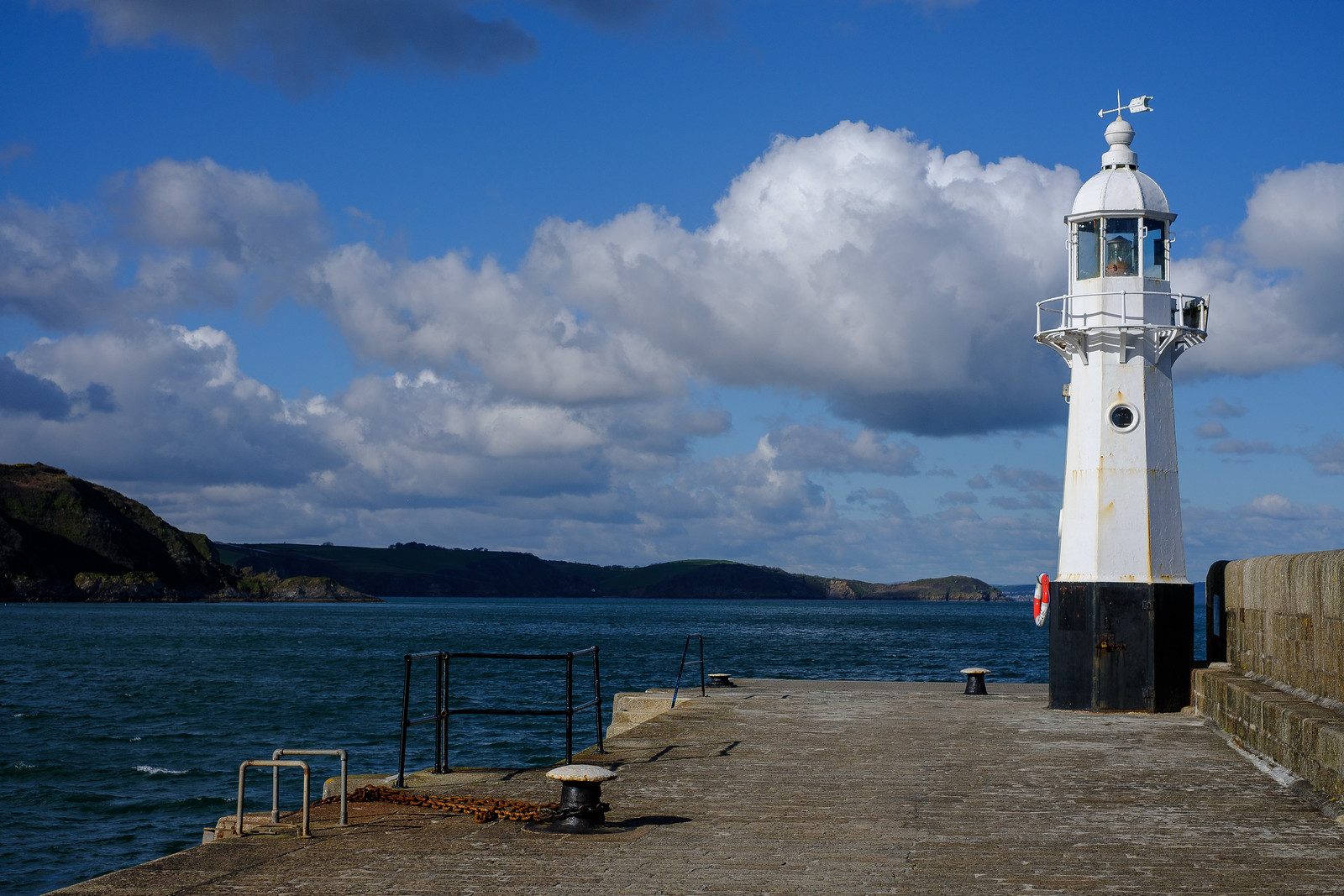 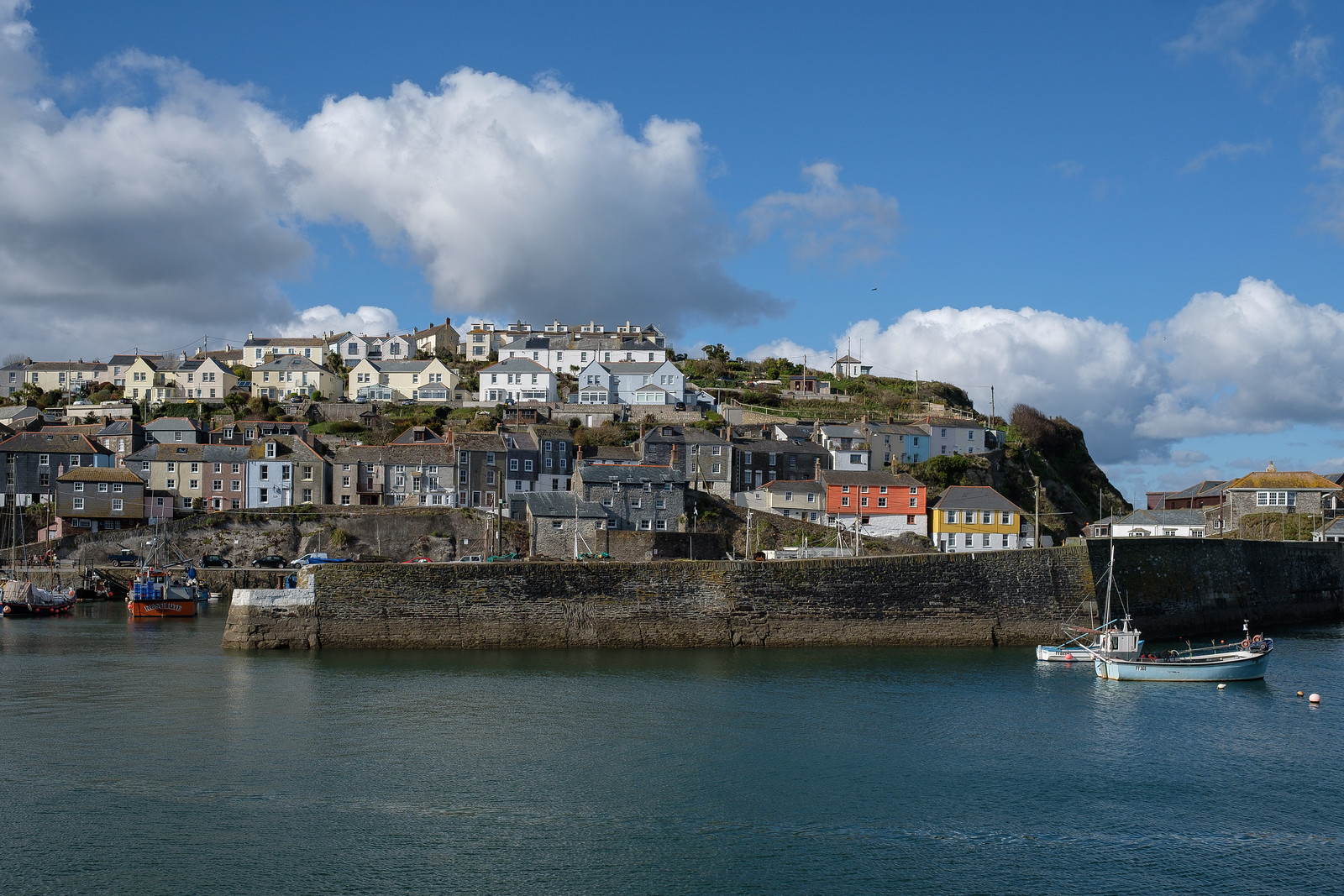 Sadly of course, Cornwall is now receding rapidly into the distance. Time to plan another holiday…