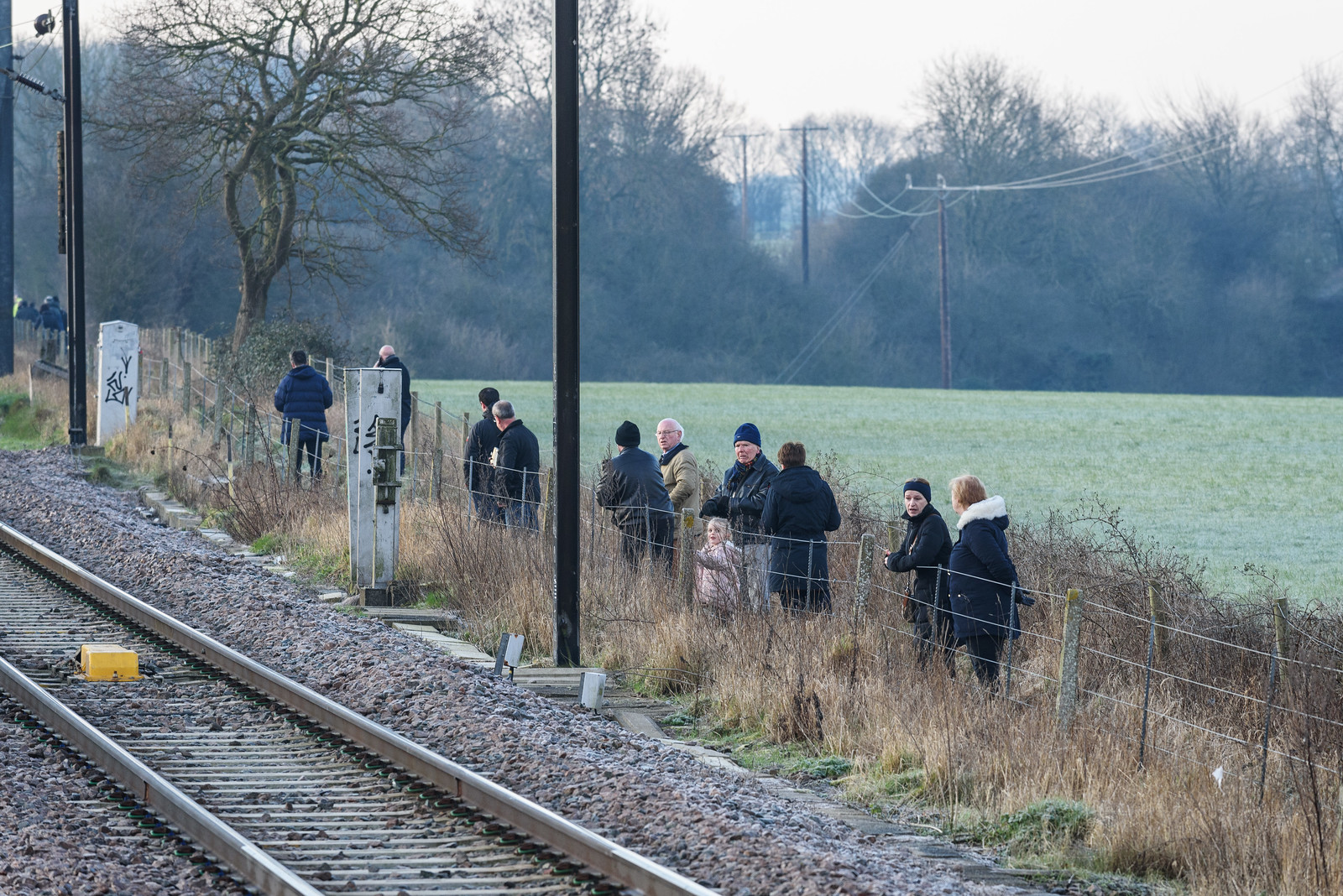 Once a holder of the world record for speed (being the first steam locomotive officially recorded in excess of 100mph), it had been rescued from being sent to the scrapyard at the end of mainline steam in the UK and via a series of adventures in the US and Australia had found itself in 2006 as the subject of a long, multi year restoration at the cost of 4 million pounds. It was running for the first time on the East Coast mainline with both VIPs and fare paying passengers on board. 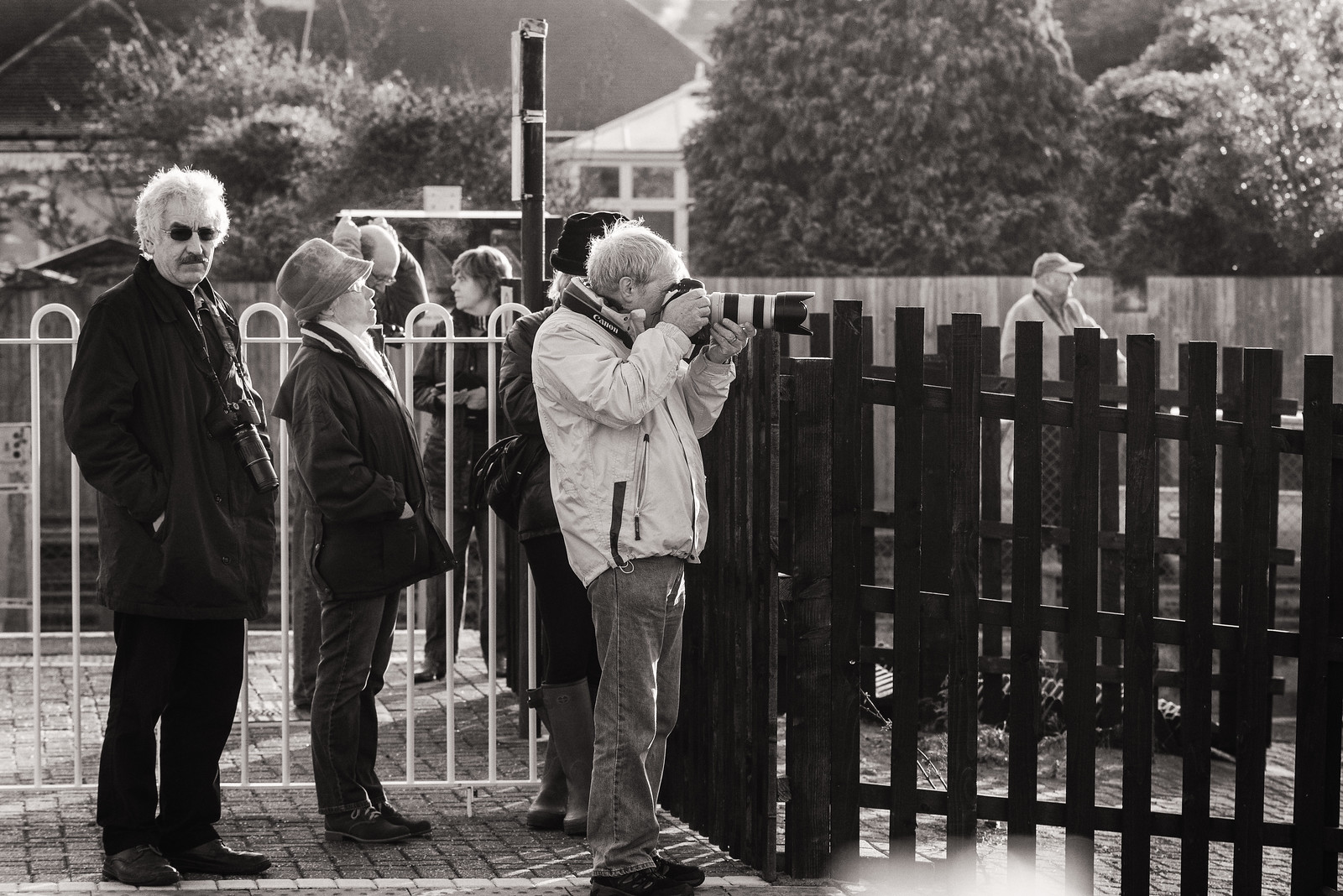 When I arrived, about 20 minutes before the scheduled arrival it looked like the local press photographer had already staked out the end of Platforms 1 and 2 (which have the best views of trains coming from London), so because I came armed with a 4K camera (my tiny Panasonic LX100) as well as my Nikon D750 and I didn’t want to get in the way, I headed for the end of Platforms 3 and 4, which were unoccupied when I arrived. 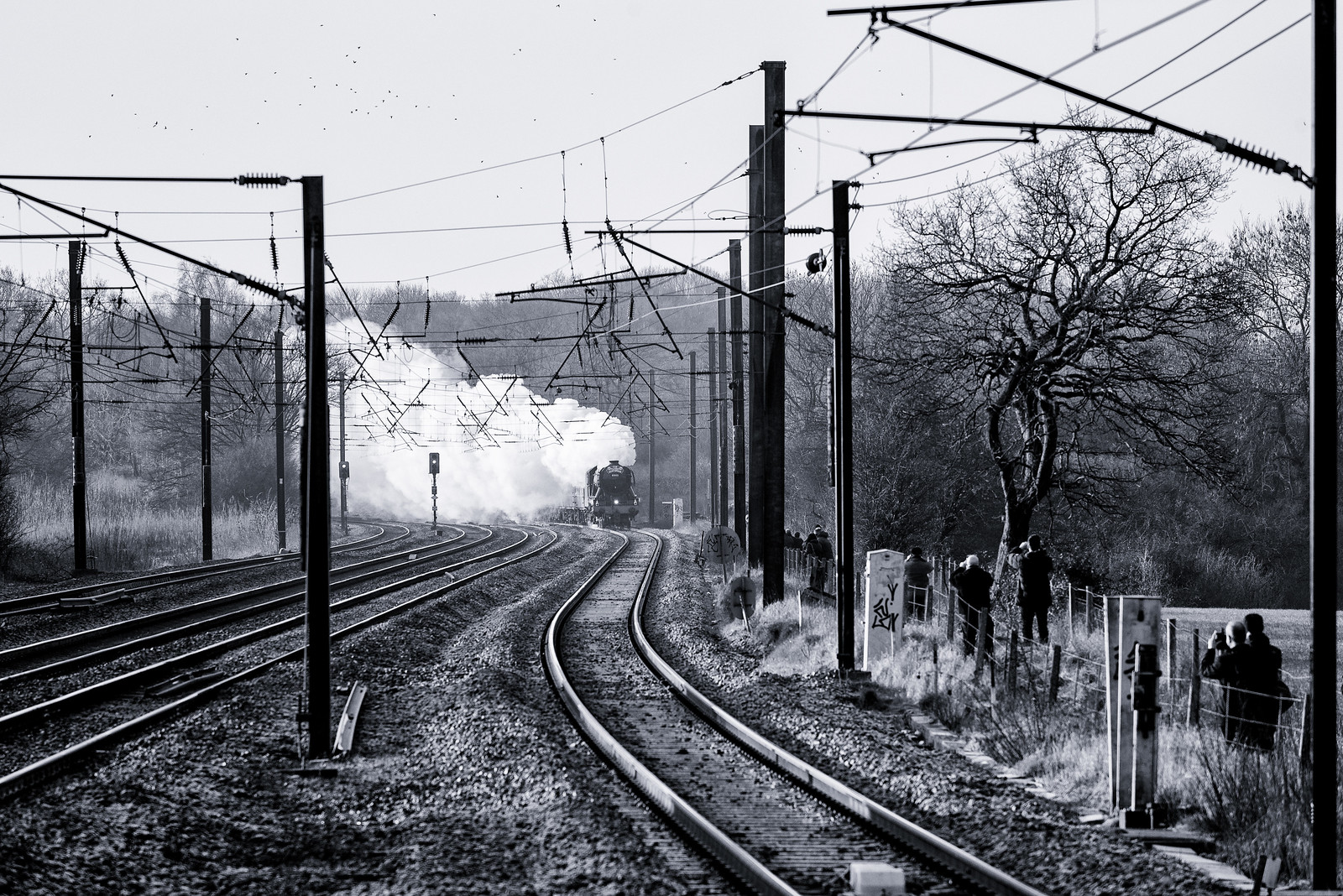 My first challenge was the height of my tripod. I had taken my travel tripod (because I was heading for work immediately afterwards) – which unlike my more solid tripod, didn’t exceed the height of the fence at the end of the platform. However, I thought if I zoomed the LX100 lens out and slipped it through one of the gaps in the fence it might work and so it proved (only a little of the fence in view on the video 😉 ). 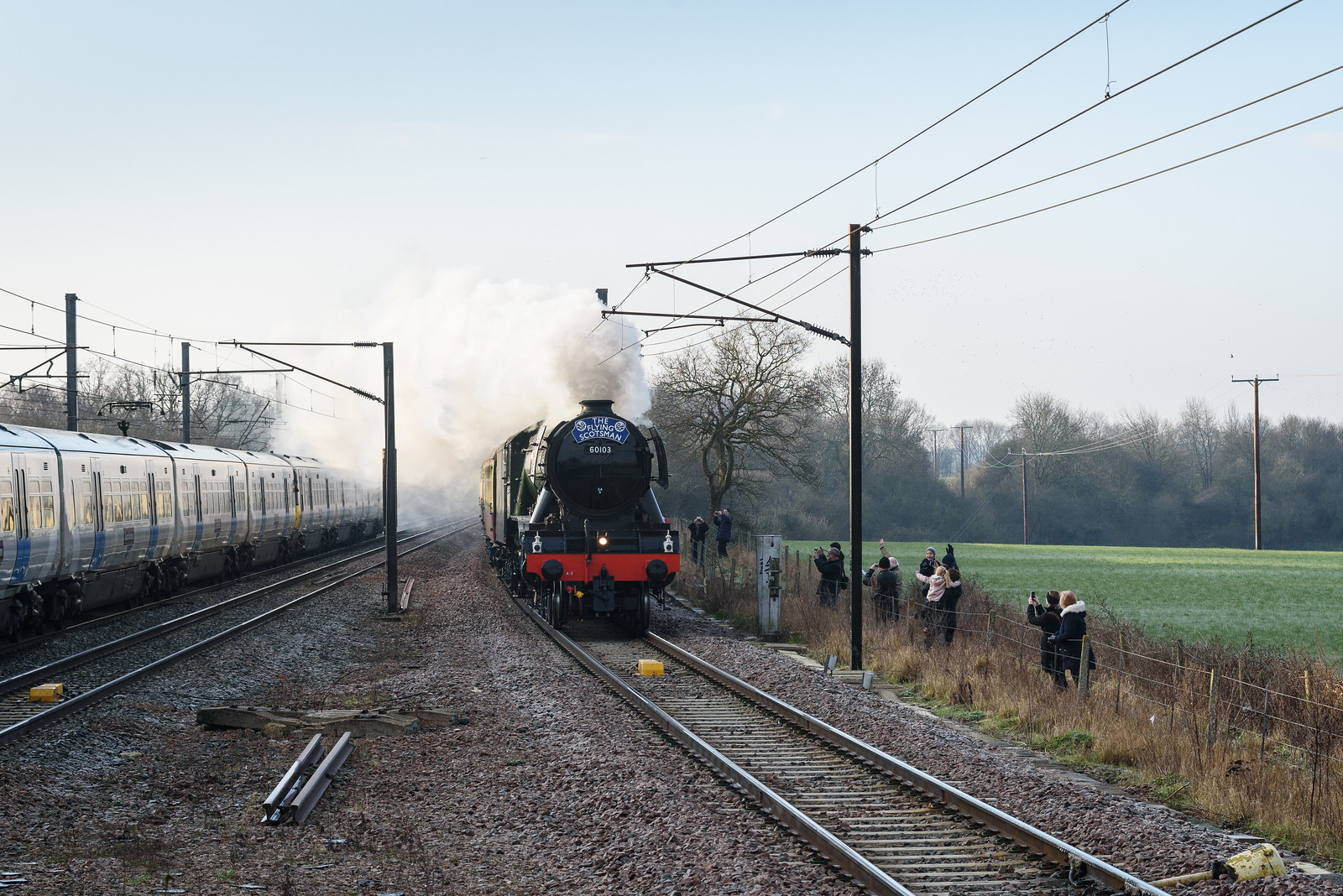 Having set up the Panny for video, the next challenge (as ever), was setting up the D750 in such a way as to make sure the combination of ISO and dynamic range was sufficient for decent exposure without blowing out the highlights and keeping the shutter speed high enough to avoid motion blur. The only reliable way to do this is to set the exposure manually and meter off the ground in an area proximate to where the train will be. Last time I did this, I compromised by letting the highlights blow out a little. This time I had it just about right, although the sun moving in and out of the clouds just before the train came into view was something of a wind up given the manual exposure…

One thing I often hear people say is that if you are taking photos of an event you miss the experience. That simply isn’t true, if you are using a DSLR with a decent optical viewfinder, because you see a view of your subject optically, through the lens. It’s one reason why I’ll never use an EVF based camera (like most mirrorless cameras) for stills at this sort of event. I want to see the train through my own eyes. The D750 was excellent bar one thing, buffer depth. Having a D810 and D750 I’m often caught between the higher continuous frames per second of the D750 and the deeper buffer of the D810. This time I decided on the D750 because it’s better at higher ISOs. I used my Nikon 70-200mm F4 rather than the F2.8 version. The F4 lens is light and has better VR than the F2.8 lens. To be honest, if pushed I would probably sell the F2.8 VR II lens and keep the F4 lens, on account of its large size and it only really exceeding the F4 lens for portraiture. 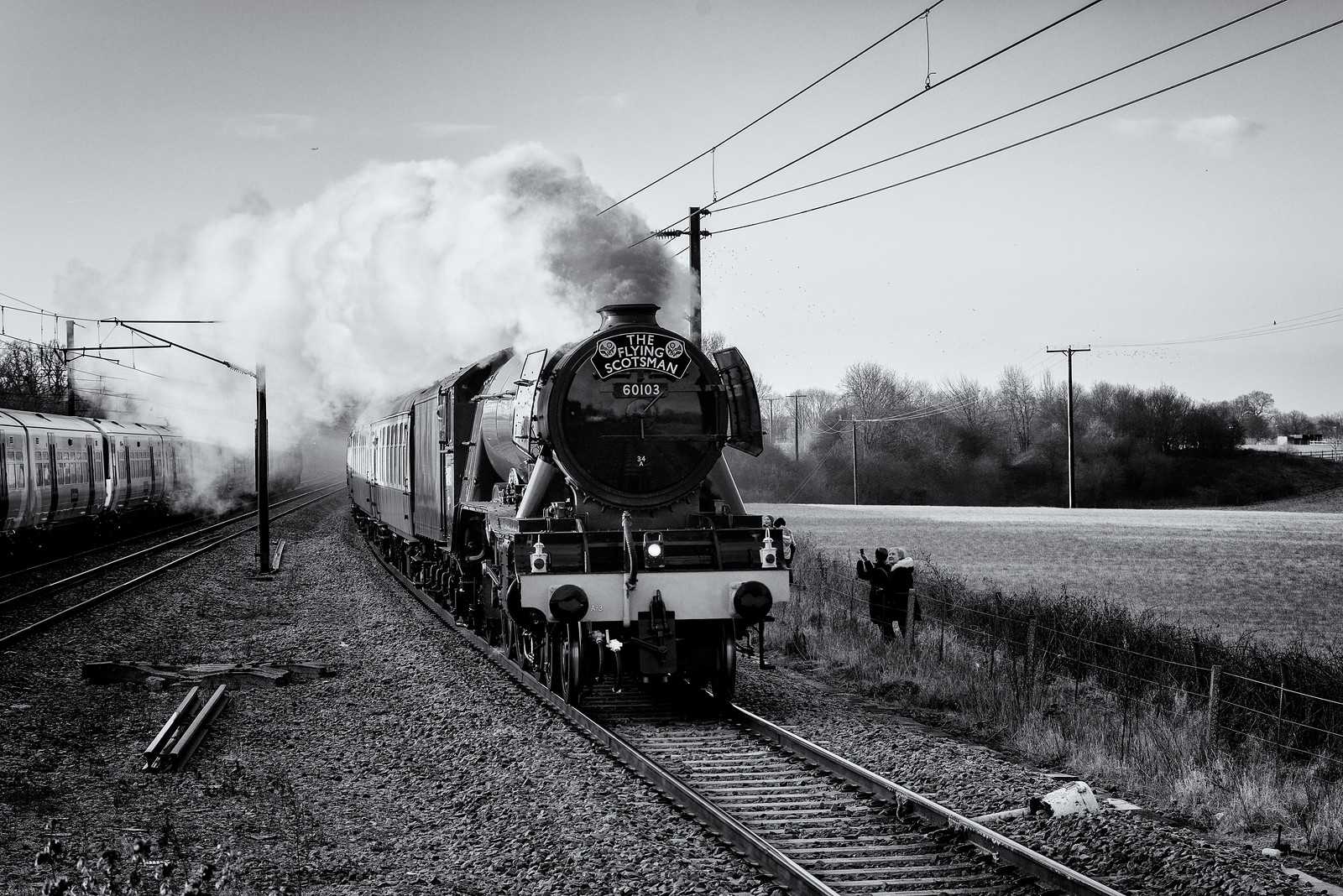 It was great to see how many people turned out to see the train. When I looked behind me I could see people all over the bridge to the platforms, people in the car park and lining the footpath next to the railway. One of the problems the train faced in its progress north was track intruders, but thankfully no one was that daft here. The kids with their parents were so enthusiastic, waving at the driver and the passengers when the train did pass. 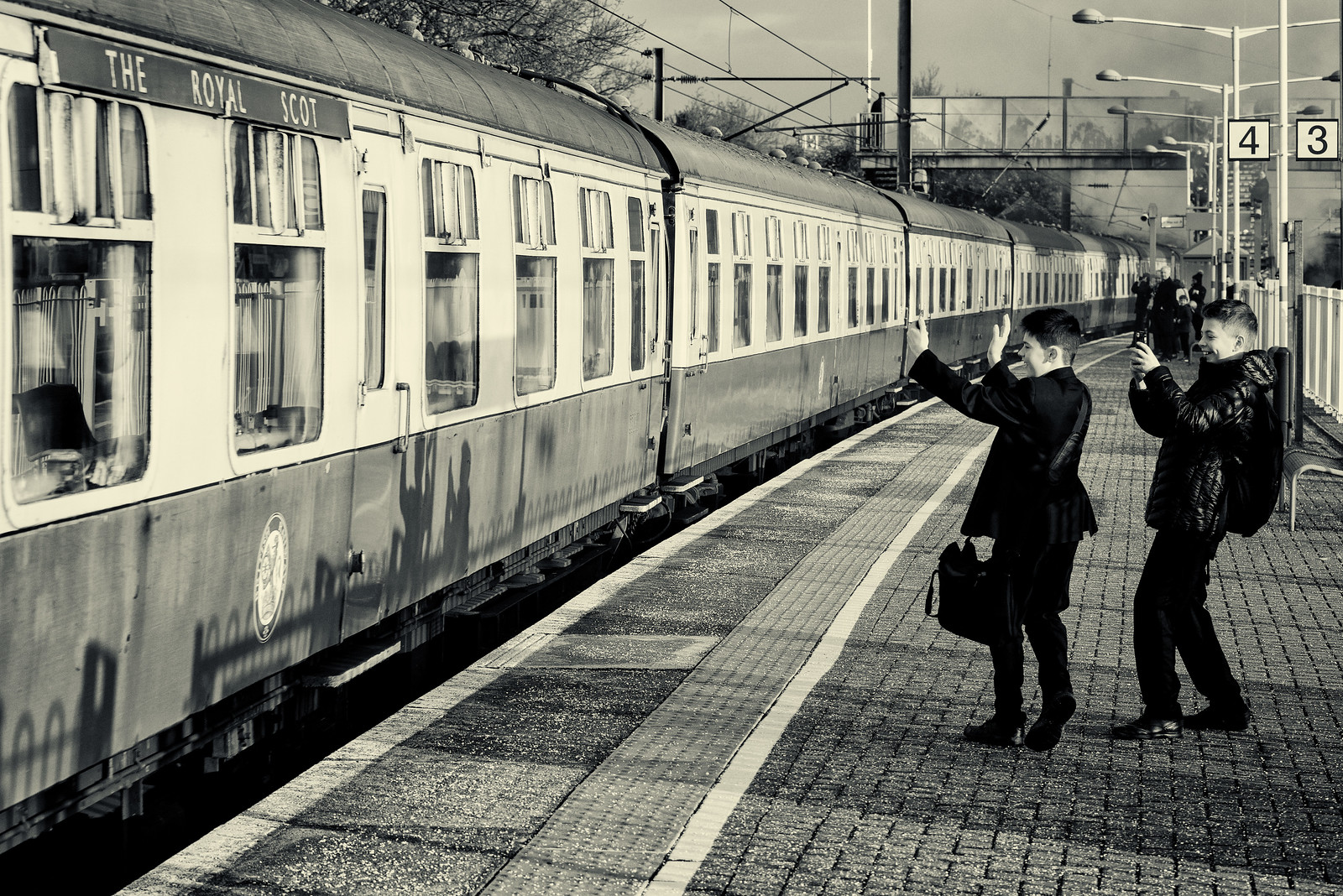 Finally, the anticipation was over, as we heard the sound of a… BBC news helicopter! On its way out of London the train was being followed by the Helicopter, which was a bit odd (I’m now used to the clacking of a steam train passing down a straight piece of track), but which was followed by the familiar sight of steam appearing as the locomotive rounded the corner. 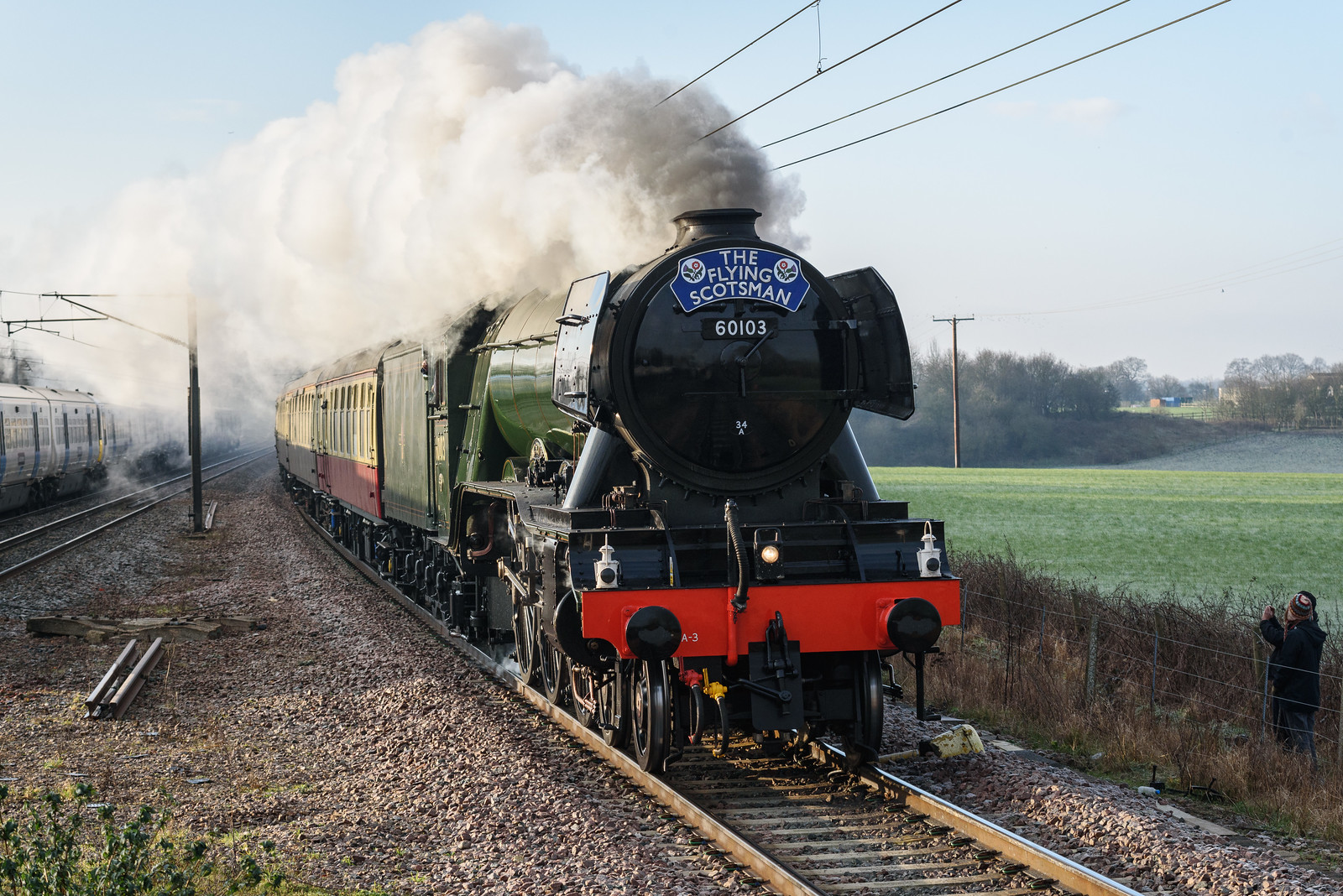 I do enjoy the moments of being by myself watching these grand machines pass, but I will confess I enjoyed the shared sense of wonder as the noise built while the train powered towards us. Then I heard the noise of a fast train coming in on the other line (a train from Cambridge to Kings Cross) which may or may not have blocked the view of those on the other platforms. I didn’t really get a chance to think about it too hard as I fired off a burst with my D750 to capture the engine in all its glory. This shot, of the driving passing in his cab, is probably my favourite of the lot. 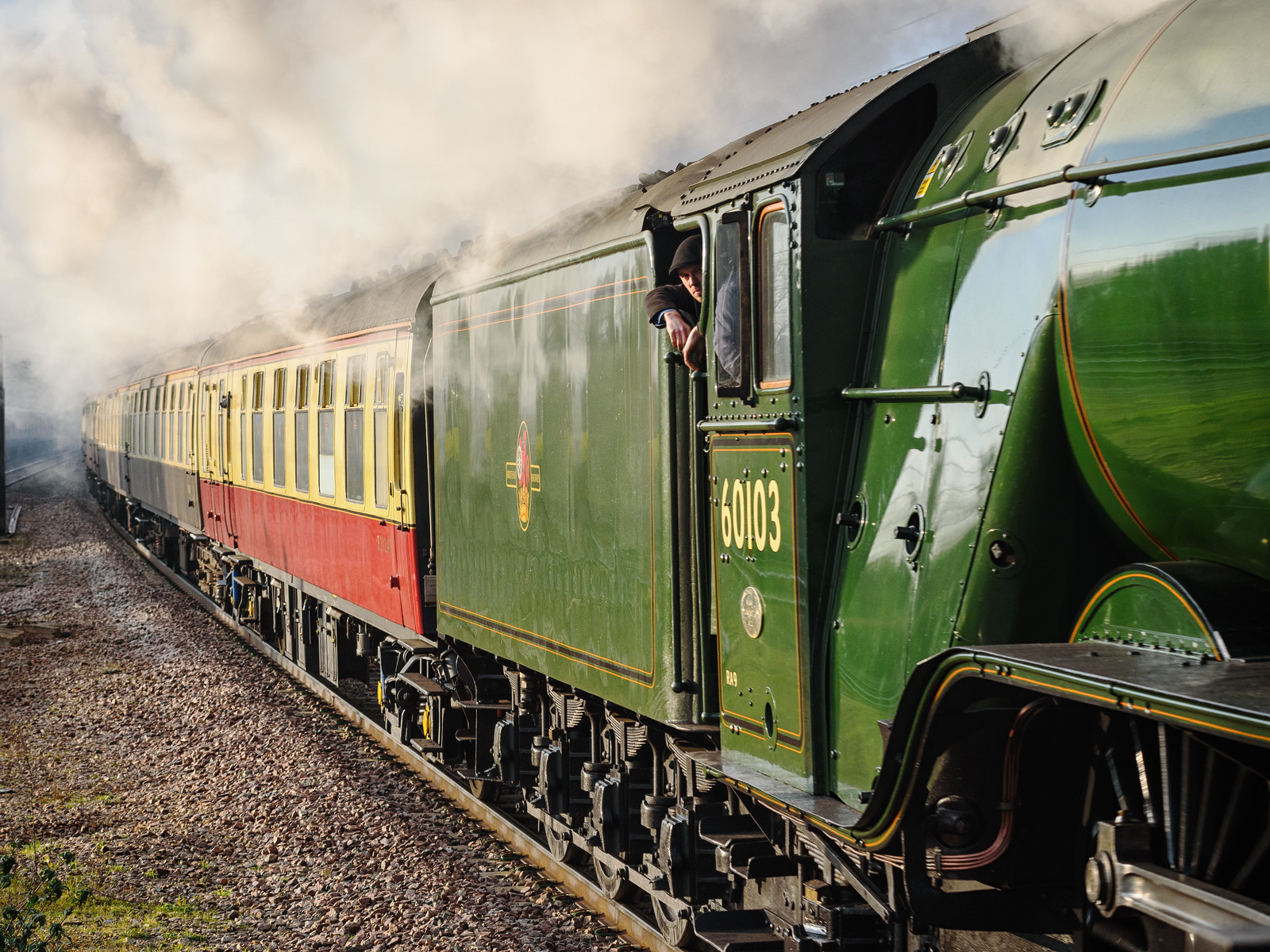 All too soon, the Flying Scotsman thundered through in what felt like the blink of an eye and all that was left was the sound of the helicopter and the smiles on everyone’s faces.

About 2 minutes later, while I was packing up my kit, what I assumed was the diesel tasked with pulling the train back to London in the evening (as the Flying Scotsman itself was staying in York) shot through, so I snapped it with the LX100. 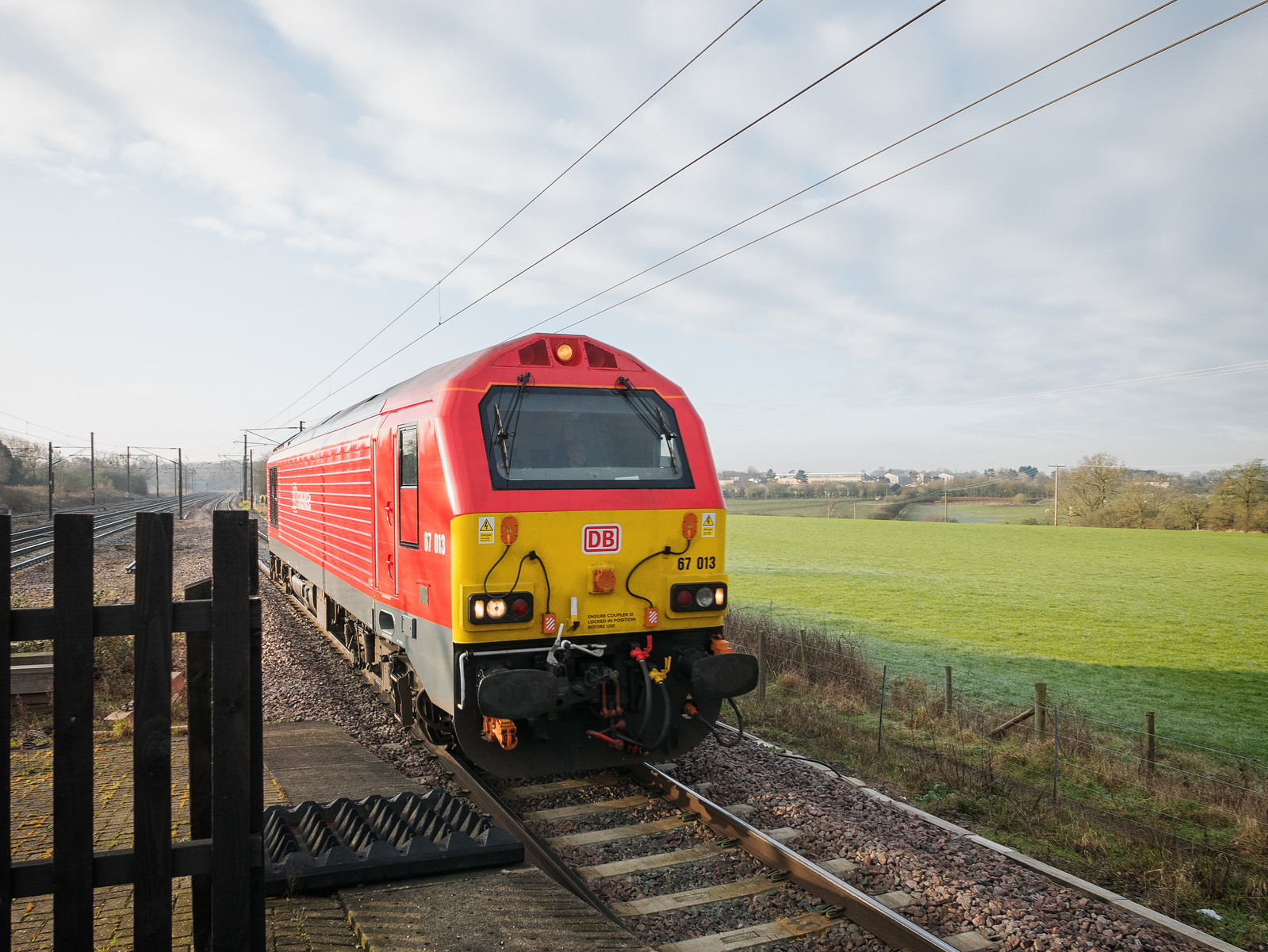 All in all, one amazing Thursday morning.