Sadly, you find me in a situation this morning where my mood is such that I would rather blow a trumpet in someone’s face. I don’t think I’ll ever understand why in the process of trying to achieve something some people choose to behave in a way that amounts to pouring fuel over the fires of a simmering dispute (to beat an extended metaphor to death…). Never mind, I’m sure I’ll get over it somehow. 😉 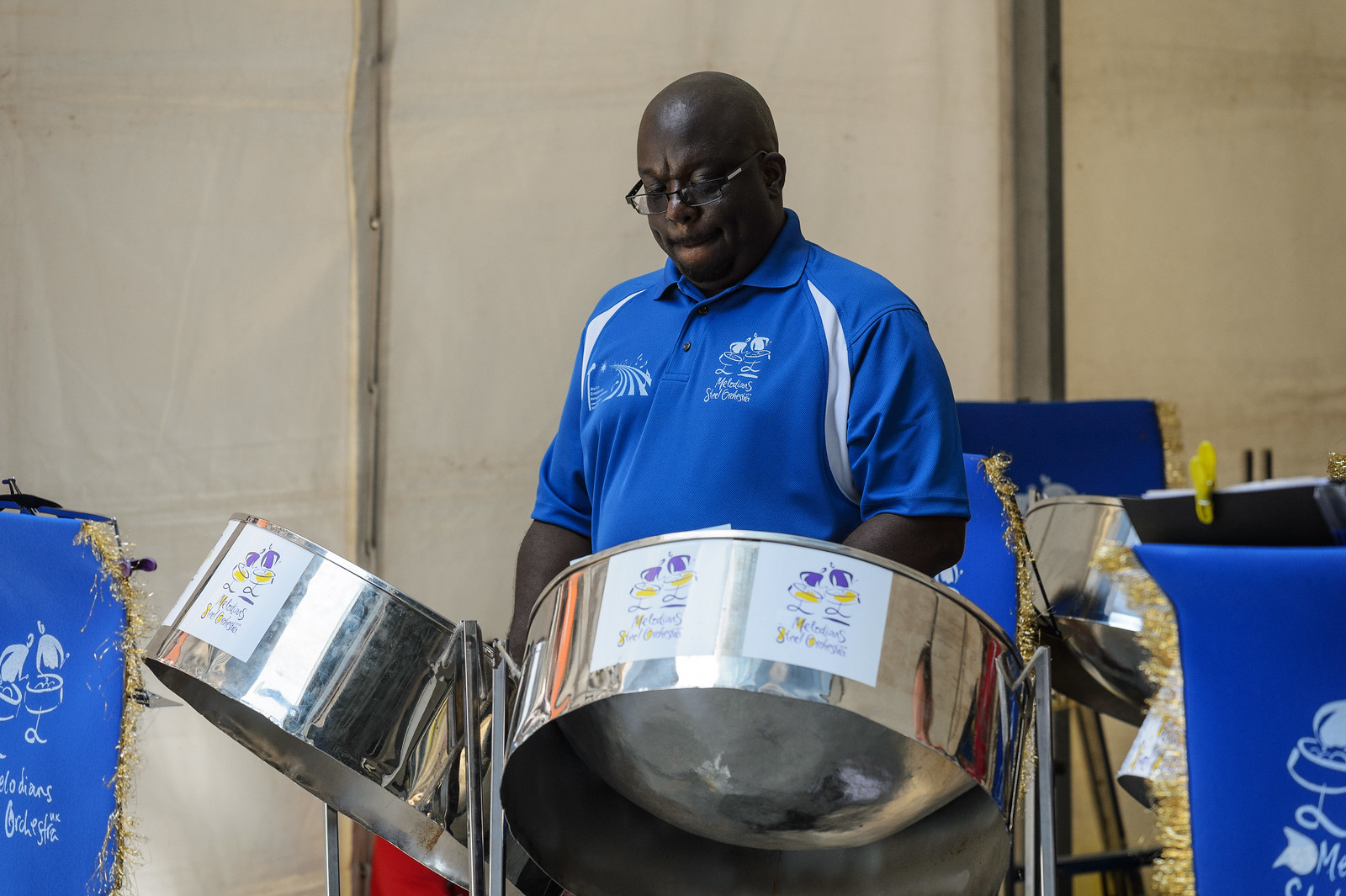 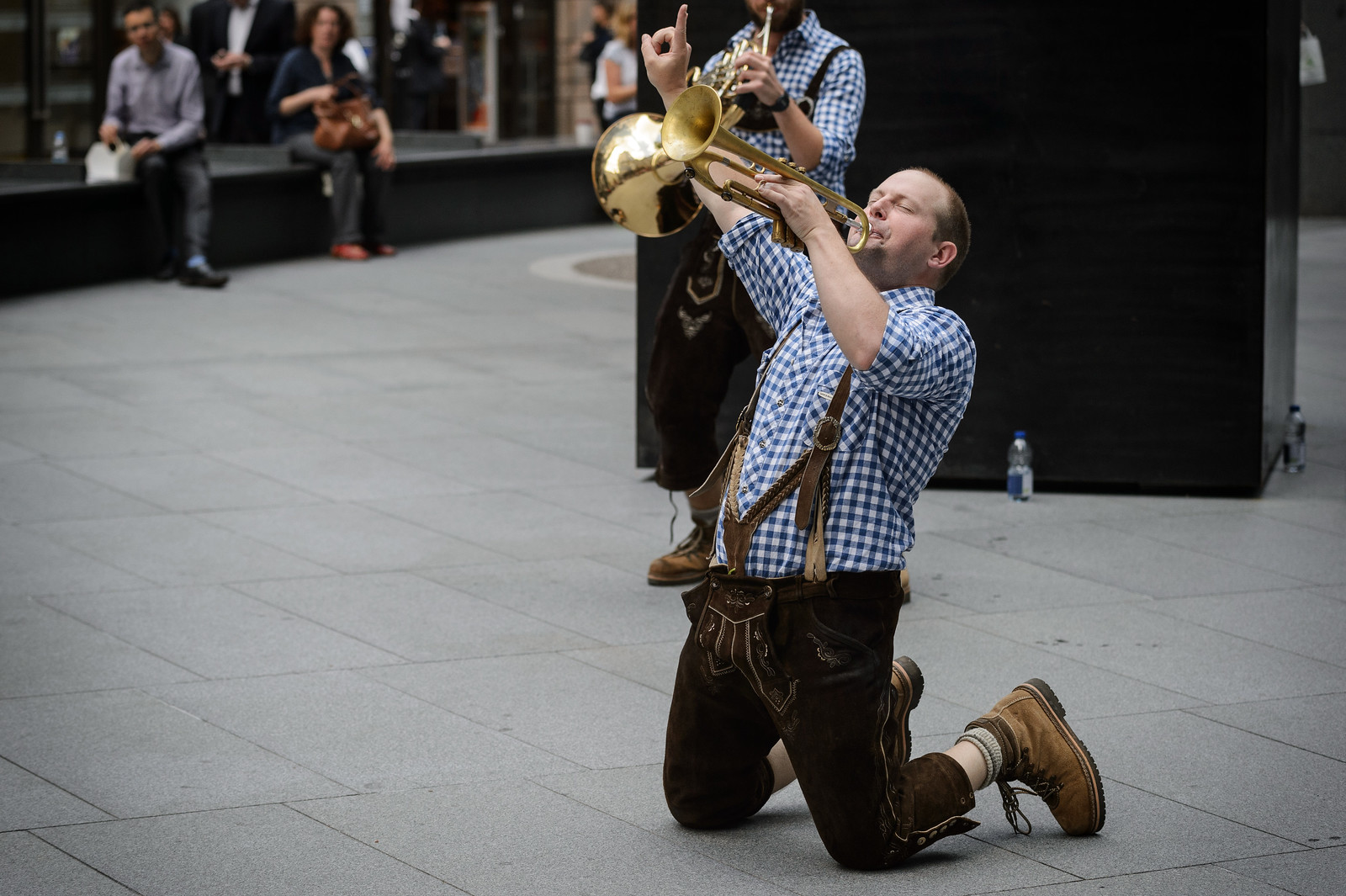 Anyway, to the subject matter. From late June until mid July, you are quite likely to stumble across live music, performance, and other live events in the City of London. Its the time of year that the City of London Festival runs. The enormous bowler hat in the picture is one of the stages for performances at this years festival – it was erected across paternoster square near to the Stock Exchange. 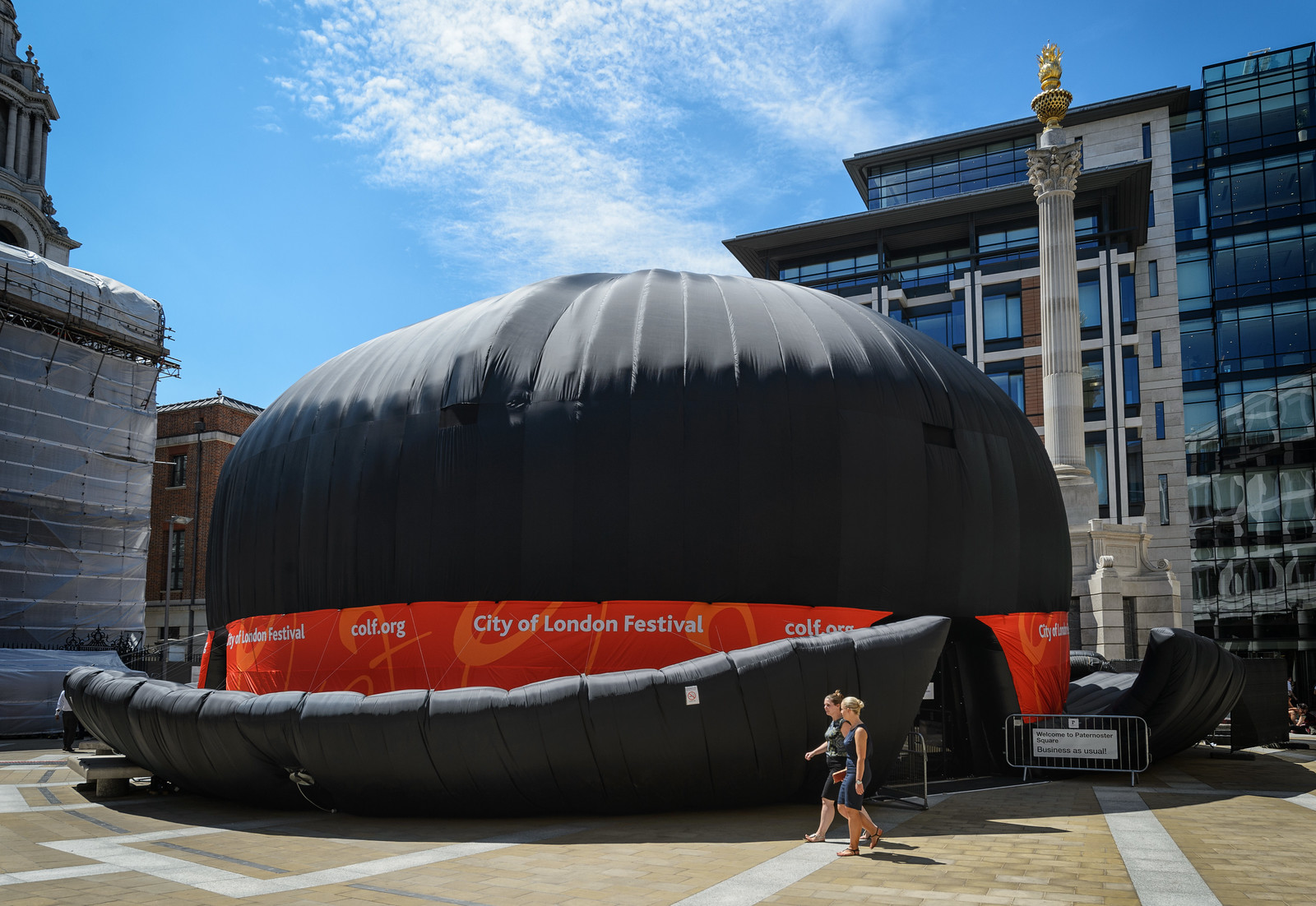 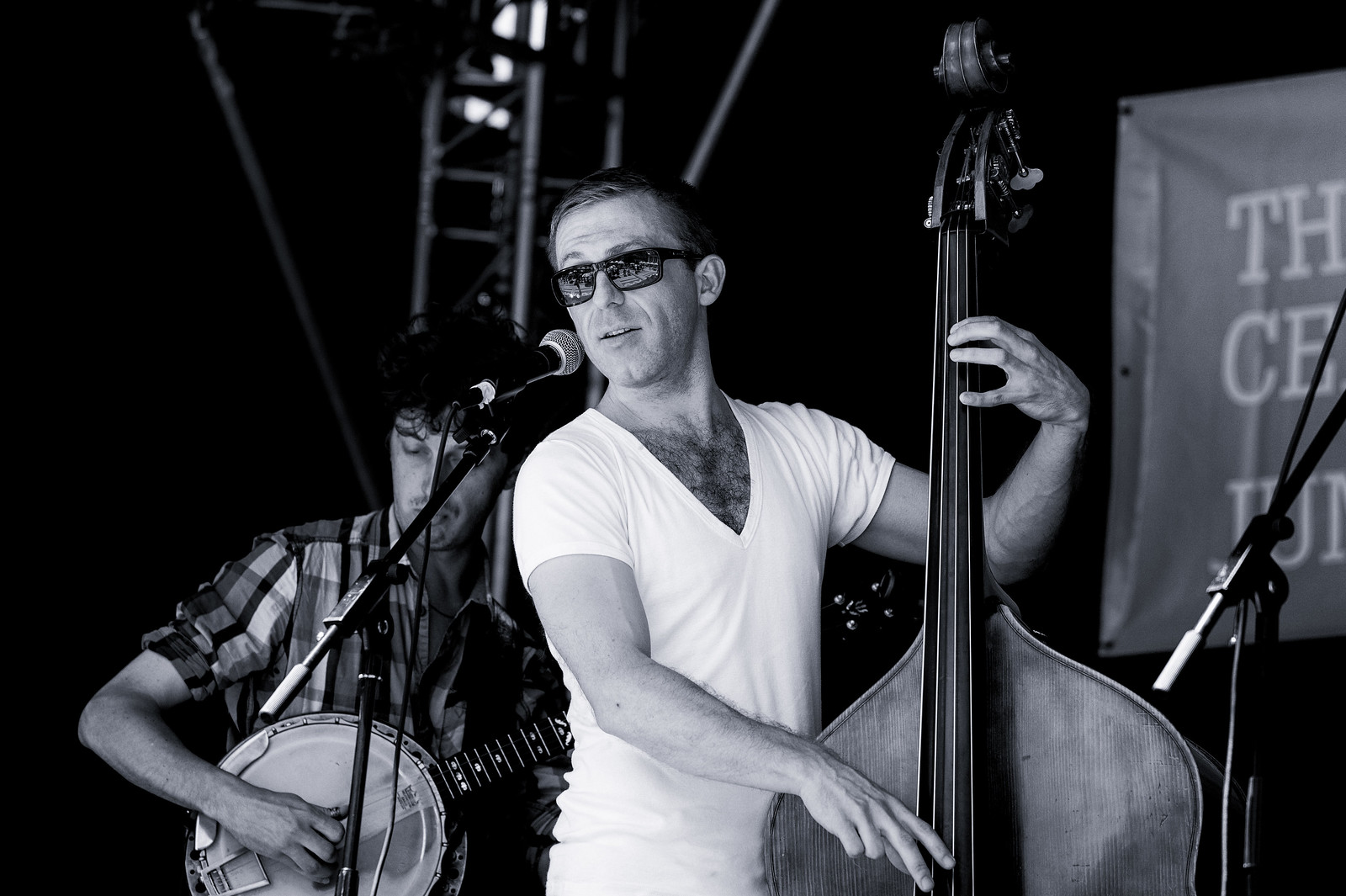 This year I visited 3 events, some folk music, a brass band and a steel drum band. All were great and I can only say that I always really enjoy and appreciate the money, time, organisation, commitment and energy that goes into organising the festival. It’s one of the things that makes coming into London in the summer such a pleasure. 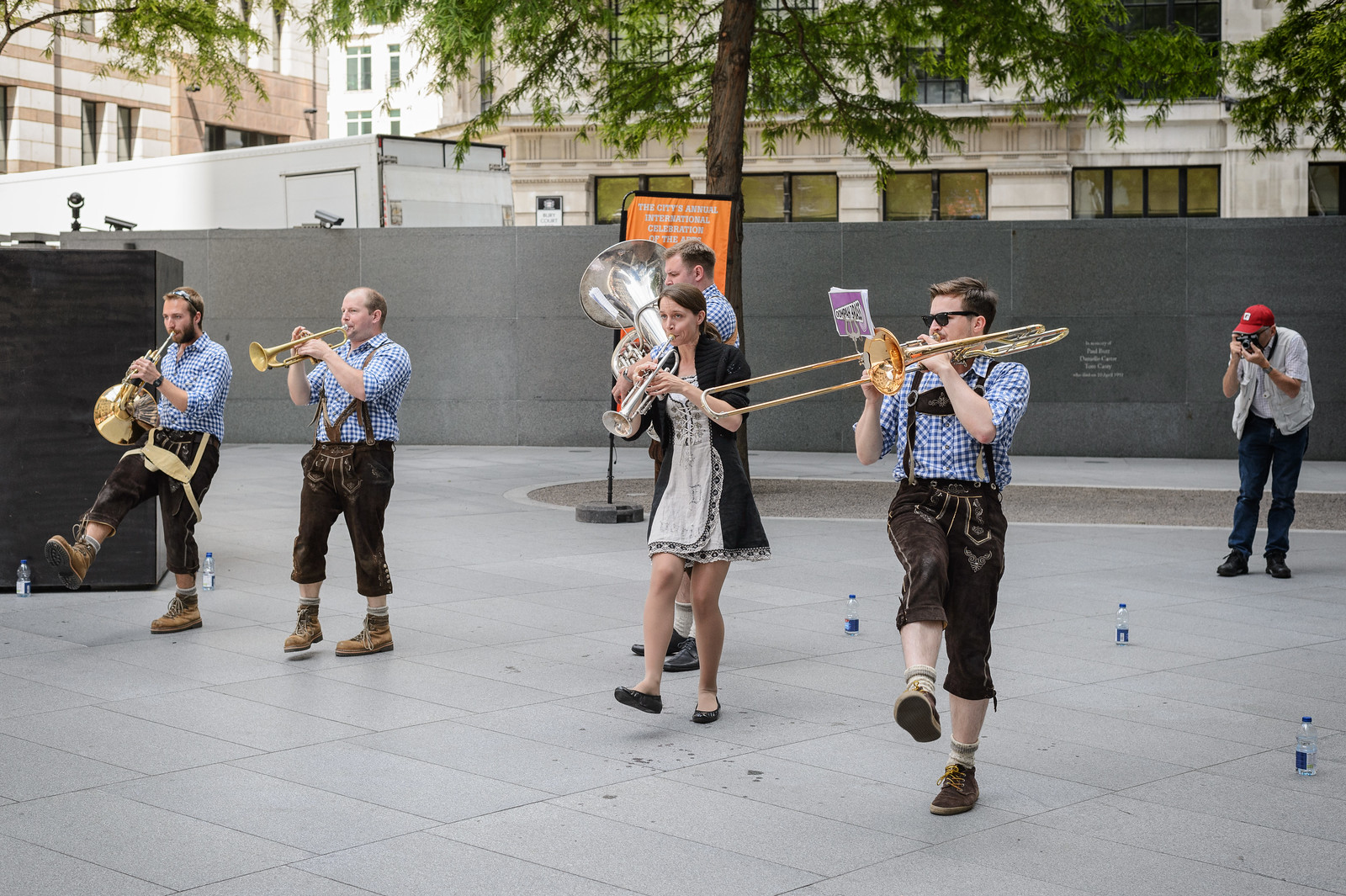 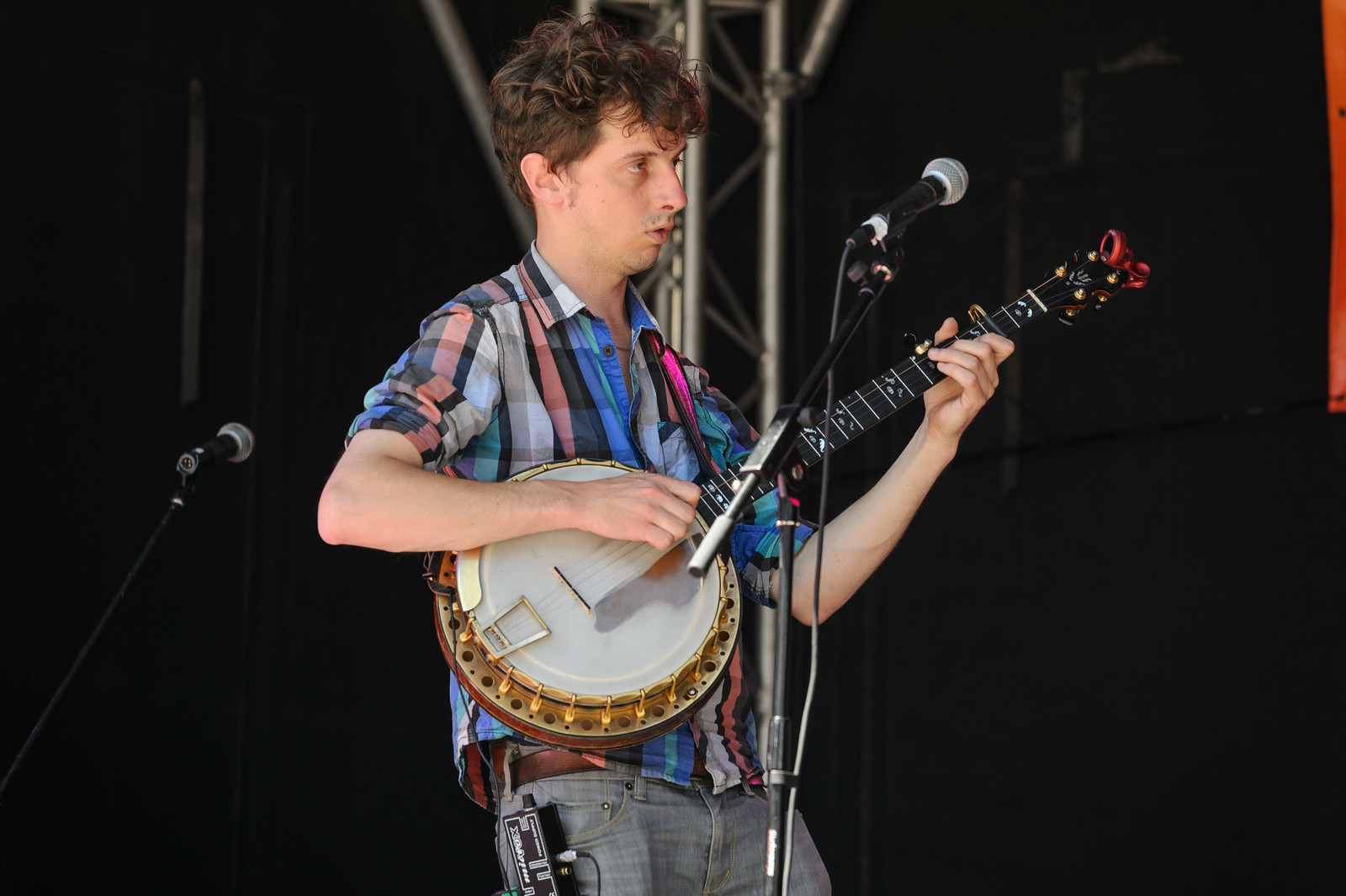 The brass band was “Oompah Brass”, a German style oompah band. Oompah Brass apparently started out with the firm intention of becoming a traditional German oompah band. However, they quickly realised that their interpretation of pop tunes carried more appeal than the waltzes, polkas and marches more usually seen from a oompah band. Their re-workings of songs such as Guns ‘n Roses’ ‘Paradise City’, Britney Spears’ ‘Toxic’, and Queen’s ‘Bohemian Rhapsody’ are outstandingly fun and were performed with enviable energy. 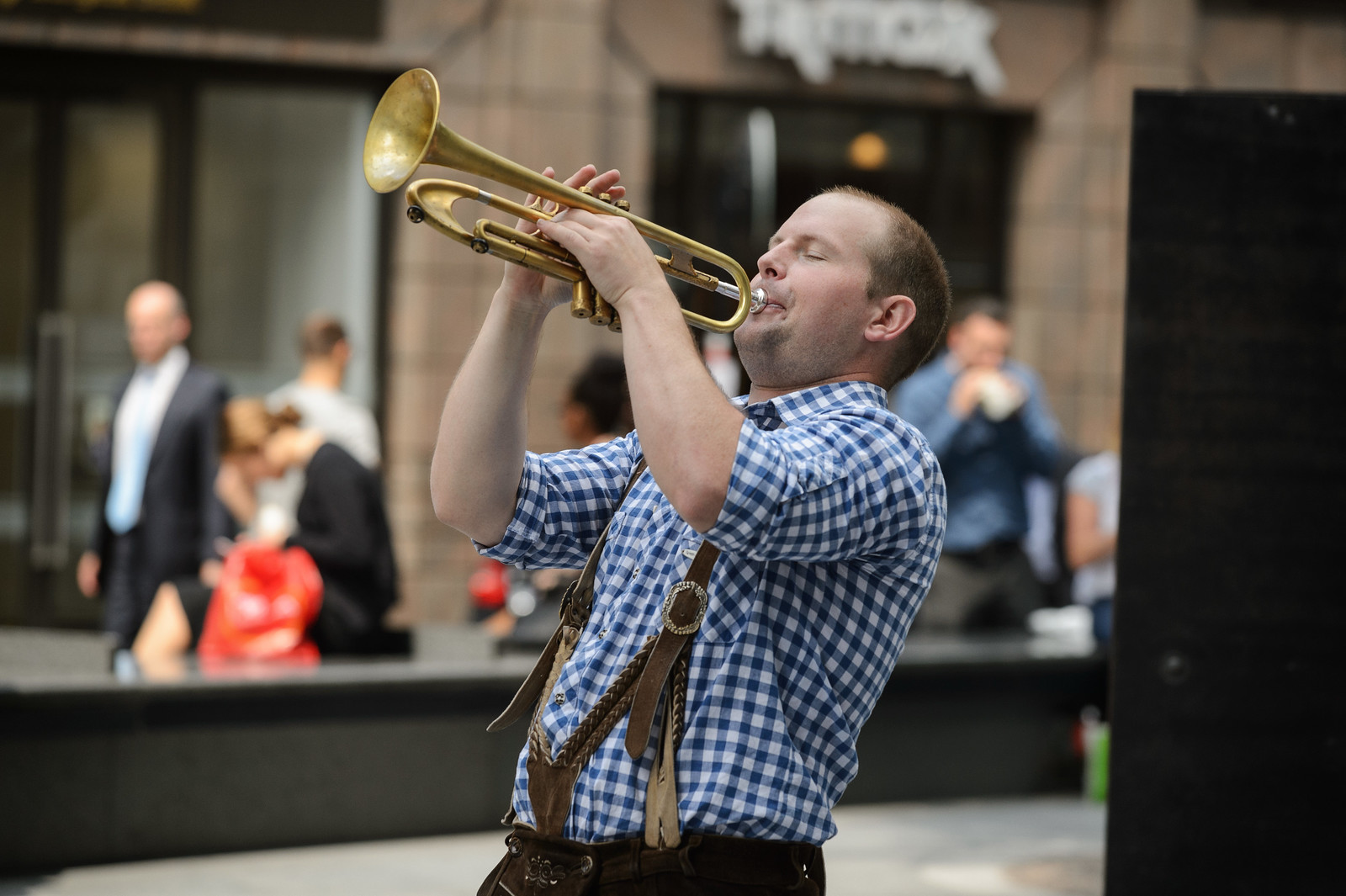 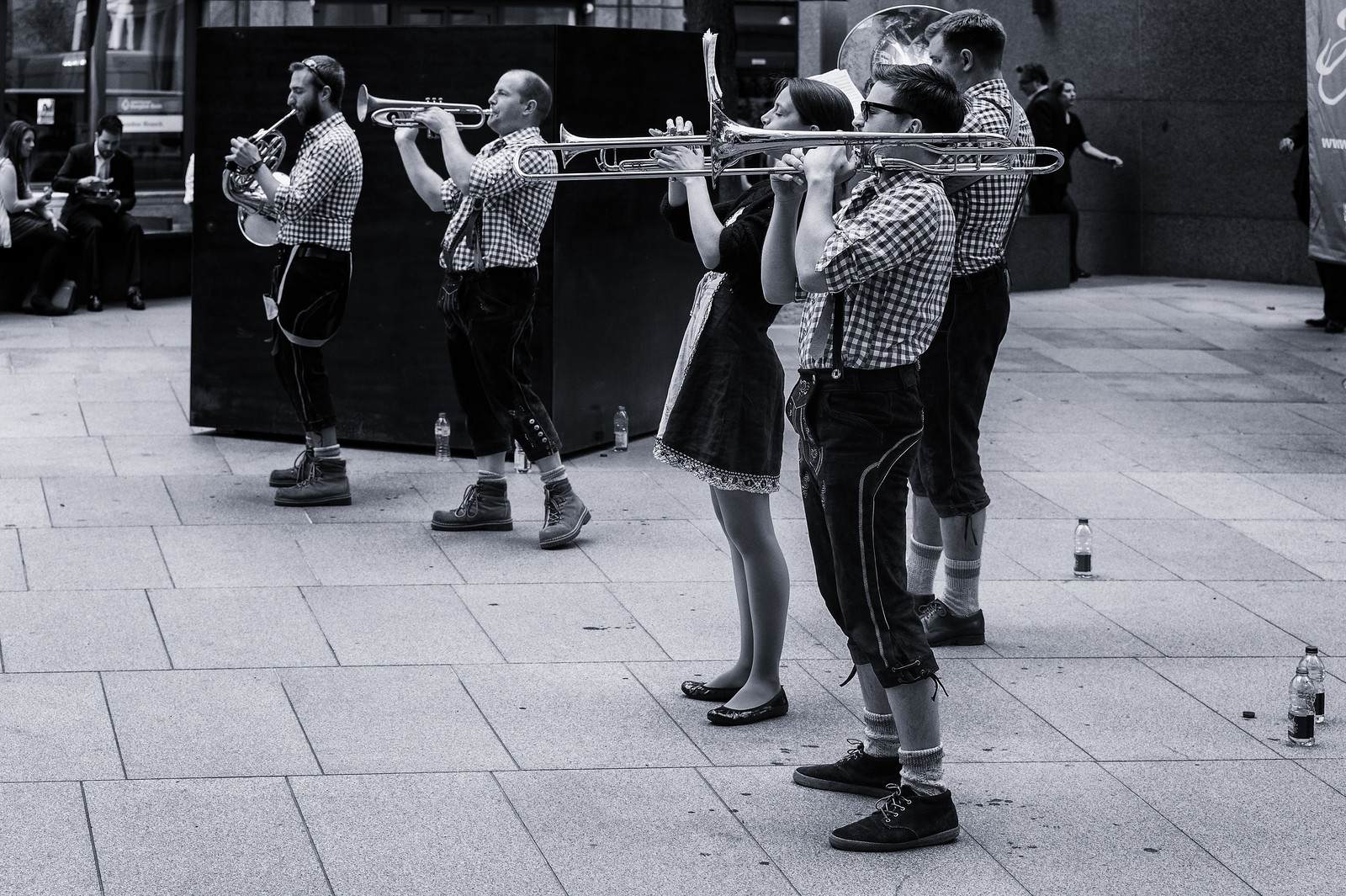 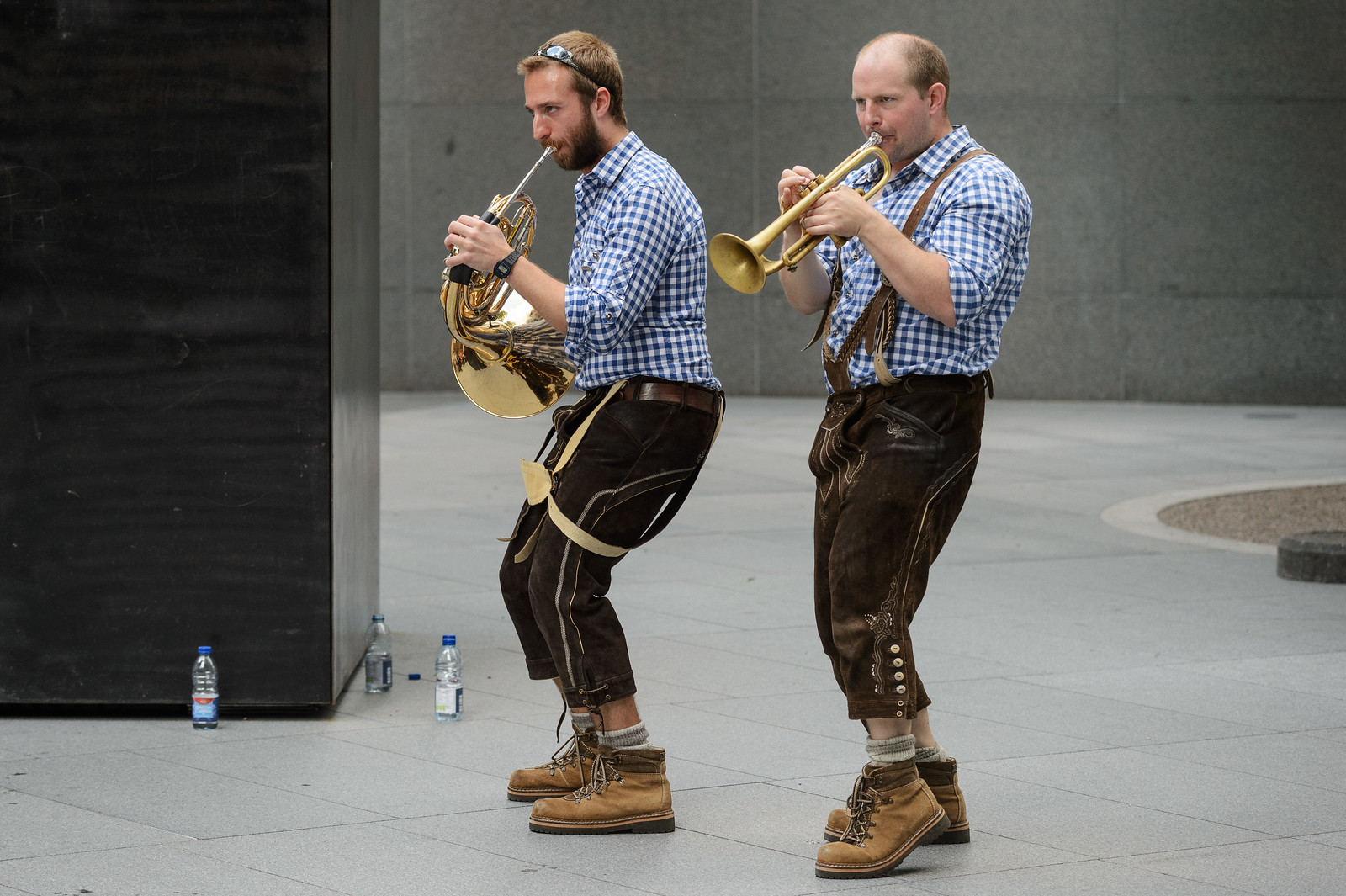 The folk music was from the Ragged Out String Band, somewhat in the style of Mumford and sons (one of my favourites from a few years ago) who play “hard driving uptempo old time mountain music”. It was great foot stomping stuff and given the city beer festival was on at the same day at the same venue (the Guildhall Courtyard) it was clearly helping the beers go down quickly! 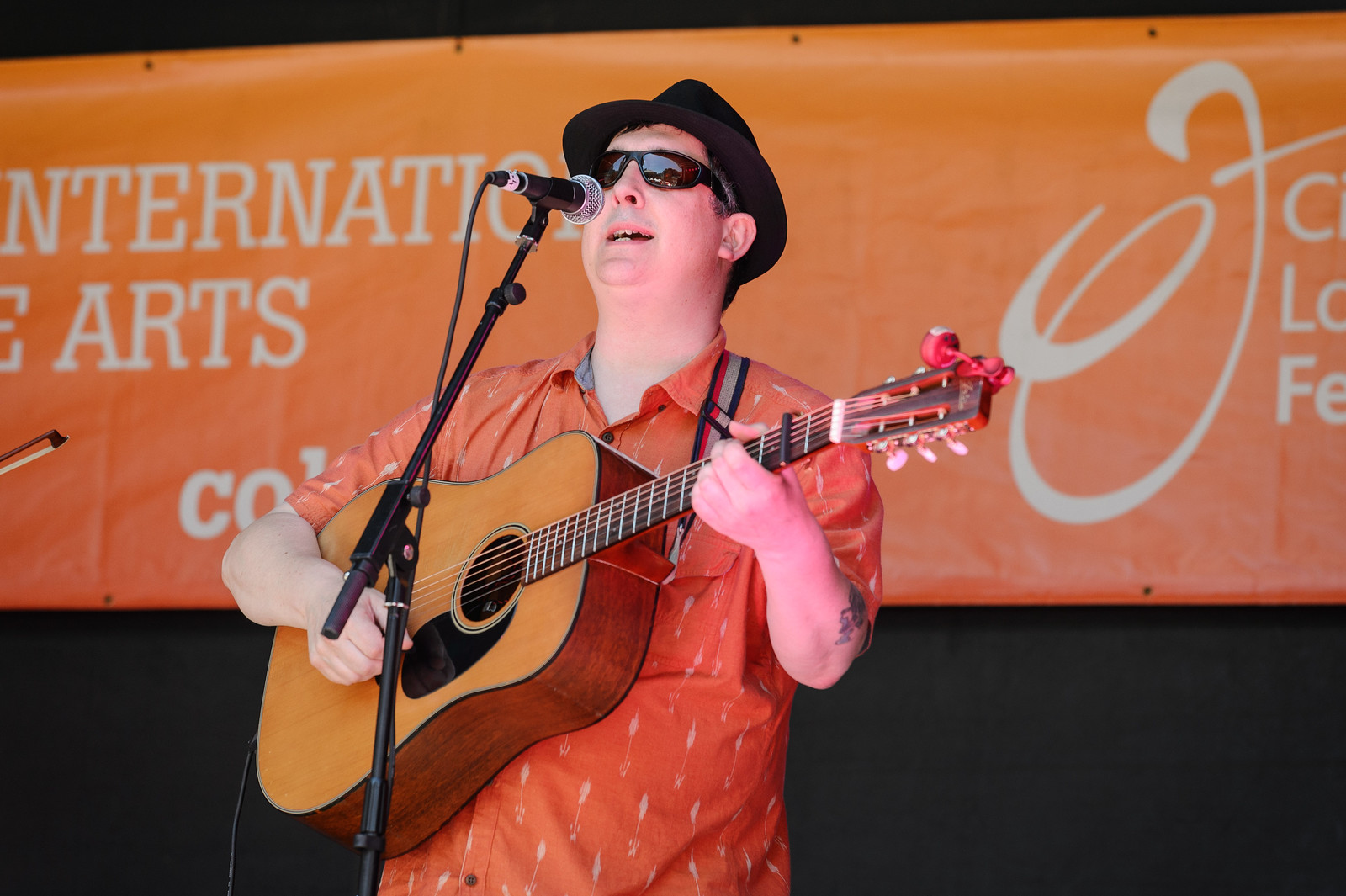 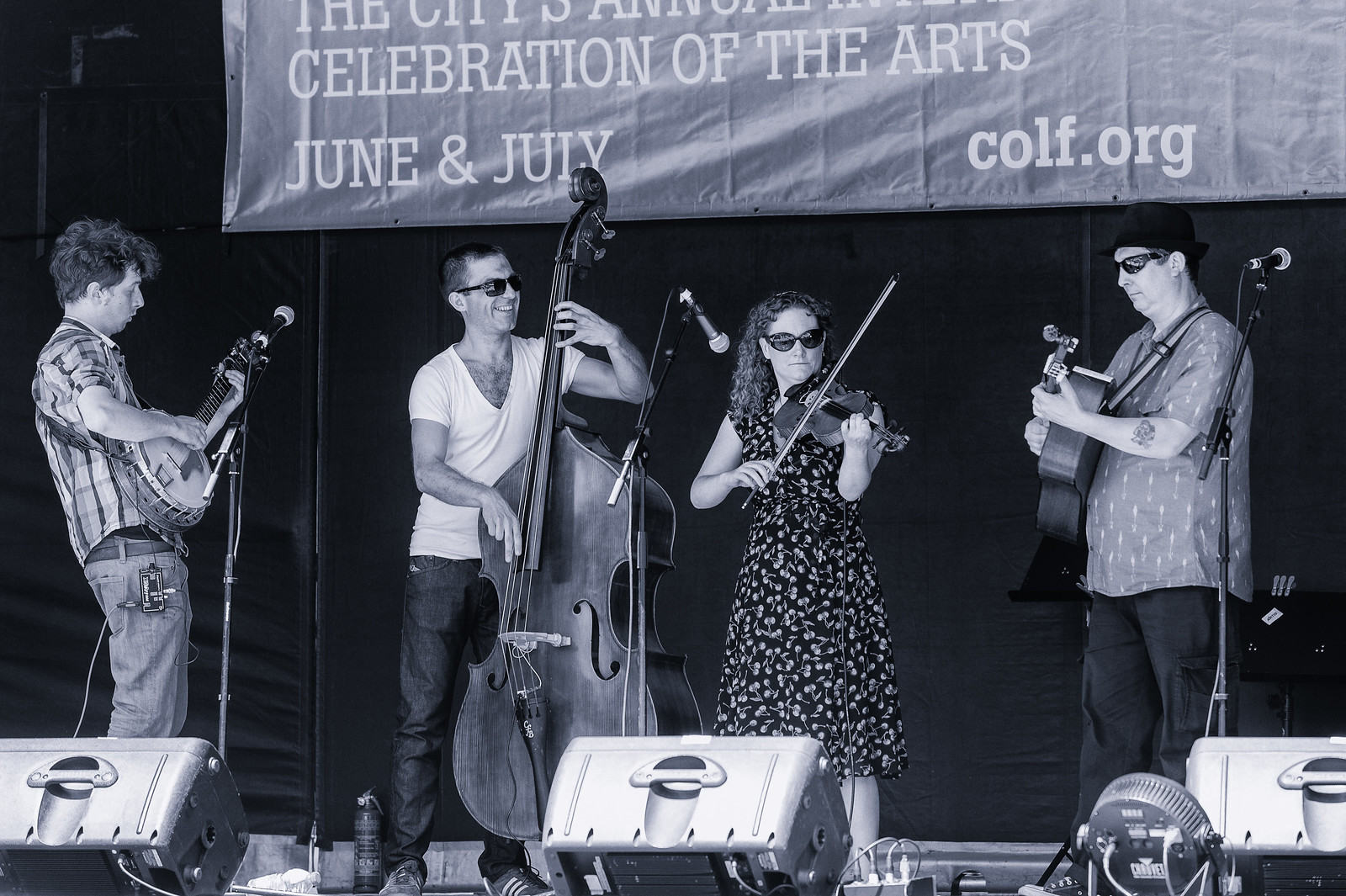 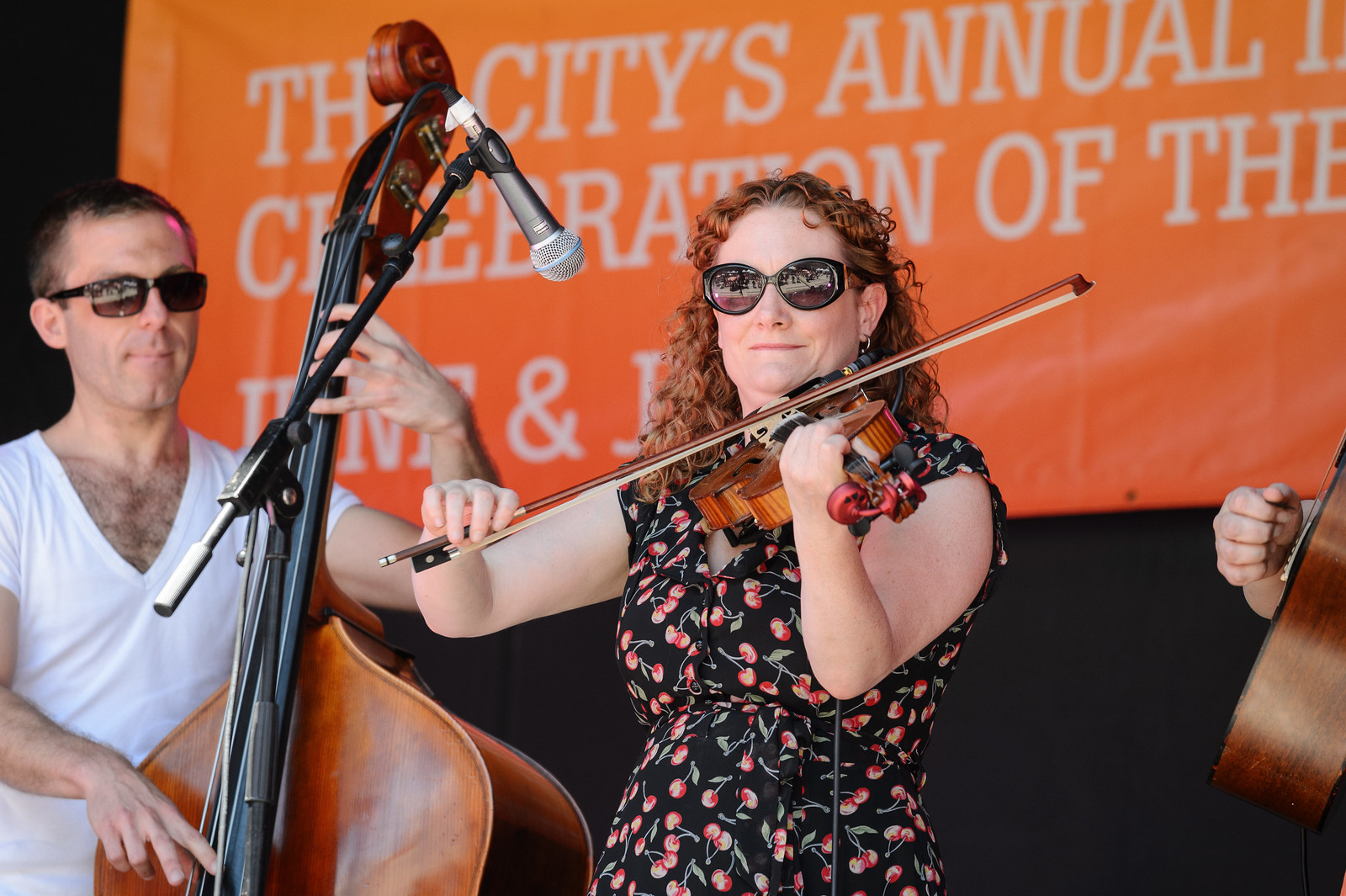 The Steel Band Music came from the Melodians Steel Band, a band formed in London in 1987 but playing on steel pans in the carribean style. They gave their performance lots of enthusiasm and it was great to see members of the crowd get up and start dancing to the beat of the drums. 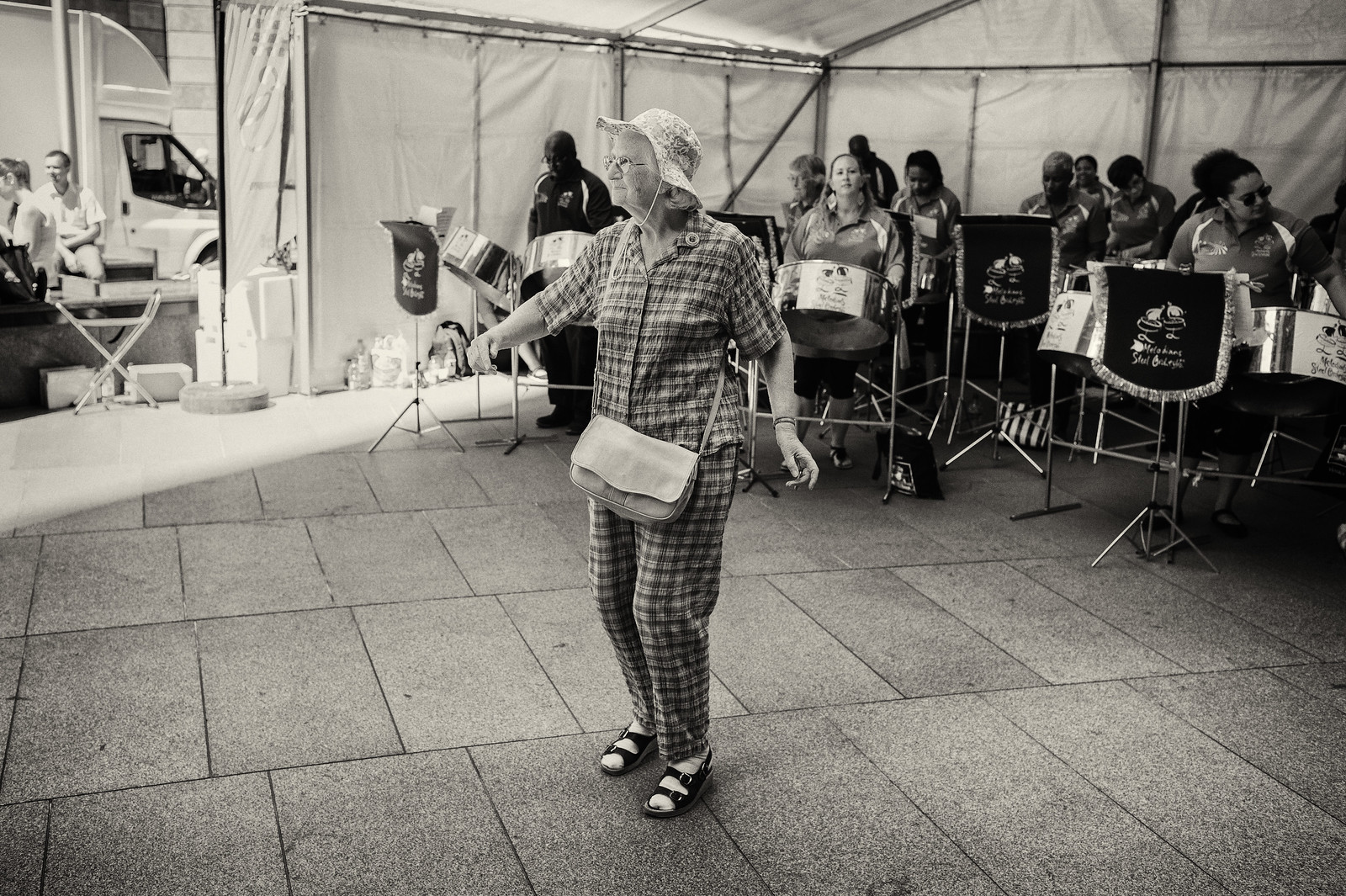 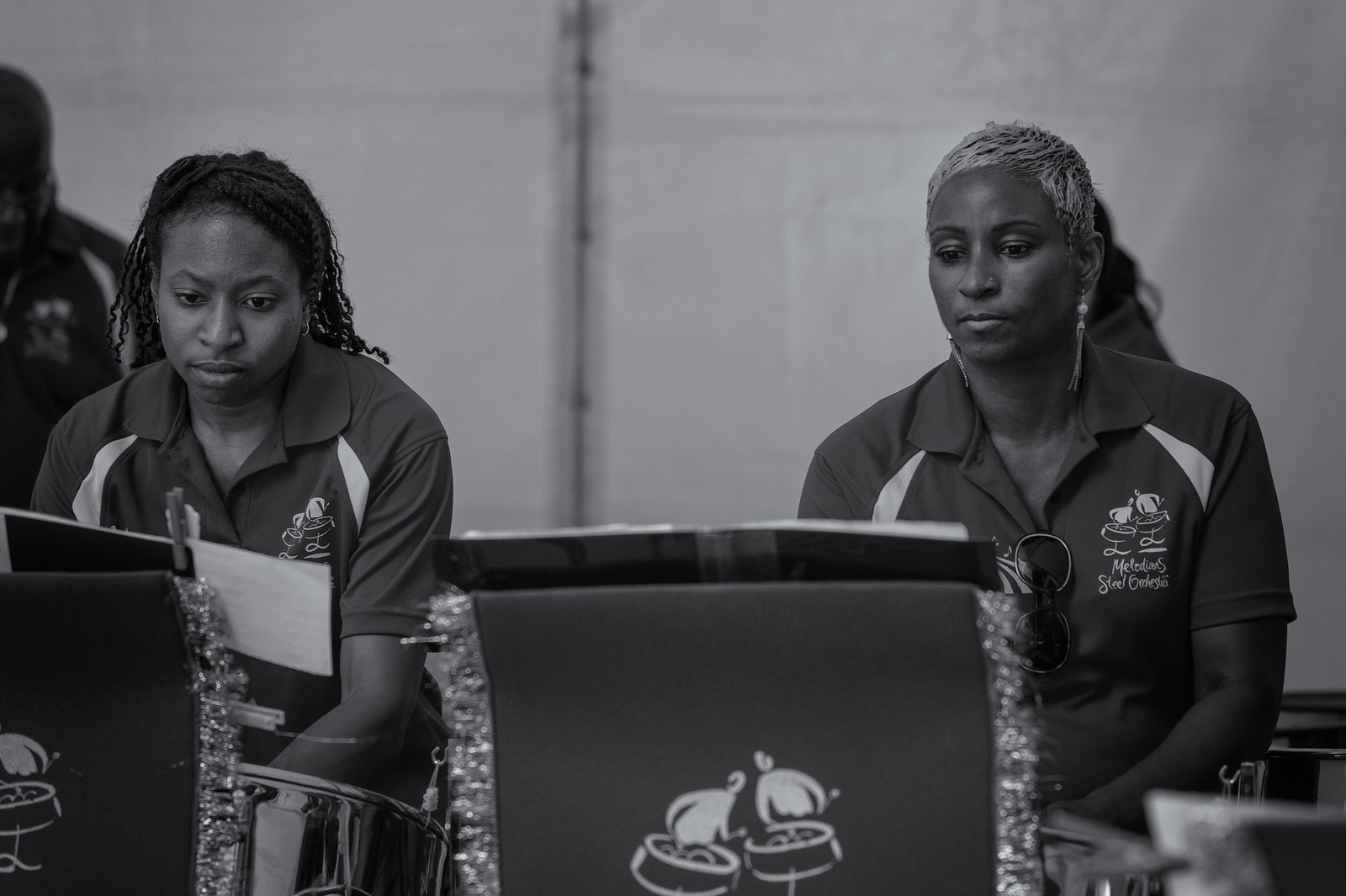 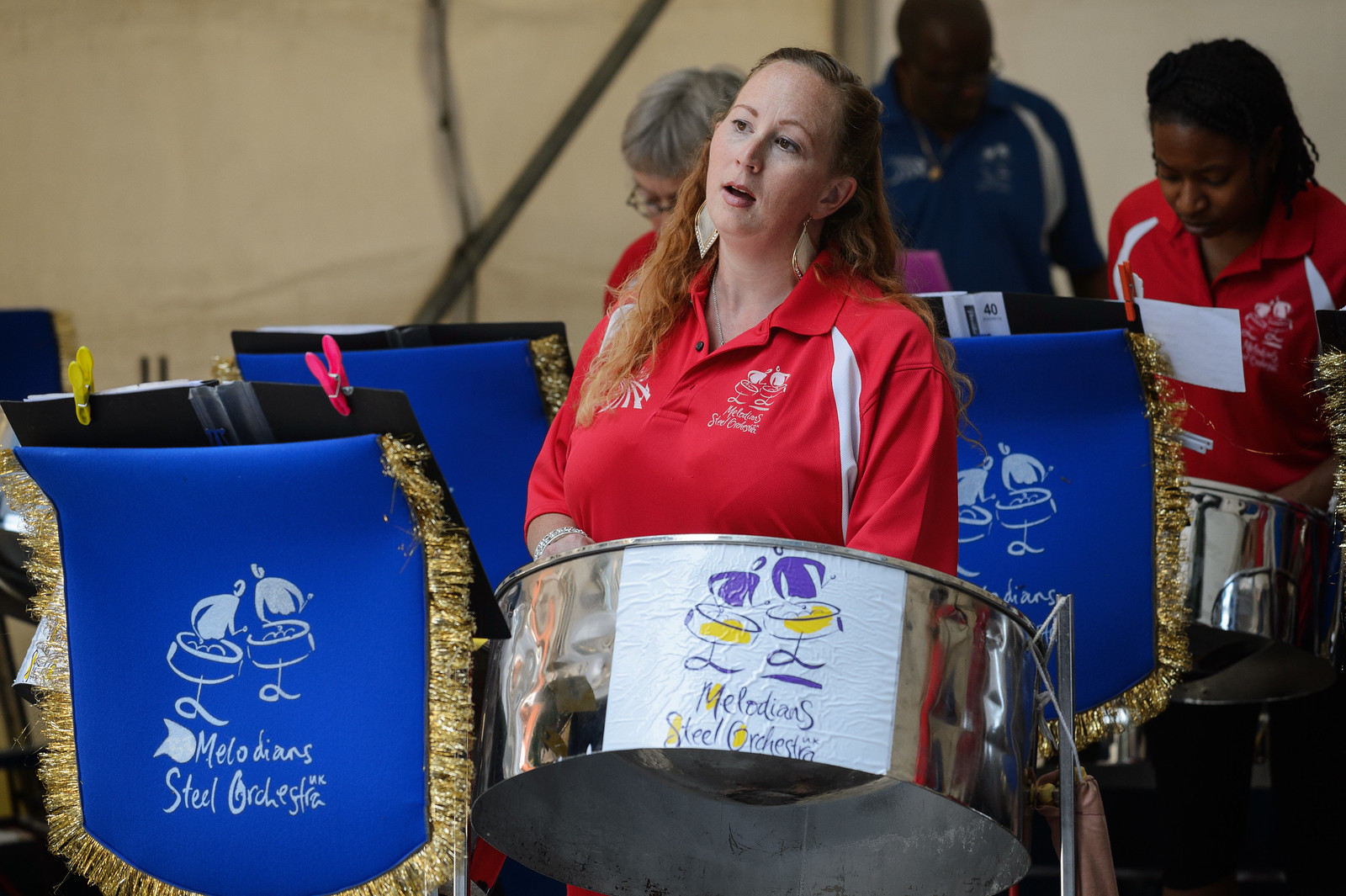 Sadly, their performance was slightly marred by a guy who I had thought was part of the support for the band who turned out (I think) to be a tourist videoing the performance. I can hardly be critical of someone choosing to capture the performance, but the reason I own telephoto lenses is that I realise not everyone likes having a camera rammed into their face while performing. This particular person didn’t seem to acknowledge that idea, standing a few feet from the performers while pointing a camera in their faces, although once he had been given a talking to by security he moved back to the main body of the crowd. Going back to my original note, its a pity that some people just have very little empathy for others involved in their interaction. As a photographer, if you miss that point, all you’ll have are pictures of people frowning (at best!). 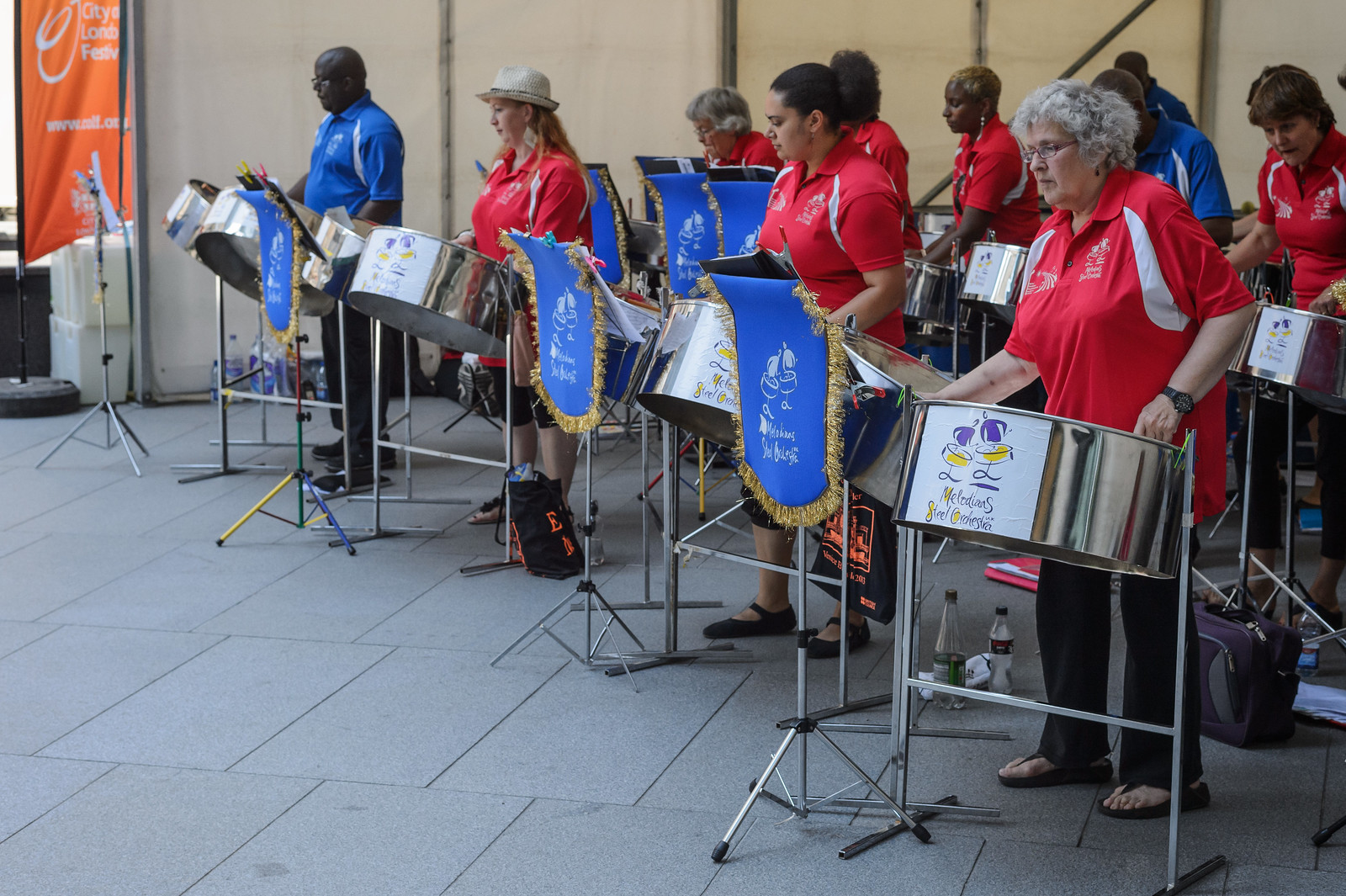 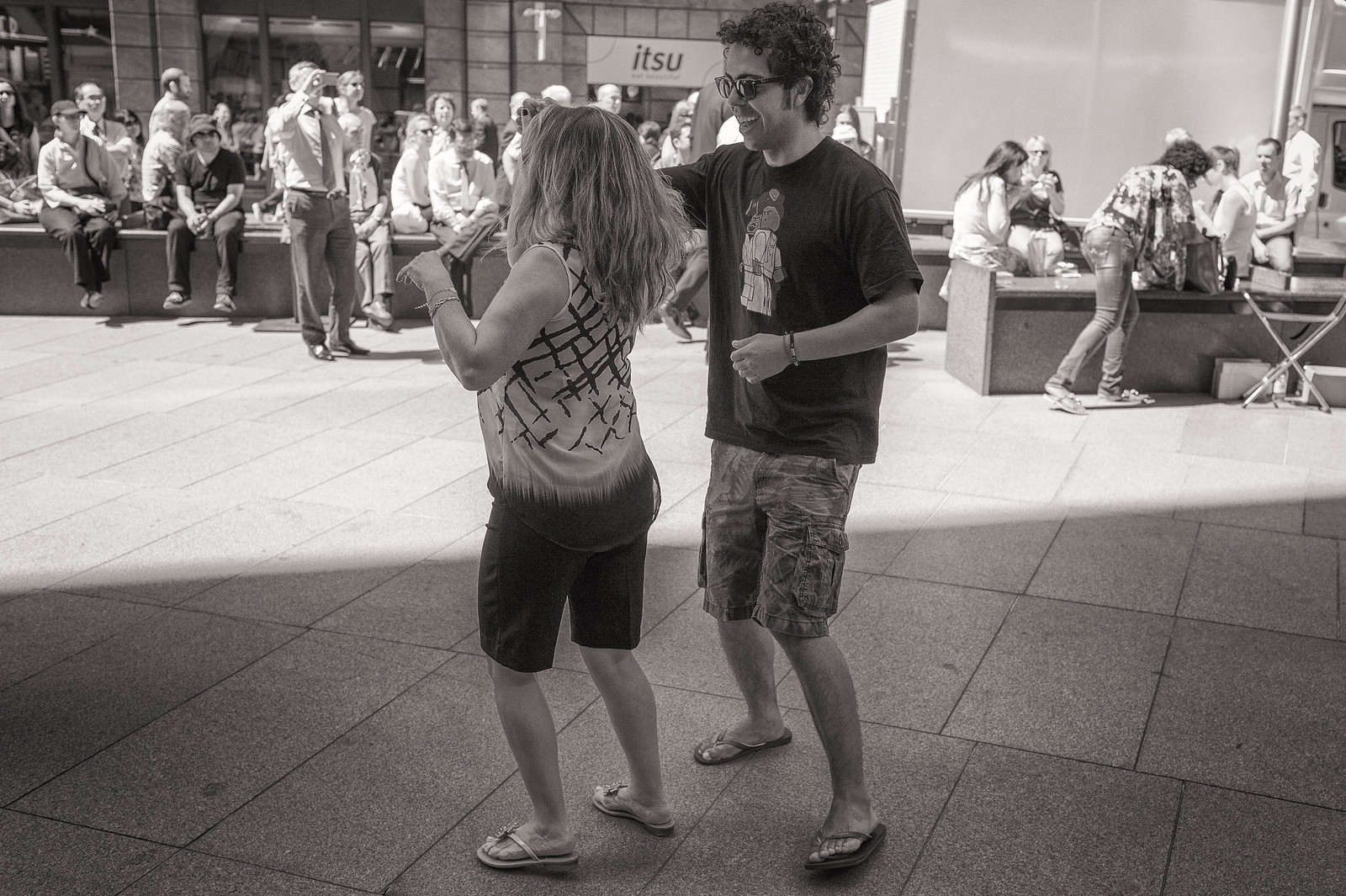 To finish on a more positive note, I will be looking forward to next years festival! You cannot beat live music. 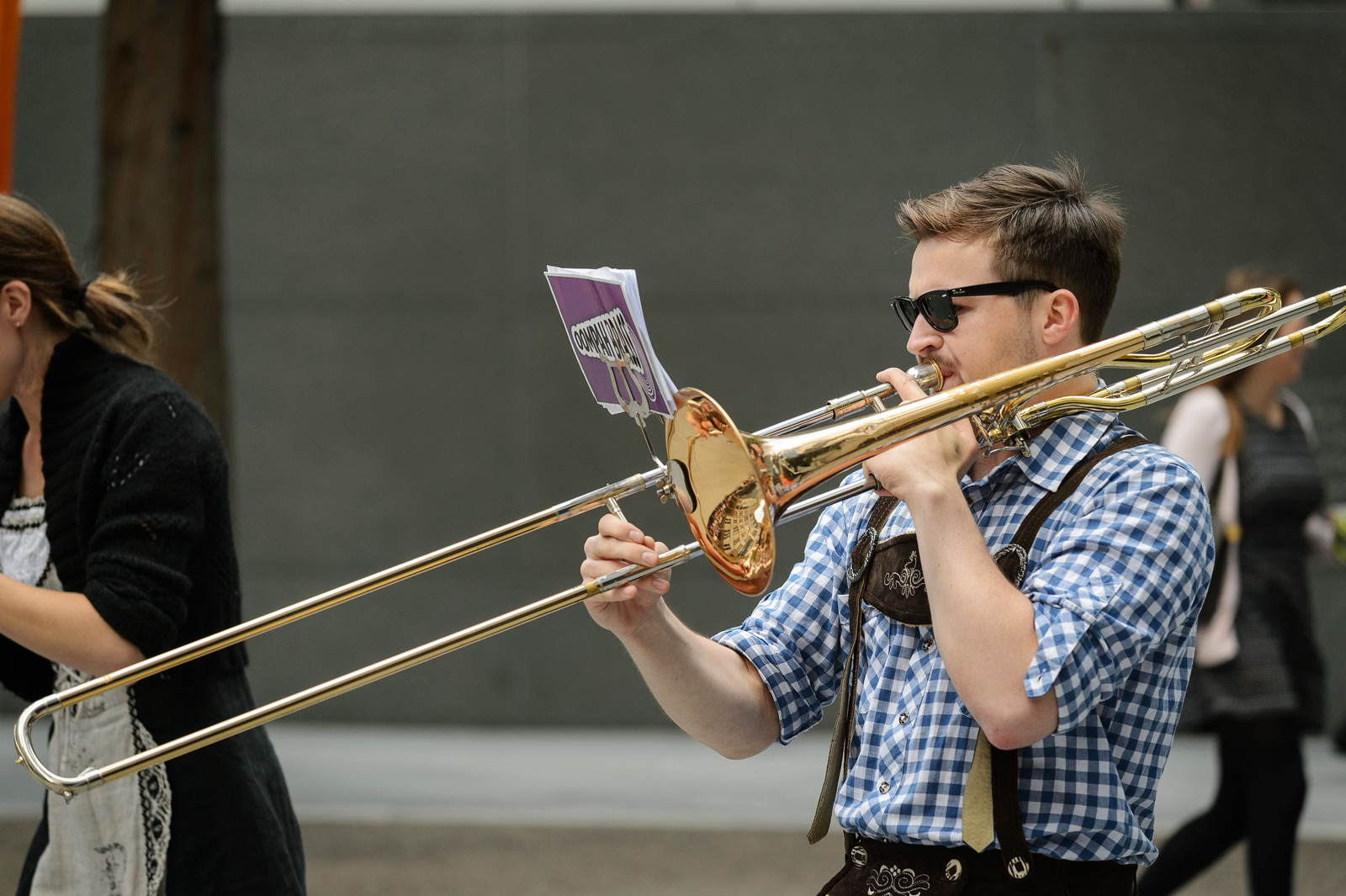 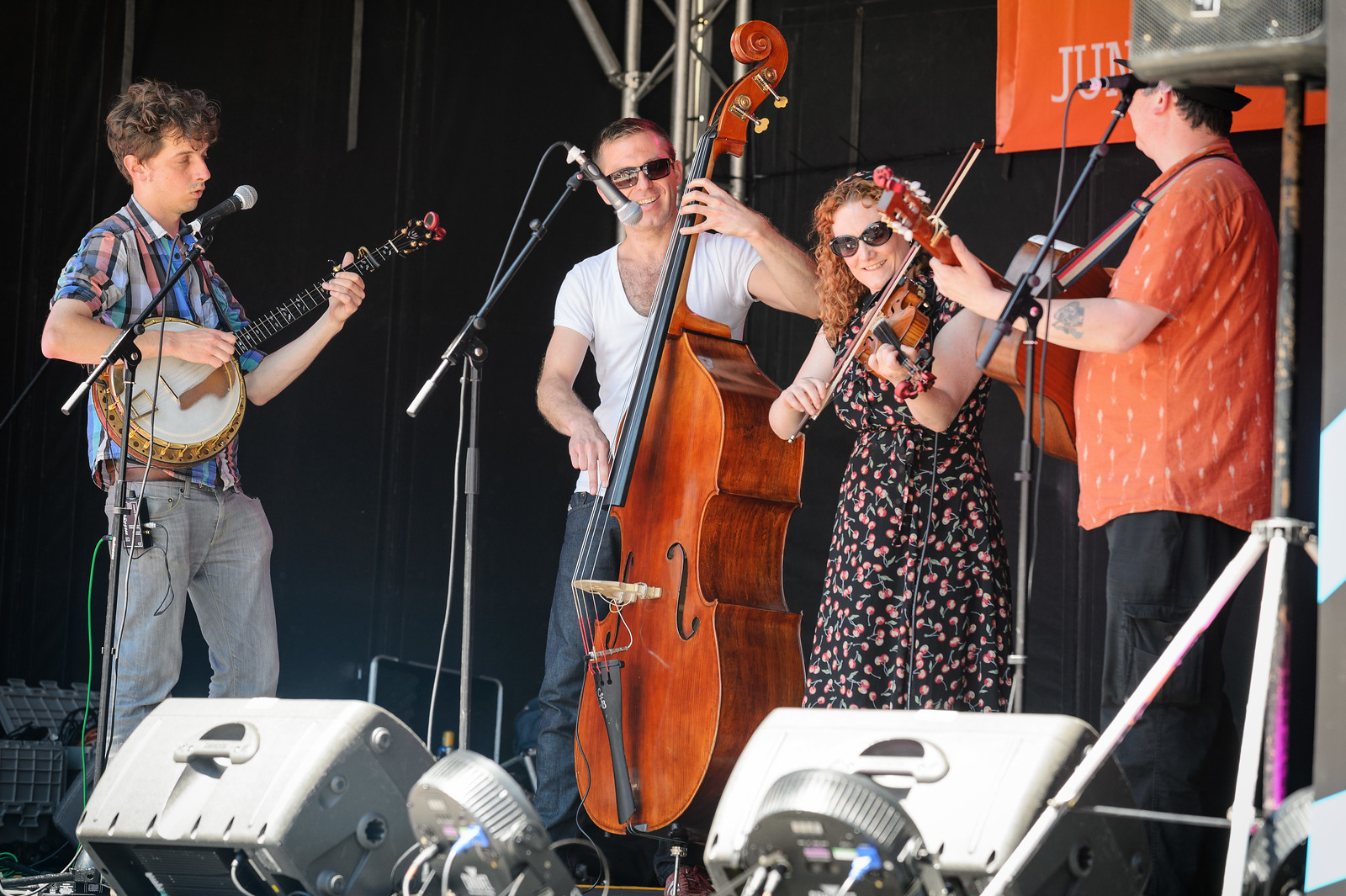 To give a brief comment on the camera and lenses, I’m still a huge fan of the 70-200 F4, particularly in combination with the Df, the sharpness colour and tonality are spot on (IMO). The continuous shooting capability of the Df is actually pretty good, but the buffer fills up too quickly for my liking. The 35 F1.8 is excellent too despite its tendency to oversaturate greens. I’m a bit less impressed with the 50mm F1.8 G than I was. I suspect the Sigma 50 and Nikon 58 have spoiled me, but I’m not convinced my copy of the 50mm F1.8 is that great (I remember my first copy being a tad sharper at wider apertures).